Oakland Warehouse Fire: 'It Was A Tinderbox. I Don't Recollect Anybody Coming Out.'

Oakland Fire Department says that nine were killed in the blaze, more than 30 missing. 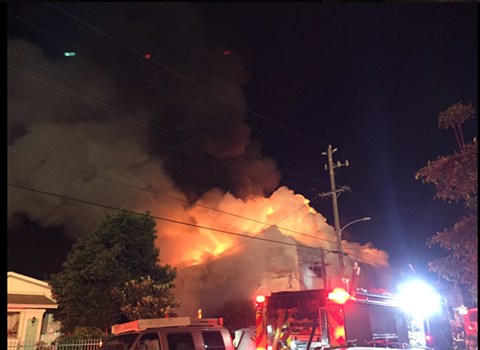 Seung Lee arrived at GhostShip for last night's dance party at exactly 11:09 p.m. Fifteen minutes later, he was out front, calling 911, those around him crying and screaming as they watched the artist warehouse and underground venue in Oakland's Fruitvale district go up in flames.

"It was a tinderbox. I heard the word ‘tinderbox’ used over and over afterward," he explained to the Express the morning after the fire. "This was probably the fastest, most largest, most furious fire I’ve seen in my life."

"It was just relentless, I don’t recollect anybody coming out.”

The Oakland Fire Department is reporting at least nine people died in the fire last night, which started just after 11 p.m. Officials anticipate at least 40 dead at the scene.

A Google Spreadsheet started by attendees and friends lists 42 individuals as missing. Reports state that there were no fire alarms or emergency sprinklers inside the venue (see more photos from inside Ghostship here).

The Express has also learned that several complaints against the building were filed with the City of Oakland, and that inspectors appear to have recently visited the warehouse.

The giant warehouse is located in a residential part of Fruitvale, just north of Interstate 880. Lee arrived with friends, hoping to pay the $10 rate of admission to the night's set by Golden Donna. But those operating the door said he was too late for the discount rate, and wanted to charge him $15. Lee looked at his phone: 11:09 p.m.

Eventually, he talked his way into only paying 10 bucks for his group, and they entered the warehouse, which houses the underground venue GhostShip and also Satya Yuga artist collective.

Inside, Lee described the building as a giant maze. "[There were] tons of corridors, that kind of went into little hideaways," he said. "At the end of the corridors are couches, and chairs and tables where people are just sitting lounging around.”

"It was very much like a labyrinth," he said. "“I got lost … during the time I was in there." He estimates that there were about 70 people inside at the party.

The floors, ceilings, rafters, corridors are all made of wood inside the warehouse, which is strewn with antique furniture and books, among other items. 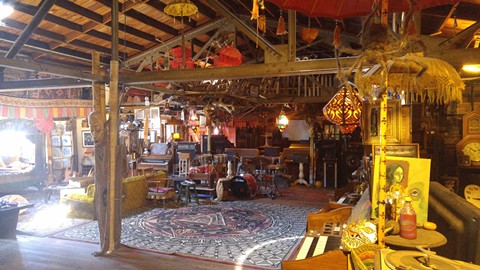 Lee said that the main party was a on a second floor, where lights hung from the rafters and up to 30 people were dancing to deejay music.. This area was referred to by his friends as the "rave cave." 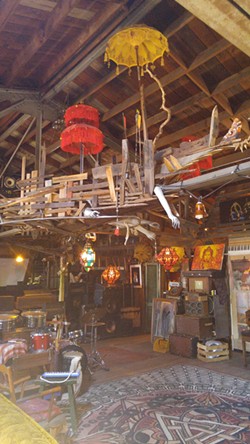 He says there was only one staircase leading to the upstairs, “and it was made out of pallets and other wooden [pieces]." He says it was not sturdy and very poorly built. “I was coming down the second floor, and I actually twisted my ankle a bit coming down," he recalled.

He says he did not see any smoke or people smoking cigarettes inside the building.

After approximately 10 minutes, Lee and a friend decided to leave to the corner market to get drinks. When they returned, the warehouse was engulfed in flames and smoke was pouring out of the building. He called 911 at 11:24 p.m., according to the log on his cell phone.

“The fire was going very strong. You could see a flame coming out from the second window in the back, by the time I arrived.”

He also says he didn't see anyone running out of the building by the time he arrived.

"By that time it was pretty clear that the size of the fire was enveloping the entire building. I feel like those who made it out, already made it out, and those who didn’t probably didn’t make it out by the time I arrived.

“That’s the toughest part, remembering the cries and the wailing."

Here's video from a dance party at Ghost Ship this past June: