Time To #DeleteUber In Oakland

The company’s attempted sabotage of taxi drivers supporting immigrants should doom its move to Uptown. 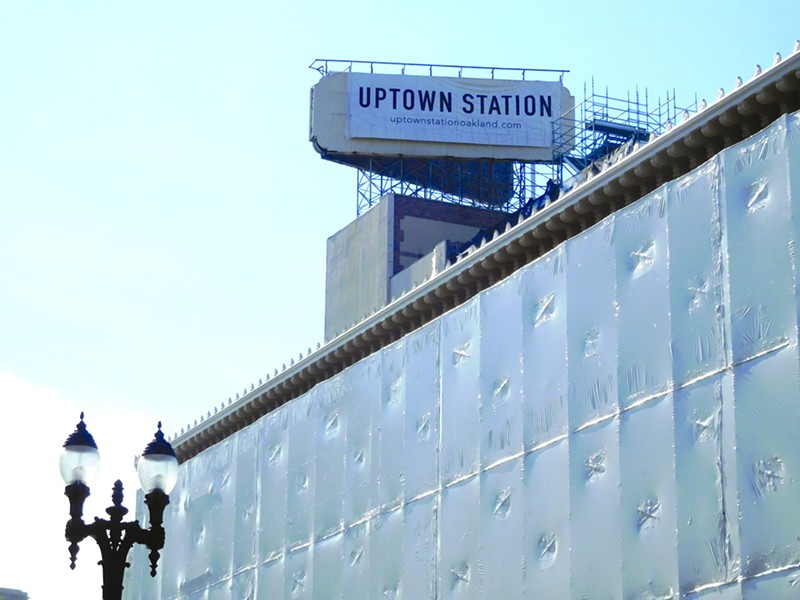 Last weekend, Americans continued their extraordinary resistance to the early days of the Donald Trump presidency. Enormous, and generally extemporaneous, outpourings of love erupted in support of immigrants. Yet standing with Trump against the people was Travis Kalanick and his company, Uber, which is developing a large corporate headquarters in Uptown Oakland in the old Sears building. Uber’s actions are contrary to the values of our town. We don’t need them in Oakland. They should sell the building.

From Alabama and North Carolina to New York and California, people flocked to airports to express support for immigrants and those seeking to come to the United States, and to stand against Trump’s newly inked ban. The beautiful solidarity and resistance to his cruel acts may be the start of a new unified movement. Time will tell.

But one thing is certain: This resistance is separating the wheat from the chaff among those like Uber, whose CEO claimed on Saturday to “stand up for what’s right.”

Uber’s latest example of appalling action came in New York. There, unionized taxi drivers held a sympathy strike, as an “act of consciousness and solidarity,” according to Bhairavi Desai of the N.Y. Taxi Workers Alliance. For a short period drivers refused to take passengers to or from the international terminal at JFK airport. In a statement, the union, an affiliate of the national AFL-CIO, wrote that its nearly 20,000 members “stands firmly opposed to Donald Trump’s Muslim ban. As an organization whose membership is largely Muslim, a workforce that’s almost universally immigrant, and a work-class movement that is rooted in the defense of the oppressed, we say no to this inhumane and unconstitutional ban.”

The N.Y. cabbies exhibited the kind of working-class strength that we often see at the Port of Oakland, where workers actively fight for their economic needs, as well as the political matters that affect our community. Port workers, for example, have held a number of work stoppages in solidarity with those confronting police brutality. This kind of melding of economics and politics at the workplace is historically one of the most powerful acts of resistance.

In New York, the union encouraged drivers for Lyft and Uber to join in. But in response, Uber management decided to try and break the strike, tweeting out that they were reducing prices at JFK.

As Desai from the union told Democracy Now, “Uber as a company sought to take advantage of our strike.” Uber’s action was anti-immigrant and strike-breaking, pure and simple.

And Uber’s work to diminish and profit from the JFK strike came on the heels of Kalanick joining the Trump business advisory cabinet.

When news broke of strikebreaking on top of its Trump embrace, the hashtag “#DeleteUber” began trending on Twitter. In response Uber’s PR department tried to flood Twitter with sponsored tweets claiming, in a true Orwellian sense, that they were “Standing Up for What is Right.”

But it’s too late. Kalanick has already told employees that he wants to “partner” with President Trump. Uber’s “standing up for what’s right” includes active collaboration with Wal-Mart and others in Trump’s business-advisory group, which is helping the president work on “how governmental policy impacts economic growth, job creation and productivity.” Enough said.

There are many reasons why Uber should not come to Oakland. This city, like others in the East Bay, is a laboratory for how to build a diverse, progressive community that thrives in a business-dominated country and a complicated world. Uber’s presence is sure to impede this people-centered movement.

Uber’s values stand in opposition to ours. Many see this. This week, the group Tech Ladies canceled a diversity event with Uber, which was scheduled for March. In response to Kalanick’s embrace of Trump, founder Allison Esposito wrote of her group’s decision that it’s “dangerous to pretend that issues of bullying, sexual harassment, racism and sexism exist in a vacuum.”

In our communities we abhor racism. Yet a recent study by the National Bureau of Economic Research found a “pattern of discrimination” from Uber, one in which Blacks are more likely to face longer waits as well as cancellations more than twice as frequently as whites.

Here, we teach our kids not to be bullies. Oakland schools spend much time on anti-bullying programs. Yet bullying is part of Uber’s business model.

Late last year, Uber thumbed its nose at California and San Francisco transportation authorities by putting driverless cars on S.F. streets as a test. It took a ferocious response from shocked state regulators to back them down. Such greedy arrogance does not need to be present in our city.

We teach our kids to be honest. Yet Uber’s dishonesty is startling. A couple of years ago, Uber was claiming that the median New York driver made $90,766. It recently agreed to a $20 million fine from the Federal Trade Commission for its dishonesty. Uber of course did not admit to the charges.

In the Bay Area, Uber has claimed in ads for drivers on Craigslist that they would make $29 an hour. The FTC found that fewer than 20 percent of local drivers earned that wage. Pay is so bad that many Uber drivers who try to make a living are being forced to sleep in their cars, according to a recent Bloomberg Technology investigation.

We believe that jobs should support families, not impoverish them. Yet Uber is leading the attack against employee benefits — the very benefits necessary for working families trying to get by. Since the Great Depression, workers have had some protection from workplace injuries and job loss, because of programs such as workers’ and unemployment compensation. Uber, however, is stridently fighting those protections for its drivers, using legal fictions to claim each driver is a little company of their own. While recent reports show that Uber is losing hundreds of millions of dollars operationally, it earns millions by its refusal to pay these normal amounts as well as by forcing drivers to pay the employer portion of social security taxes.

Uber should complete the construction of the Uptown building and sell it. The company does not respect the values and people of our town. We should not welcome them, either.