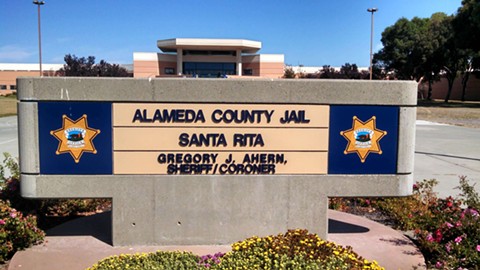 News you don’t want to miss for Halloween:

2. An inmate also at Santa Rita Jail died last weekend after ingesting an unknown substance, KTVU reports. It’s the eighth time this year that a prisoner at the jail has died while in custody.

4. Here’s a top-notch lede from Mattias Gafni in the San Francisco Chronicle: “Say what you will about Russian interference, it just might get us Northern Californians out of this year’s precarious fire season.” Rain is brewing in somewhere over Russia and forecast to fall in Northern California around Nov. 10. $$

5. Not a good sign for Sen. Kamala Harris’s struggling presidential campaign: Politico reports Harris is cutting staff at her Baltimore headquarters and reshuffling others to Iowa.

6. A potentially dismal season just got worse for the Warriors. Stephen Curry broke his left hand during last night’s loss to the Phoenix Suns, the San Francisco Chronicle reports. $$

7. In observance of Halloween we present the tale of the Niles Canyon Ghost. Legend has it that she wanders the dark, woodsy road near Sunol, still wearing her white prom dress. Will she ever find the date who murdered her?