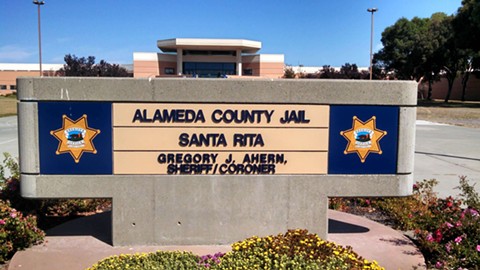 News you don't want to miss for July 16:

1. An attorney alleges there is an outbreak of about 40 covid-19 cases at the Santa Rita Jail in Dublin, primarily among inmates working in the kitchen areas, KTVU reports.

2. Alameda County District Attorney Nancy O'Malley found Alameda police officers who arrested a black man for exercising in the street last May did not follow protocols, but neither will be charged for wrongdoing, East Bay Citizen reports.

3. Richmond named Bisa French to be its next police chief, the East Bay Times reports. French, who has served as interim since last September, becomes the city's first black police chief. $$

4. Eight Cal student-athletes have tested positive for the coronavirus, including five announced this week, after returning to campus for practice, Sports Illustrated reports. The university has tested 126 athletes for the virus.

5. It is indeed a seller's market in the Bay Area. Single-family homes sales surged by 70 percent over the previous month, the San Francisco Chronicle reports. The increase is nearly 8 percent behind the pace set a year ago. Meanwhile, the median home price is now $1 million. $$

6. The A's may utilize recordings of the beloved rightfield drum squad to liven up the fan-less Coliseum, the San Francisco Chronicle reports. And with long-time PA announcer Dick Callahan taking a break this season, there is talk of using recordings of Tom Hanks to announce the players. Opening night is July 24, sports fans. $$