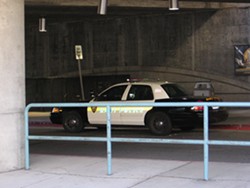 1. A BART police officer fatally shot a man on Wednesday afternoon near the West Oakland BART station, and another man was injured, the San Francisco Chronicle reports. It’s not clear whether the second man was shot by the BART officer or by the man who was killed. Oakland police, who are investigating the shooting, said they found a gun at the scene that did not belong to the BART cop.

2. A 4.4 earthquake centered near the Claremont Hotel rattled Berkeley and Oakland early this morning but did not appear to cause any major damage or injuries, the Chronicle reports. The quake, which struck at 2:39 a.m., caused minor delays on BART and was felt by residents throughout the Bay Area.

3. U.S. Attorney General Jeff Sessions plans to allow federal prosecutions of cannabis cases in California and other states where marijuana is legal, reversing an Obama-era rule that took a hands-off approach to pot, the Associated Press reports (via SFGate). Sessions, who has said that he thinks pot is as dangerous as heroin (it’s not), is expected to allow local U.S. attorneys decide whether they will crack down on marijuana in states where it’s legal — a move that is expected to create confusion in California and elsewhere.

4. Thomas Homan, President Trump’s acting director of U.S. Immigration and Customs Enforcement (ICE), said on Fox News that mayors and councilmembers of cities that have enacted sanctuary city laws to protect undocumented immigrants should be arrested and charged with crimes, the Sacramento Bee$ reports. Sanctuary cities in the East Bay include Oakland, Berkeley, Alameda, San Leandro, and Richmond.

5. State Sen. Scott Wiener, D-San Francisco, has introduced legislation that would curb restrictions on the construction of housing near major transit hubs in an effort to relieve California’s severe housing shortage, reports Liam Dillon of the LA Times$. If enacted, the new state law would overturn strict zoning laws in cities like Oakland and Berkeley that limit housing near BART stations and other transit corridors.

6. State Sen. Tony Mendoza, D-Artesia, has taken a leave of absence from the legislature amid allegations of sexual harassment by three women, the Sacramento Bee$ reports. Mendoza, a former roommate of Senate President Pro Tem Kevin de Leòn, D-Los Angeles, had originally refused to go on leave during the investigation of his conduct.

7. And the state of Washington has sued Motel 6, alleging that the national chain has shared guest information with ICE and aided federal anti-immigration efforts, BuzzFeed News reports. Motel 6 has two locations in Oakland.