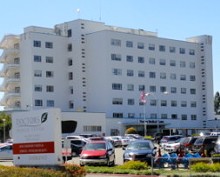 1. The Richmond City Council voted unanimously to give the financially troubled Doctor’s Medical Center $15 million in funds that the city is to receive from Chevron, Patch reports. The cash infusion will come out of the $90 million that Chevron has agreed to pay the city in exchange for the approval of the oil giant’s refinery overhaul in Richmond. However, the $15 million may not save Doctor’s hospital over the long term, because the facility is facing an $18 million annual deficit.

3. Emails released this week reveal that Michael Peevey, president of California Public Utilities Commission, hosted a small dinner party in 2010 at his exclusive home on the Sonoma County coast for a PG&E executive at the heart of the recent judge-shopping scandal, the LA Times$ reports. After the dinner, the executive, Brian Cherry, wrote a detailed memo, contending that Peevey had sought donations from PG&E to a ballot measure campaign in return for favorable treatment from state regulators.

4. A top transportation official said the water that got trapped inside the new Bay Bridge tower and soaked giant steel rods came from rainfall, although exactly when it happened remains unclear, the Chron reports. There is concern that the water may have corroded the rods.

5. And railroad companies have sued the State of California, arguing that new state regulations that require them to finance the cleanup of crude oil spills from train accidents violates federal law, the SacBee$ reports. The railroad companies contend that only the federal government can enact such rules.