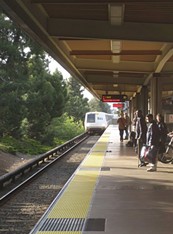 1. Electrical woes caused a commute nightmare yesterday on BART, and the transit system continued to suffer outages during this morning’s commute, the Chron reports. A mysterious power surge between the Pittsburg/Bay Point and North Concord stations knocked about fifty train cars out of service, causing systemwide delays. This is the second time in a month that the agency has been rocked by power surges. BART is unsure as to what’s causing the problems. This morning, the agency had to use buses to ferry passengers between Pittsburg/Bay Point and North Concord.

2. The plastics industry and its allies have pumped $5 million into a statewide ballot measure campaign to block California’s ban on plastic bags from ever going into effect, the SacBee$ reports. The ban was supposed to begin on July 1 of this year, but the plastic bag industry successfully delayed the start date until at least the November election.

3. Big Pharma, meanwhile, has dumped a whopping $49 million into a campaign against a statewide measure that seeks to cap prescription drug prices in California, KQED reports, citing a new analysis by the Berkeley-based political watchdog group Maplight.org (h/t Rough & Tumble). The ballot measure would limit how much California would pay for prescription drugs for Medi-Cal enrollees, state prisoners, and others.

5. An Alameda County Superior Court judge has tentatively ruled that the Hayward Police Department grossly overcharged the National Lawyers Guild (NLG) for police body-camera footage, the Bay Area News Group$ reports. "The court finds that Hayward's decision to charge the NLG $3,247.47 for the cost of reviewing and redacting the public records at issue is not supported by law," Judge Evelio Grillo wrote.

6. And Ohio Governor John Kasich’s win this week in the GOP Ohio primary likely means that the California primary in June will be pivotal in deciding whether frontrunner Donald Trump becomes the Republican presidential nominee, the LA Times$ reports.