From the synthetic bleeps and blurps of The Eraser, the Radiohead frontman and company forge an organic rock sound.

Thom Yorke's solo album The Eraser completed the abandonment of rock instrumentation that began on the Radiohead album Kid A. Most of the album's nine songs sounded synthetic in nature, and the liner notes refer to just one real instrument of any kind — the "piano chords" Yorke's Radiohead bandmate Jonny Greenwood provided on the title track. For mainstream fans worried about Yorke's continuing dedication to the guitar-based sound that characterized early Radiohead, The Eraser seemed to confirm that Yorke was moving in an electronic direction.

What then explains the wholly natural sound of Yorke's new band, Atoms for Peace, which played two dates at the Fox Theater last week? The common assumption was that it would be a spare, synthesizer-dependent serving of bleeps and blurps, or else a bloated supergroup side project, what with its celebrity lineup of Radiohead producer Nigel Godrich, bass player Flea from the Red Hot Chili Peppers, Beck drummer Joey Waronker, and Forro in the Dark percussionist Mauro Refosco. Neither fear was warranted. Nor indeed was this newspaper's entirely reasonable assumption that the show belonged in the DJ & Dance listings. 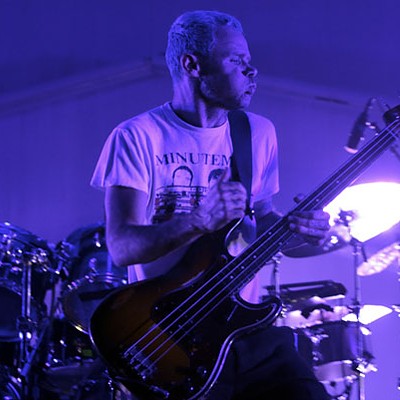 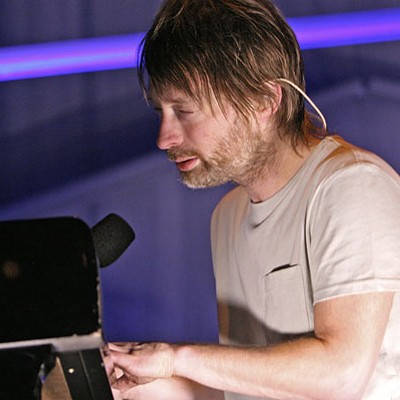 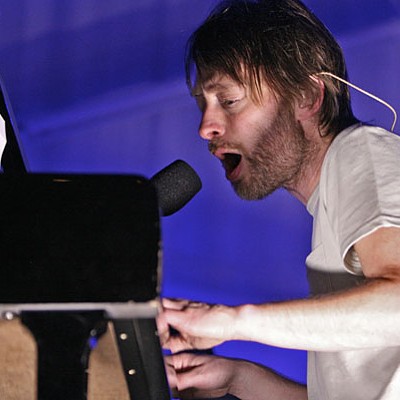 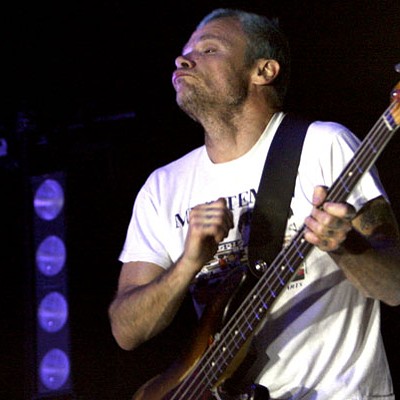 Thursday night's concert might as well have been a seminar on the lifecycle of a Thom Yorke song. The band played the entirety of The Eraser from start to finish during the first half of the show. And while the album itself is stark and minimal, I wouldn't have described it as unfinished until hearing Atoms for Peace put flesh on the nine songs' bones.

The instrumentation couldn't have been much more organic. Yorke played a resonant upright piano, acoustic and electric guitars, and even a cowbell. Waronker and Refosco added acoustic depth to songs previously characterized by the hollow tones of electronic drums, with the latter at times playing what appeared to be a Brazilian berimbau and a strange hand-powered device that resembled six tom-toms arrayed on a coat rack. Flea prowled the stage like a predator and played with ferocious control, (although a young woman in the audience next to me complained that he didn't "get to do shit," which was true by the blue-haired bass player's usual standards). Even Godrich, the master knob twiddler, picked up a guitar and contributed mightily to the sense that this was a real rock band and not just some guys thrown together for a nine-date romp across the United States.

After leaving the stage briefly following the completion of The Eraser, Yorke returned by himself to play a handful of promising new songs on solo piano or acoustic guitar. They were clearly works in progress — so much so that Godrich had to remind him of the lyrics to the first one. Yorke quipped "I'm dying out here," but in fact he seemed to be having a fabulous time all night. He was loose-limbed and energetic, and bore almost no relationship to the stiff front man of OK Computer-era Radiohead. And when the entire band returned and Flea finally got his chance to step out, Atoms for Peace debuted a guitar-based song that raged as thoroughly as Led Zeppelin's "The Immigrant Song" or Radiohead's Kid A masterpiece, "The National Anthem."

If there is one constant in music today it is that everyone stops clapping once the house lights go up. But Thursday night's audience liked Atoms for Peace so much that it called the band back to the stage even after five minutes of house lights and piped-in music. The seemingly grateful band and its kinetic leader returned to play a pitch-perfect rendition of Joy Division's "Love Will Tear Us Apart."

Overall, its triumphant performance suggested that the synthetic sounds of The Eraser were just steps along the way to something much greater.