April 29, 2016
comment
Thanks to Queen Bey, this week has been blessed. Finish it off right. 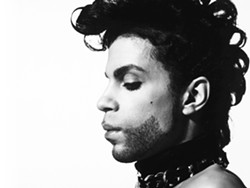 A Celebration of Prince
Dearly beloved / We are gathered here today to get through this thing called life, preaches Prince in the sermon-like intro of “Let’s Go Crazy.” In retrospect, much of Prince’s music was hauntingly prophetic, with lyrics about mortality dazzlingly cloaked as celebratory pop. The iconic musician’s untimely death at the age of 57 shocked fans across the world last week. Prince played by his own rules. In addition to being a musical genius, he defied gender norms and proudly displayed his love for the Black community. He was a generous humanitarian that donated to a variety of social justice and environmental causes. He used pop to spur social change, and his work touched several generations. There are many ways to grieve, but one is to celebrate his life at Mezzanine on April 30, with DJ Apollo and D Sharp spinning Prince jams all night. The party is free, but there will be opportunities to donate to three causes Prince supported: The Elton John AIDS Foundation, Sheila E’s Elevate Hope Foundation, and Music for Minors: Music Education for Bay Area Youth.— Nastia Voynovskaya
Sat., April 30, 9 p.m. Free. MezzanineSF.com

Yellow No. 5, Bruh: A Solo exhibition by Eli Thorne
Oakland artist Eli Thorne’s 2014 Mills College MFA thesis installation looked like a parody of an Olympian gymnastics gym. Bars crisscrossed each other to form a tower mounting a net filled with yellow tennis balls. Heavy, concrete balls hung from thick blue ropes attached to a wall with a metal bar. And royal blue flags dangled from the ceiling. The installation pinpointed an amusing aesthetic that registered immediately as athletic, yet didn’t actually mimic any existing athletic gear. Now, for a solo show at Royal NoneSuch Gallery (4231 Telegraph Ave.) entitled Yellow No. 5, Bruh, Thorne is going in on normative notions of masculinity with the same style of parody and a similar focus on sports culture. For the show, Thorne will be entirely transforming the space into a hyperbolic metaphor for male-ness made up of materials associated with home gyms, jocks, caffeine and male entitlement. Yellow No. 5, Bruh opens on Friday, April 29, with a reception from 7–10 p.m.— Sarah Burke
April 29-May 28. free. RoyalNoneSuchGallery.com

Independent Bookstore Day
On Saturday, April 30, Independent Bookstore Day will once again be taking over local bookshops. To celebrate, bookstores will be hosting a grab-bag of literary festivities. Diesel Bookstore (5433 College Ave.) will release Record Store Day-style, limited-edition products. Among the rare literary goods will be X is For…, a new record featuring Carolyn Pennypacker-Riggs made as an accompaniment to local author Kate Schatz’s best-selling children’s book Rad American Women A-Z. Meanwhile, Schatz will appear in person at Books Inc. Alameda (1344 Park St.) to promote the record. And at Books Inc. Berkeley (1491 Shattuck Ave.), there will be a photo booth, with costumes for dressing up as your favorite literary character (think Harry Potter robes). Pegasus Books Downtown (2349 Shattuck Ave., Berkeley) will take part as well, offering an ask-me-anything session with author Mary Roach, who is currently working on a new book, titled Grunt: The Curious Science of Humans at War.— Sarah Burke
Sat., April 30. Free. IndieBookStoreDay.com

Local Connection Pop-Up
As much as the Bay Area is rightly celebrated for its vibrant farm-to-table food culture, life as a farmer in Northern California is difficult — all the more so, if you’re a young, small-scale farmer just starting out in the profession who has yet to establish a prominent presence at the most prestigious farmers’ markets or the trendiest restaurants. The Local Connection Pop-Up is designed to help bridge that gap. Held at Swan’s Market (510 9th St., Oakland) on May 1, the $40 prix-fixe, buffet-style dinner will use meat and produce supplied by four farms run by young, new-to-the-profession farmers — Hikari Farm in Watsonville, Sol Seeker Farm in Tres Pinos, and Jellicles Farm and Baia Nicchia in Sunol. The farmers will be on hand to answer questions, and, in keeping with the theme, the chefs cooking the meal will be a team of young, up-and-coming sous chefs and line cooks from prominent East Bay restaurants such as Ramen Shop and AS B-Dama. Tickets are available via Eventbrite.com. — Luke Tsai
Sun., May 1, 5-8 p.m. $40

To Kill A Mockingbird
To Kill a Mockingbird For more than sixty years, Harper Lee’s To Kill a Mockingbird has compelled audiences with its astute portrayal of racism and injustice in Depression-era Alabama. In 1970, ten years after the novel was published, playwright Christopher Sergel began working on a stage adaptation that took him twenty years to complete. Sergel’s adaptation is now headed to Berkeley Playhouse, with previews beginning April 28 at the Julia Morgan Theater (2640 College Ave., Berkeley). The play is the first-ever non-musical produced by Berkeley Playhouse, which has focused exclusively on musical productions in the nine years since its founding, and will be directed by Berkeley Playhouse’s producing artistic director, Darren A.C. Carollo. Two sets of young actors ranging in age from nine to fourteen will take on the roles of protagonist Scout Finch, her brother Jem, and their friend Dill Harris, while Steve Rhyne will play Scout and Jem’s father Atticus, a lawyer much-beloved by audiences whom Lee modeled after her own father.— Sarah Elizabeth Adler
Through May 22. $17-$60. BerkeleyPlayhouse.org