Oakland Lost Landscapes
Historian and media activist Rick Prelinger’s popular Lost Landscapes series will be coming to The New Parkway (474 24th St.) for a free presentation of Oakland-specific material on Friday, April 1 as part of First Friday Shorts. Oakland Lost Landscapes is a montage of rediscovered and rarely-seen film clips taken by news cameramen, amateur videographers, and industrial filmmakers at times when the city looked very different than it does today. Although Prelinger — whose archive of 60,000 such films from across the country now lives at the Library of Congress — researched and compiled the Oakland Lost Landscapes collection, his student Alex Cruse will be giving the presentation on Friday. Cruse is an Oakland-based writer, interdisciplinary artist, and educator who worked at the Prelinger Archives between 2012 and 2013 and is now the primary producer of the Lost Landscapes series. Unlike most screenings, talking is encouraged during Lost Landscape presentations. “We should think about not just making films, but making events as well,” Prelinger told the Express in 2014. “I want to use historical film material as an opportunity to get people talking about issues that might be hard to talk about.”— Sarah Burke
Fri., April 1, 6-8 p.m. Free. TheNewParkway.com

Seed Language: A New Identity
Early on in Seed Language: A New Identity, a young woman playing Alicia Garza, co-founder of Black Lives Matter, recites the names of women who have been killed by the police. Four dancers hang from the rafters on wires above her, evoking bodies hung from trees. As she says the names, the hanging dancers flip, alternating between hanging feetfirst and headfirst. Other dancers walk slowly around the stage, some collapsing to the ground as more names ring out. It's one of several startlingly powerful moments in a show where words and movement frequently combine to create a greater whole. It's also not the only time the production, which opened at Laney College's Odell Johnson Theater last weekend, delves into death and loss. — April Kilcrease Reead the full story here.
Seed Language: A New Identity will show at Odell Johnson Theater (900 Fallon St., Oakland) through April 3 and at The Geary Theater (415 Geary St., San Francisco) on April 16. $10-$30. DestinyArts.org 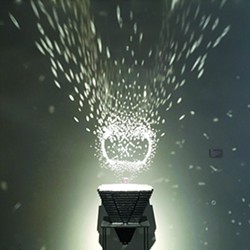 Nick Dong: Cosmic Dance
The concept behind Nick Dong’s current show at Mercury 20 Gallery (475 25th St.), Cosmic Dance, came to the artist during a session of meditation. With the show, Dong aims to offer a collection of “unexplainable objects” that inhabit an ambiguous space between perception and reality. Indeed, the series of installations is both dazzling and bewildering. In “Ghost of Graviton,” what looks like a metallic talisman in the shape of a rounded cone levitates atop a whimsical wall-hanging pedestal and spins slowly in midair, projecting swirling light onto the gallery’s black walls. In “Force of Gravity,” a metallic cube rotates in the center of a mirrored, concave platform atop an upside-down pyramid inserted into a table. Hovering above the arrangement with no clear source, spots of light form a midair sculpture that slowly moves, as if breathing. There will be a closing reception for Dong’s show during First Friday on April 1 from 6–9 p.m. If you haven’t experienced the exhibit already, make sure not to miss it.
— S. B.
Through April 2. MercuryTwenty.com

Club Chai x Discwoman
Discwoman is a music collective and online platform that started in New York with DJs Frankie Hutchinson, Emma Burgess-Olson, and Christine Tran, who came together to find a way to create spaces for female and gender nonconforming DJs and producers. Since its inception, the organization has thrown parties in over fifteen cultural hubs such as Los Angeles, Mexico City, and Toronto, and worked with over 150 emerging artists. Now, Discwoman is collaborating with Bay Area DJs and party throwers 8ulentina and Foozool, who started the genre-defying monthly dance party Club Chai earlier this year. At the Club Chai x Discwoman party at Alena Studios on April 2, residents Foozool and 8ulentina will be behind the decks alongside local DJs Namaste Shawty, Jasmine Infiniti, and Discwoman co-founder Hutchinson, who performs as Bearcat.
— Nastia Voynovskaya
Sat., April 2, 9 p.m. $10. Discwoman.com 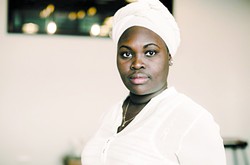 "An evening in Havana" with Dayme Arocena
As America’s relations with Cuba grow friendlier, whispers of which emerging Cuban artists we should be following are already hitting stateside music blogs. While many people are familiar with Afro-Cuban jazz and pop legends like Celia Cruz, we can hopefully look forward to a larger presence of younger, fresher Cuban cultural icons in the years to come. One Cuban artist making waves right now is Daymé Arocena, a 22-year-old singer from Havana with an idiosyncratic, deep, resonant voice. Her jazz and neo-soul stylings evoke traditional Afro-Cuban folk music, dub, jazz, and pop singer-songwriters such as Sade. Arocena is a devotee of Santaria, a Caribbean religion with roots in Nigeria’s Yoruba faith, a spiritual practice that prominently features female deities. Her music often invokes her spiritual beliefs and heritage in novel ways, with elaborate, layered harmonies, breezy instrumentation with island vibes, and occasional electronic elements adding new layers to the traditions she references. Catch her in Oakland at The New Parish on Sunday.
— N. V.
Sun., April 3, 3 p.m. $15, $20. TheNewParish.com