July 31, 2015
comment
Art + Soul will be taking over the Town this weekend, with music and dancing all over Downtown Oakland. But if you're looking for other activities to fill in your time in-between dance competitions, like last year's YAK to the Bay championship battle seen in the video below, continue on for our recommendations.

Mykki Blanco
As soon as fans, journalists, and industry gatekeepers think they know what to call him, Mykki Blanco slithers out from under every label — both as a musician and public figure. The New York MC (who is originally from the South Bay) first gained renown for his 2012 YouTube video diary, in which he brazenly spat bars while dressed in drag to the astonishment of neighborhood high school kids. Blanco’s androgynous presentation and punk-infused hip-hop earned him a following among the politically radical Tumblr set as well as in the art world. But he has always outspokenly challenged his fans’ assumptions, and has made it clear that he’s no one’s queer rap poster boy or token queer person of color at your ultra-white, ultra-hip Art Basel Miami party. After dropping his phenomenally gritty mixtape Gay Dog Food late last year, Blanco made two major announcements: He came out as HIV-positive and said that he wants to retire from rap to travel the world and write about LGBTQ issues. Fortunately for fans of his music, the latter doesn’t seem to have happened yet, as he performs at the Mezzanine, on July 31.— Nastia Voynovskaya
Fri., July 31, 9 p.m. $15, $25. MezzanineSF.com 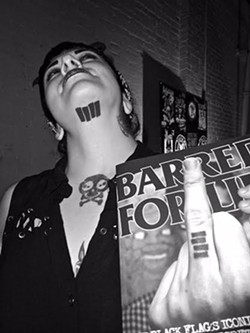 Barred for Life
To several generations of fans around the world, legendary punk band Black Flag’s four-bar logo is a potent symbol of rebellion against cultural norms. A diehard devotee himself, photographer and author Stewart Ebersole traveled around North America and Europe in 2009 to shoot portraits of the band’s most loyal followers: those who have had the Black Flag logo permanently inked onto their skin. In his book, Barred For Life: How Black Flag’s Iconic Logo Became Punk Rock’s Secret Handshake, Ebersole pairs portraits of tattooed punks, young and old (including former Black Flag band members themselves), with interviews about their experiences in the scene. With interviewees from a wide range of age groups and cultural backgrounds, the book offers insight into how punk grew from a demonized, radical lifestyle to a widespread form of self-expression for disaffected youth. On August 1, Ebersole will present Barred for Life at 1-2-3-4 Go! Records and show some of his original photography.— Nastia Voynovskaya
Sat., Aug. 1, 7-10 p.m. Free. Facebook.com/1234GoRecords

TV Club with Brynda Glazier and Courtney Johnson
For their current joint show at Royal Nonesuch gallery, entitled Tapping the Mirror, artists Brynda Glazier and Courtney Johnson have decided to nix the traditional artist talk and host an “episode” of TV Club instead, to take place on August 1. TV Club is a monthly series at the gallery and features amateur experts giving a talk on a television show of their choice. Glazier and Johnson have chosen to discuss the psychedelic British sitcom Luxury Comedy and the notoriously absurd and disgusting Nineties cartoon The Ren & Stimpy Show. It will likely be an interesting conversation, considering that Tapping the Mirror is surreal in its own right, and involves a cinematic collage of clips sourced from a range of celebrated and obscure pieces of pop culture. These artists obviously know their cult classics. The talk will be followed by a screening of one twenty-minute episode of each television show that will shine new light on Glazier and Johnson’s artwork.— Sarah Burke
Sat., Aug. 1, 7-10 p.m. Free. RoyalNoneSuchGallery.com

Biergarten Fest
Nestled in the Oakland Hills, Oakland Nature Friends is a club that celebrates the quaintest and most picturesque aspects of German culture: the hiking and skiing, the alpine music, the lederhosen, and, of course, the large quantities of food and beer. At this Sunday’s annual Biergarten festival, the club’s Schuhplattler dancers will be on hand to strut their stuff, and guests will have a chance to sample a variety of traditional dishes: spätzle, schweinebraten (pork roast), sauerkraut, potato salad, pretzels, and a few different kinds of sausages. Strap on your lederhosen (or dirndl, if you prefer), and come with a big appetite. Tickets can be purchased in advance via the Nature Friends website, but food and drink will be sold on an a la carte basis, so make sure you bring some cash.— Luke Tsai
Sun., Aug. 2, 12-5 p.m. $10. TheNatureFriendsCorporation.org

Dance of the Holy Ghosts: A Play on Memory
The Ubuntu Theater version of Dance of the Holy Ghosts, a play by acclaimed Oakland native Marcus Gardley, takes place in the sanctuary space at the Oakland City Church (2735 MacArthur Blvd., Oakland). The play follows a young man named Marcus as he attends the memorial service for his grandfather, Oscar, who was never there for him. The story of their tumultuous relationship is revealed through a collection of dreamy memories, with poetic dialogue and support from an involved gospel choir. The production is the first play in Ubuntu’s annual summer theater festival, Breaking Chains, which takes place at venues across Oakland through September 13. The other plays include Tarell Alvin McCraney’s The Brothers Size, George Brant’s Grounded, Tony Kushner’s Angels in America, and Clifford Odets’ Waiting for Lefty. Dance of the Holy Ghosts will be performed through August 2.— Sarah Burke
Through Aug. 2. $15-$35. UbuntuTheaterProject.com