July 24, 2015
comment
If you didn't already get enough recommendations from this week's Best of the East Bay issue, here are five ways to have the Best Weekend in the East Bay.

Das Racist made the “Combination Pizza Hut & Taco Bell” a symbol of American consumerism, and then the rap group’s own joint identity split. In corporate parlance, Das Racist spun off its properties, with Kool A.D. returning to the East Bay and Heems settling in his native New York. We’ve eagerly covered Kool A.D.’s mighty spate of mixtapes and horoscopes, and the whole of the music journalism community chimed in about Eat Pray Thug, Heems’ 2015 full-length. For Heems — who plays on Friday at the New Parish — Eat Pray Thug was a long-awaited statement. Like his twittered missives and essays, it’s rife with analysis of Middle Eastern and South Asian communities’ experience in America. The opening song, “The Patriot Act,” mentions harassment and profiling in the wake of 9/11 and surveillance: They vision is PRISM. It’s an urgent and direct record, but the latter line — which riffs on the NSA data collecting program and the Pentagon’s geometry — is reminiscent of how Heems and Kool A.D. inflated snappy lines with outsized meaning together, before the combo divested its assets.— Sam Lefebvre
Fri., July 24, 9 p.m. $15, $20. TheNewParish.com

Pedalfest is riding into town once again this weekend. The annual celebration of all things bike-related will take place at Jack London Square on July 25, 11 a.m.–7 p.m. This year, the popular Whiskeydrome stunt show will be back, featuring cycling daredevils performing stunts on a 30-foot wooden velodrome. Professional bike stunt riders Ryan Leach and Casey Holm will also be performing, showing off balancing and agility tricks on an obstacle course. For kids, there will be a popup bike park at which children of all ages can prove what they know, or learn something new from El Cerrito High School bike skills team coach Gary Hill. There will even be a scavenger hunt in which contestants will follow clues that lead them to public landmarks, where they snap photos to gather points. The two-wheeled event offerings are aplenty. Plus, there will be a Beer Garden presented by New Belgium Brewing from which all proceeds will go to the local nonprofit Bike East Bay. A full day of music will accompany the festivities, including acts with names like “Cello Joe” and “Planet Booty.”— Sarah Burke
Sat., July 25, 11 a.m.-7 p.m. Free. PedalFestJackLondon.com

Pig Heart Transplant
As one half of the long-running and rather adventurous hardcore duo Iron Lung, Jon Kortland is accustomed to approaching oppressive, mean-spirited music with great care. Tempos like that require precision, lest the music risk incoherence. The same exacting ferocity informs Kortland’s work as Pig Heart Transplant, only the instrumental palette skews industrial and the tempos more often assume a martial pace, as opposed to Iron Lung’s guitar, noise, and drums configuration. On last year’s For Mass Consumption, Kortland might have arrived at Pig Heart Transplant’s apex. The specs sound surgical: Twenty-seven tracks, each clocking in at 44 seconds and bearing a four-letter word for a song title. Misanthropy is the spiritual core here, not unlike the sort of uncompromising doom peddled by The Body, but there’s an appealingly rigorous methodology to all the bad vibes. Pig Heart Transplant performs on Saturday at the Night Light.— S. L.
Sat., July 25, 9 p.m. $8. TheNightLightOakland.com 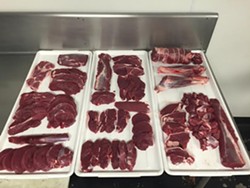 Deer Butchery Class
One of the surprising things about the Bay Area is the number of hunters there are — though perhaps that shouldn’t be so surprising, given the Slow Food movement’s interest in utilizing whole animals, coming to a deeper understanding of where food comes from, and “following the meat that you eat back to its true source,” as Bill McCann, a butcher at Berkeley’s Local Butcher Shop — and an experienced hunter himself — put it. On Monday, McCann, Aaron Rocchino (co-owner of the butcher shop), and Scott Chase (of Chase’s Chop Shop in Madera, California) will lead a class at Local Butcher Shop’s Emeryville production kitchen at 1327 61st Street that should be of interest to any avid or aspiring hunter: Participants will learn how to skin a young deer and break down its carcass so that it can be stored in a home freezer. As a bonus, everyone brings home a portion of venison.— Luke Tsai
Sun., July 26, 4-7 p.m. $145. TheLocalButcherShop.com

Kehlani
“Wanted,” a highlight from Kehlani’s 2015 full-length, You Should Be Here, is an ebullient, glitzy platter of soul. Underpinned by punchy production, Kehlani’s refrain is staggeringly virtuosic and arresting. The singer attended Oakland Tech and appeared on America’s Got Talent with the teen group PopLyfe before striking out on her own, garnering attention for her ace 2014 mixtape, Cloud 19. The highlight there was “FWU,” on which each of Kehlani’s lines spill seamlessly into the next as she professes the joys of monogamy and loyalty. If you take issue with that sort of domesticity and how it plays into the hands of chauvinistic R&B dudes, note that Kehlani has made talking points of her bisexuality and venom for dodgy industry types — all before her twentieth birthday. At any rate, the chief appeal of Kehlani’s appearances on Sunday and Monday at Slim’s will be her catalog, the way songs such as “Wanted” brim with the ambition indicated by Kehlani’s album title: You Should Be Here.— S. L.
Sun., July 26, 7 p.m. and Mon., July 27, 7 p.m. sold out. SlimsPresents.com