July 17, 2015
comment
Welcome to the weekend! Please choose one or more options presented below, follow directions, and enjoy.

The Coup
Musicians invoke radical politics all of the time, as lyrical fodder, sartorial advice, and general aesthetic direction. Who can blame them? Observe the Red Army Faction’s indelible iconography, the black bloc’s sleek garb, Pussy Riot’s very pop neon balaclavas — all highly chic. And yet, musicians such as The Coup’s Boots Riley couple radical posturing with activism’s less sexy elements, such as conferences and panels and the tedious parts of political organizing that The Clash didn’t sing about. To wit, Riley’s upcoming book, Tell Homeland Security — We Are the Bomb, brings his lyrics — the slang-riddled calls-to-arms, political takedowns, and social parables — together with cool and collected analysis. On Friday at the New Parish (579 18th St., Oakland), The Coup is set to merge swagger and righteous indignation with enough style to keep the revolution fashionable.— Sam Lefebvre
Fri., July 17, 9 p.m. $20, $25. TheNewParish.com

Cam'ron
Harlem rapper and de facto Dipset leader, Cam'ron issued a nearly unparalleled run of albums between 2000–2004. His second solo album, S.D.E. (Sports, Drugs, and Entertainments), opens with one of the most memorable minute-long dis streaks around, capped by Killa Cam bickering with a couple of women — a good indicator of the unrepentant pugnacity throughout. Come Home with Me, which appeared two years later, stormed the singles chart with sparkly narratives of sexual conquest and city block dominance in “Hey Ma” and “Oh Boy,” while the Jay-Z-featuring cut “Welcome to New York City” balanced Cam’ron’s newfound pop proficiency with boisterous regionalism. But Cam’ron’s legacy solidified with his next record, Purple Haze, for which the MC perhaps unwittingly appealed to nascent internet audiences by doing up his loud and flamboyant imagery and outfits. Purple Haze 2, slated for release sometime this year, is said to be Cam’ron’s swan song, making his 1015 Folsom (1015 Folsom St., San Francisco) appearance a potential farewell.— S. L.
Fri., July 17, 10 p.m. $20-$95. 1015.com

Beyond Dreams
In a multicultural place like the East Bay, immigrant experiences are extremely varied and don’t necessarily fall in line with the clichéd narrative of chasing the American dream. For its Immigrant Dreams series, La Peña Cultural Center (3105 Shattuck Ave., Berkeley) gives the floor to artists of diverse backgrounds who use hip-hop, poetry, and performance art to address their personal experiences and uplift their communities. The latest installment in the event series is Beyond Dreams, a speaker panel and performance showcase hosted by Davey D, an Oakland radio personality, journalist, and hip-hop scholar who has been an active supporter of the genre since the late Seventies. The participating artists include Aisha Fukushima, a musician who travels internationally with her RAPtivism project; Rebel Diaz, a bilingual hip-hop duo that made their debut at an immigrant rights march in New York City; Paul Flores, a poet, playwright, and co-founder of spoken word organization Youth Speaks; and Jasiri X a rapper, educator, and speaker.— Nastia Voynovskaya
Sat., July 18, 7 p.m. $15, $20. LaPena.org 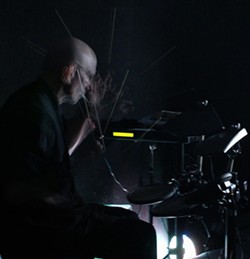 Percussionist, performance artist, and progenitor of industrial culture, Z’EV segued from fine art into the nascent punk scene of the Seventies and left indelible marks. Formally trained in multicultural musical traditions, Z’EV took to wielding found objects as percussion as he shared bills with outlying bands of the era, such as Factrix and The Screamers. Fixtures of industrial culture in Europe, including Einsturzende Neubaten, along with Survival Research Laboratories in San Francisco and the movement’s journal, Research, emerged in tandem with or under the spell of Z’EV’s thought and practice. In more recent years, Z’EV developed “Cine-cussion,” a technique in which illuminated and projected pools of liquid respond directly to percussive vibrations in the interest of contemplating the physical manifestation of sound. At The Lab (2948 16th St., San Francisco) on Saturday, Z’EV intends to interpolate footage taken of his so-called “wild-style” performances from 1984 as a tribute to the city in which they gestated.— S. L.
Sat., July 18, 8:30 p.m. $10, $15. TheLab.org

Sunday Suppers at Penrose
The second season of Charlie Hallowell’s bi-monthly philanthropic Sunday Suppers series kicks off with a dinner at the prolific Oakland restaurateur’s newest restaurant, Penrose (3311 Grand Ave.), with its bright and boldly spiced, North African-inflected California cuisine. Instead of the pre-ticketed, prix-fixe format from the first year of Sunday Suppers, this week’s dinner will be similar to any other night out at Penrose: Customers can make a reservation for the time of their choice (instead of picking between two designated seatings) and order whatever they want off the restaurant’s regular menu. What remains constant is the fact that all of the proceeds from that meal will go toward supporting a worthy local cause. This week’s beneficiary, Hack the Hood, an Oakland-based nonprofit that helps prepare low-income youth of color for careers in tech.— Luke Tsai
Sun., July 19, 5-10 p.m. $31-$50. SundaySuppersEastBay.com

Pretty Much Dead
San Francisco author Daphne Gottlieb has recently released a collection of short stories titled Pretty Much Dead, inspired by the tech takeover of the city. The stories peer into interstitial communities affected by the onslaught of unequal wealth, taking place in the streets and transient hotels as well as rent-controlled apartment buildings. Partially fictional and partially true, they highlight the larger significance of the little moments that break you down. Gottlieb has either authored or edited a total of ten books. She previously worked on Dear Dawn: Aileen Wuornos in Her Own Words, a collection of letters written by the famous female alleged serial killer while she was on Death Row. Gottlieb’s writing is dark, playful and punchy. On July 17, she will be holding the official book release for her newest work at Octopus Literary Salon (2101 Webster St., Oakland). Starting at 7 p.m, Gottlieb will read, along with guest readers Joel Landmine, Cindy Emch, and Kelly Klein.— Sarah Burke
Fri., July 17, 7 p.m. Free. OaklandOctopus.org