June 26, 2015
comment
With marriage equality now a nationwide reality, this weekend is one for celebration. But if you're not too busy partying at Pride in San Francisco,  here are our five other favorite events happening this weekend.

OG Maco
OG Maco — who plays at Venue (420 14th St., Oakland) on Friday — is one of the most notable young rappers to emerge from the current wave of left-field Atlanta emcees. But unlike his peers Migos or Young Thug, Maco’s approach to trap skews more toward punk than hip-hop. Whenever an OG Maco song comes on at a club, people don’t dance — they mosh. He first became known for his single “U Guessed It,” on which he crafted a catchy hook by emitting guttural yells and maniacal whoops over a sparse piano loop. His verses are animated to the point of chaos, with occasional interludes in a monotone drawl. Earlier this year, Maco appeared in XXL’s 2015 Freshman Class, a roundup of the country’s top up-and-coming rappers. While the MC previously said that his first hit was a fluke, he has been steadily releasing well-received, new material that has shown fans and critics that he’s more than a one-hit wonder.— Nastia Voynovskaya
Fri., June 26, 8 p.m. $20.

Obsidian Blade
For years, creatures in the orbit of shadowy, party-forward organizations such as Spaz and Katabatik beheld the inimitable live sets of Obsidian Blade, which intersected skittish mechanical throbs with the particular scree of a clamorous techno peddler from the noise camp. It was all courtesy of a fellow known as Joey Casio — though lore has it that the artist’s birth certificate was done in pencil, enabling a lifetime of reinvention — until Obsidian Blade seemed to disappear, its already minimal web presence petering out unceremoniously. All transmissions stopped. Industrial techno kids wandered from warehouse to warehouse, wondering why the void in their hearts had grown ever more deep and black, until Obsidian Blade announced its return — at least, just for one night at B4BEL4B Gallery (184 10th St., Oakland) on Friday.— Sam Lefebvre
Fri., June 26, 10 p.m. $10. b4bel4b.com

Stovetop Beer Brewing
Even as home brewing has become increasingly commonplace, most beer lovers probably still think of mall-scale beer production as the province of homeowners with access to gigantic basements or garages — and, more likely than not, several thousand dollars’ worth of specialized equipment. Hopefully, this Saturday’s workshop at Preserved (4200 Piedmont Ave. #2) will put those myths to rest, as participants learn everything they need to know in order to brew a one-gallon batch of all-grain beer right on their kitchen stovetop. Gilbert Guerrero, owner of Temescal Homebrewing, will lead this hands-on class, which, among its other virtues, will feature plenty of samples for tasting. This session will focus on IPAs, so students are encouraged to bring a favorite bottle of that style to share with the class — and everyone gets to take home some freshly bottled beer.— Luke Tsai
Sat., June 27, 10 a.m.-1 p.m. $40. 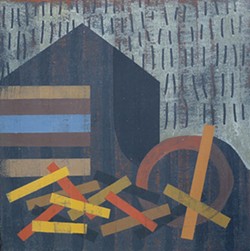 Many Streams
Last year, artist Martin Webb began walking around his neighborhood at night taking dimly lit photographs. He was intrigued by the way that landscapes once familiar to him seemed to transform in the darkness. Without people visibly inhabiting the houses, they began to take on new meaning. Then, he traveled to the Eastern Sierras to seek out abandoned mining towns. Those houses, also empty, were no longer distinct from the natural landscape that surrounded them, and instead were collapsing onto themselves and the landscape organically.
In his new body of work, currently on view at the Compound Gallery (1167 65th St., Oakland) in the show Many Streams, Webb has eliminated all figures from his paintings. Instead, he embarks on a study of houses, exploring the similarities and differences between wild and urban landscapes. Color blocking with a warm, limited pallet, Webb depicts house after house on square wooden panels that line the walls of the gallery. In doing so, he builds a small cluster of structures, each flattened to reveal its core geometric foundation, sometimes with piles of wooden planks sitting in the foreground like colorful ‘X’s drawn on the ground. The buildings are not foreboding yet do not welcome visitors. They simply stand alone.— Sarah Burke
Through July 12. Free.

Heavy Breathing
Last Thursday afternoon, a group of people stood in the lobby of the Yerba Buena Center for the Arts in San Francisco, throwing their arms into the air and then abruptly letting them fall while releasing a loud exhale. The artist Jeepneys, wearing a mic headset and a full body spandex suit painted with rainbow designs, stood in the center of the circle, directing the class to go faster and faster until the entire group was huffing for air.
The event — part interactive performance art, part group exercise — was an appropriate kick-off for Heavy Breathing, a summer series of critical theory seminars in the form of absurd fitness classes led by artists. The gathering also included a session of "laughter yoga" led by artist Raphael Noz and a workout called "Pumped Up for Nothing" in which performance artist Julz Hale Mary taught the crowd irreverent moves, including "blank face" and "pour yourself a drink." The kick-off sessions were light on the theoretical end, but as the series unfolds throughout the summer, facilitators will use similarly wacky approaches to tackle some challenging bodies of thought. — Sarah Burke (Read the full story here.)
The full schedule of classes can be found online at Facebook.com/HeavyHeavyBreathing. 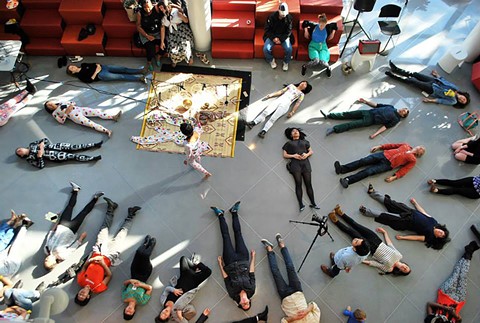