June 12, 2015
2 comments
It's the weekend and yet again Oaklanders are faced with the challenge of figuring out what to do with themselves between Warriors wins. But have no fear! We're here to help. These are our top recommendations for things to do this weekend:

The Chef and the Revolutionary
This week’s dinner for a worthy cause comes from the good people behind Acta Non Verba, a working farm in deep East Oakland where local youth plan, plant, harvest, and sell all of the produce — and have 100 percent of the proceeds from those sales placed into individual college savings accounts. It’s fitting, then, that the fundraising dinner at Kingston 11 (2270 Telegraph Ave.) would feature a couple of revolutionary guests: Former Black Panther Party chair Elaine Brown will lead a discussion on “food as revolution,” and Seattle-based TV chef Tarik Abdullah will cook a globally inspired five-course meal that will highlight some of the produce grown by the kids, as well as the flavors of North Africa (e.g., harissa-spiced Moroccan chicken) and the Caribbean (jerk-spiced lamb sliders). A separate vegan menu will be available. Tickets can be purchased via AVNFarmBenefit.— Luke Tsai
Sun., June 14, 6-10 p.m. $75.

Xuxa Santamaria
Though regional character perseveres in pockets, electronic music has embraced the aesthetic consequences of global connectivity: As in, it’s not uncommon for one album to feature transcontinental collaborations and influences drawn from styles once anchored in, say, Detroit, London, and Ibiza, Spain. Xuxa Santamaria, a local duo scheduled to perform at The Legionnaire Saloon (2272 Telegraph Ave., Oakland) on Sunday, dealt that sort of amorphous techno on its eponymous 2011 debut. With snappy melodic phrases sung in Spanish, Sofìa Cordòva’s lyrics grappled with colonialism and the Caribbean diaspora. On the group’s most recent release, Billionair Rainbow, “Conquistador” confronts a chief enabler of global connectivity: the internet. In the song’s music video, Cordòva plays a webcam girl looking alternately bored and perky on six separate screens, singing to the viewer about the politics of power and commerce in the digital age.— Sam Lefebvre
Fri., June 12, 9 p.m. $7. LegionnaireSaloon.com

HellaCon
The Bay Area has it’s own brand of online pop culture media: It’s at the intersection of its DIY ethos and innovative tech mentality. HellaCon, which takes place on June 13 and 14, aims to be the first festival to highlight that fact. The event will take place at the New Parkway Theater (474 24th St.,) and will include two days of talks, screenings, and performances from local content creators. Sarah Mirk, the online editor at Bitch Media and host of its “Propaganda” podcast, will present the keynote speech, titled “Five Bright Ideas in Feminist Media.” The fest will also include the TALKIES Comedy Show, a multimedia “kitchen sink” hour of humor featuring George Chen and other local comedians. Workshops will offer instructions on how to create a successful YouTube channel and how to make an independent animated short. Musical guests are interspersed throughout the schedule, including Baby Teeth, El Metate, and Conspiracy of Venus. The weekend will end with a “HellaShort Film Festival,” featuring a panel of guest judges. Take this opportunity to see your favorite local new media creators IRL — that’s internet speak for “in real life.”— Sarah Burke
Sat., June 13, 11:15 a.m.-11:15 p.m. and Sun., June 14, 11 a.m.-4 p.m. $25-$50. HellaCon.com 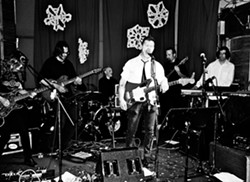 Surplus 1980
Moe! Staiano insists on that exclamation point. Drummers are expected to mind the beat and all, but Staiano — a collaboratively promiscuous avant-garde percussionist — took it a bit further and dictated emphasis in his own name as if it were a score in progress. That eccentric and punctilious bent colors his music, whether in improvisatory jazz ensembles, as a member of the mighty Mute Socialite, or as bandleader of Surplus 1980, a post-punk outfit for the music conservatory set. Arterial Ends Here, the group’s 2013 full-length, sets dissonant melodic phrases to frantic, technical grooves and oblique lyrical sentiments. It’s a jarring and disjointed listen, united mostly by its reluctance to respect the usual edicts of rock ’n’ roll. In that vein, Surplus 1980 is scheduled to appear not at a rock club per se, but at longstanding Irish pub the Starry Plough (3101 Shattuck Ave., Berkeley). Someone tell Staiano about Celtic accent marks.— Sam Lefebvre
Sat., June 13, 9 p.m. $8-$12

Will Brown: MATRIX 259
On June 12, a green light will emanate from 2626 Bancroft Way, the building that formerly housed the Berkeley Art Museum and Pacific Film Archive. The light, which will be caught in the air by floating fog, will be the last beacon of life to emerge from the building. The same green light will emanate from beneath a 1974 Toyota Corolla, parked outside the museum and filled with archival materials from throughout BAM/PFA's history, as if some kooky curator had been building a home inside of it. The green light will also illuminate the pages of a leather-bound book placed on a table in the Morrison Reading Room in UC Berkeley's Doe Library. The one-of-a kind tome will hold textual ephemera from the planning of a historic Dan Flavin installation at BAM/PFA called "untitled (for Gretchen, a colorful and fond match)" and a recent reconstruction of the piece for MATRIX 259 — made up of the aforementioned mysterious art installations — by the San Francisco art collective, Will Brown. (Read the full story here.)— S. B.
Opening reception on Friday, June 12 from 6-8 p.m. Exhibit runs through September 13.