Tiger Lily Sir Lord Von Raven will play at The Night Light on Saturday.
This week, the Internet told me that some science people claim the Big Crunch is closer than we think— because black matter. That's the end point of the universe slowly collapsing in on itself, which apparently is already happening. So, get up, get out, and enjoy the universe with one (or more!) of these five events that we recommend for you this weekend. Appreciate the world while you can. Apparently it's only going to be around for another ten billion years or so. 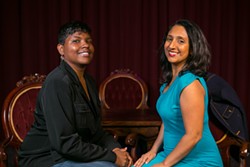 The Formula
Over the years, Aundré Herron, a San Francisco-based black comic, worked to carve out a niche for herself in an industry dominated by white men and plagued by sexist, racist, and otherwise offensive jokes. A lawyer who has advocated for death row inmates, Herron sees stand-up comedy as a uniquely effective platform to confront a wide range of serious topics, like homophobia within African-American churches, race relations in the United States, and other social justice issues. "The power of comedy is, at its core, based on truth," she said. While Herron has advanced her stand-up career over time, mainstream comedy is still very white and male — even in the Bay Area. A group of local comics have been working to change that, and now, they are looking to the East Bay as ground zero for alternative comedy. On Friday, Herron and six other female comics will perform at XOXO Nightclub (201 Broadway, Oakland) in Jack London Square, as part of a "socio-political" comedy night called The Formula, co-headlined by Bay Area comics Karinda Dobbins and Dhaya Lakshminarayanan. —Sam Levin (Read the full article here.)
8 p.m. on Friday, March 27. $10–$12. TheFormula.BrownpPaperTickets.com

Pecha Kucha Night: Women's Month Edition
A Pecha Kucha presentation goes like this: twenty slides for twenty seconds each. That’s it. Each person gets six minutes and forty seconds to share something about his or her personal practice, whether it be creative, political, entrepreneurial, or anything else. It’s like a TED Talk — except less preachy, faster, and more fun. Pecha Kucha Nights are made up of a series of these presentations, and they take place in more than 900 cities around the world. Here in Oakland, the seasonal events are hosted by cultural workers and entrepreneurs Ashara Ekundayo, Jeff Perlstein, and Mike Nicholls. In honor of International Women’s Month, they’ll be hosting an all-female edition on Saturday at Solespace shoe gallery. The presenters are described as “activists, architects, artists, chefs, curators, designers, dreamers, entrepreneurs, fabricators, fashionistas, historians, makers, rabble-rousers, and scientists.” They include Anyka Barber, Miranda Bergman, Melonie and Melorra Green, Navina Khanna, Ebony McKinney, Dr. Gail Myers, Kate Schatz, and Miriam Klein Stahl. On top of the talks, the event also includes music, drinks, and tamales by Tamales La Oaxaquena.— Sarah Burke
Sat., March 28, 7-10:20 p.m. $10. Buy tickets here.

POP Sandwich Pop-Up at Smart Bomb
Smart Bomb, a bi-monthly multimedia party held at Uptown Oakland’s Legionnaire Saloon, is celebrating its two-year anniversary with its usual mix of cassette tape DJs, live music acts (headlined by Oakland rappers Jay Stone and Queens D.Light), art, and tasty street food. Oh, and about the food: Fans of POP Sandwich — the recently departed (i.e. San Francisco-bound) back-of-a-convenience sandwich pop-up — will be happy to hear that chef Ian De Leoz will back in Oakland that night to peddle his brilliant banh mi-inspired creations — probably his pork adobo and spicy chicken sandwiches, De Leoz said. There’s a $5 cover for Smart Bomb, but the pop-up will be set up on the sidewalk outside (starting at around 8 p.m., an hour before the event officially kicks off), so both partygoers and passersby will be able to get their sandwich fix.— Luke Tsai
Sat., March 28, 8 p.m.-2 a.m. LegionnaireSaloon.com

Sir Lord Von Raven
The title track of The Age of Machines, the new album by local act Sir Lord Von Raven, is a sort of Luddite anthem, wherein vocalist Eric Johnson bleats, “I don’t want to be a part of the network!” His band’s rock ’n’ roll harks back to when Silicon Valley had a fertile counterculture. Heavily indebted to the Rolling Stones, with hand-claps, lumbering back-beats, and insistent, single-note piano parts, The Age of Machines features 22 tracks that run across — in the parlance of the pre-digital era Sir Lord Von Raven is inspired by — four sides of two long-playing vinyl records, probably in a gatefold sleeve. Maybe there’s an eight-by-ten-inch glossy band photo around, depicting the band members laden with scarves and charms, like the ones that record companies sent out before email changed the music industry forever. But The Age of Machines is available to stream for free, should you be moved to hear music before seeing the band at The Night Light on Saturday.— Sam Lefebvre
Sat., March 28, 8 p.m. $TBA. TheNightLightOakland.com\

This Is Real Life
Diedrick Brackens’ current show at Johansson Projects, entitled This Is Real Life, includes a piece called “10-79” — the police code to notify the coroner. It’s a long, woven tapestry with worn blue, green, and orange stripes running down it. There are white hand marks bleached onto the weaving, with fingers outstretched as if held in the air, or forced onto the sidewalk. The bleach is wiped across the tapestry like the remnants of a struggle. And deep red marks are woven into its stripes, dotting them like open wounds, with extra threads dangling like drops of blood. Brackens’ show features eleven of these woven artworks, which take aesthetic cues from European tapestry, West African weavings, and Southern quilts. Functioning somewhere between painting and sculpture, his weavings take up a technical language of their own that frees the medium from the boundaries of domesticity. Not all of the pieces are as political as “10-79.” Most are much more subtle, defying clear representation. In these, the colors and patterns speak loudest, appearing almost haphazardly, like accidental spilled dye. Brackens manages to imbue a sense of spontaneity in each textile that reimagines the work of a weaver.— S.B.
March 25-April 23. Free. JohanssonProjects.com