April 21, 2015
4 comments
On Monday April 20, the California Secretary of State reported that a third marijuana-related initiative, The Marijuana Control, Legalization and Revenue Act of 2016 had been filed by a group of seventeen people including a banned San Jose dispensary operator and a Northern California medical cannabis defense attorney. 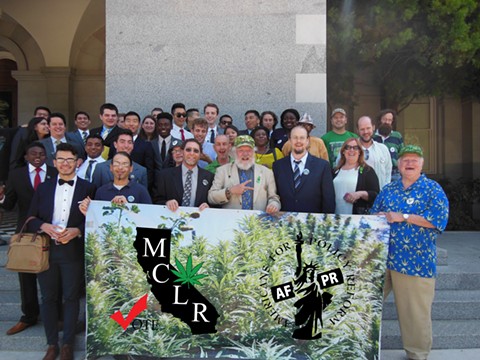 The ‘"The Marijuana Control, Legalization and Revenue Act of 2016" joins the "The Compassionate and Sensible Access Act" and the "The California Craft Cannabis Initiative” on the Secretary of State's list of active measures.

All it takes is $200 to file such a measure, and to date, none of the three groups have proven they have the $5million to $10 million needed to gather hundreds of thousands of signatures, then wage a muddy, protracted battle in the media through November 2016.

In related news, the founder of WeedMaps Justin Hartfield told me Friday that WeedMaps put $2 million into two committees to support California legalization in 2016.

“Basically we formed Californians for Sensible Reform as general ballot measure committee to support a mainstream, politically viable consensus measure in 2016. We’ve also formed a PAC to support like-minded political candidates in California and also across the country.”

The MCLR bills itself as the first open-source, consensus initiative. “We have worked hard to bring people together and create the best law possible for legalization in California,” stated Dave Hodges, MCLR proponent and founder of the All American Cannabis Club. “MCLR creates a comprehensive set of regulations to allow all types of cannabis businesses to flourish, and will net California billions in tax revenues.”

It's a laudable effort and there's lots of good ideas in the MCLR. But one powerful political group — cities and counties — are likely to fight it tooth and nail.

The MCLR would essentially immunize some of the worst unlicensed dispensaries in California from local enforcement. In an era where “local control” has become a mantra from the state Supreme Court on down — it’s hard to call the MCLR a consensus bill.

The MCLR states that: “collectives and cooperatives that exist as storefront dispensaries, delivery services, collectives, or cooperatives, as of the date this section is enacted, that are at least 600 feet from schools K-12, shall be exempt from any enforcement actions with respect to local ordinances, and shall automatically qualify as a medical cannabis retailer, and may register without any fee or regulations imposed by this division.”

Counties might spend millions of dollars on ads decrying the "legalization of the problem pot shops in your neighborhood".

As predicted here on this blog, California marijuana legalization 2016 is shaping up to be tussle between the pie-in-the-sky, die-hard reformers who can’t wait to proclaim “6 plants ain't real legalization,” and more consensus-minded, strategic activists. With legalizers divided, efforts could fail just like they did in 2010.