Just kidding, but seriously, we just learned this sad, sad news: Sam Adato's Drum Shop is closing its doors on Monday, December 24. The nearly twenty-year-old drum shop, located on 9th and Folsom streets in San Francisco, sells new and vintage equipment, and is one of the few places — besides A Drummer's Tradition in San Rafael and Drum World in San Mateo — catering specifically to drummers in the Bay Area, and one of the last remaining independently owned instrument shops in the city.

Sam Adato's was special because of Mr. Adato himself, a true drummer's drummer who always had an ear to lend or a suggestion to solve a problem, no matter if you were a beginner or a pro drummer. Known for his curly long locks and Eighties rocker look, he provided the kind of customer service that you don't often find at places like Guitar Center. 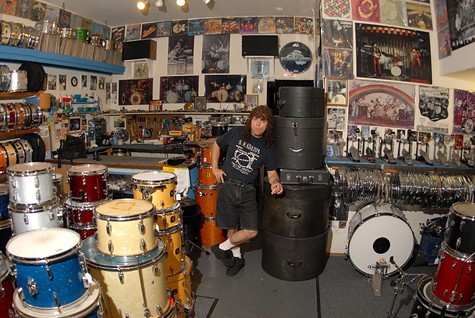 Explaining why he's closing the shop, Adato said, "I've reached a crossroads in my life where I can either go straight or make a turn. I decided to make a turn, have a change of pace, get out of the city."

He said the decision was largely based on changing market conditions. "Business changes; I'm selling less drum sets," he continued. "We're almost at Christmas Eve — I've had no parents coming in to buy their kids a beginner's drum set. There's no Christmas rush. Amazon, online — everything's changing, not just in San Francisco; it's everywhere."

Nonetheless, Adato said he's not actually giving up his business. Instead, he's moving the store to Eugene, Oregon. Is the market there better? "No," he replied. "It's a beautiful place to live. I went from LA to Santa Cruz to San Francisco. Now it's time to move again."