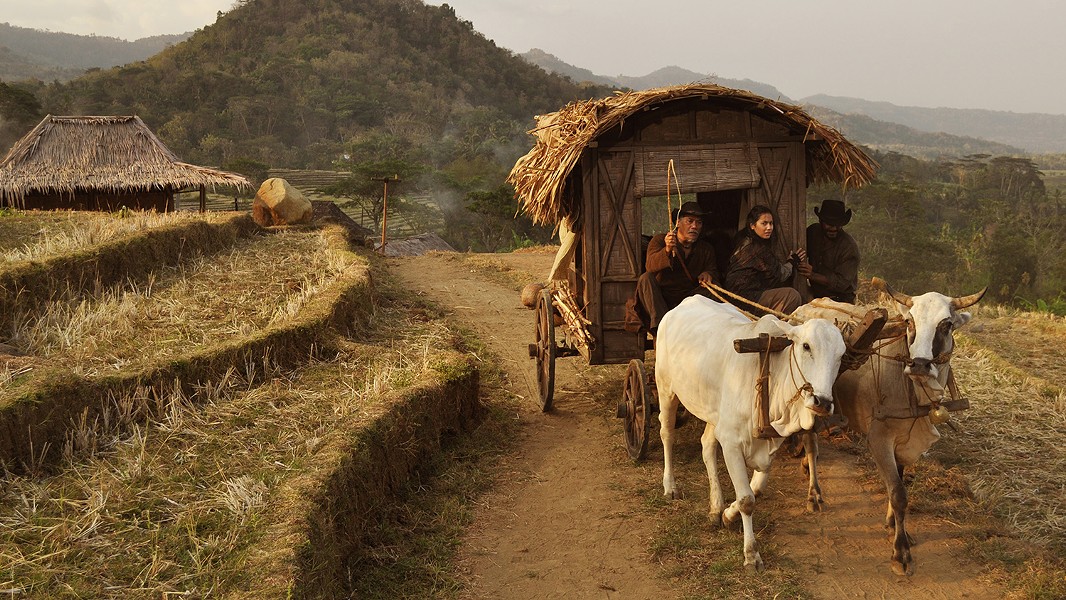 Crazy Rich Asians sent American moviegoers — especially the Asian-American segment — into paroxysms of joy last summer with its glossy, feather-light spectacle of corny romantic comedy, extravagant settings, and conspicuous consumption. But Buffalo Boys, the new "Bami Goreng Western" (as opposed to old-fashioned Spaghetti Westerns), may be closer to what audiences in Asia want to see: a richly detailed, expensively produced, ultra-bloody action fantasy with enough culture clash subtext to get the juices flowing.

Produced out of Singapore by filmmaker Mike Wiluan (a co-producer on Crazy Rich Asians), Buffalo Boys wants us to believe that a pair of Indonesian brothers named Jamar (Ario Bayu) and Suwo (Yoshi Sudarso) react to the murder of their father, the sultan, by fleeing to California, circa 1860, along with their uncle Arana (Tio Pakusadewo). They amuse themselves there for about four minutes by beating up racist white goons, but their true mission is to return to Java and get even with the interloper who done the deed, dissipated Dutch colonial officer Van Trach (Reinout Bussemaker, phoning it in), master of vice and corruption.

So two guys in cowboy hats set out to save their Indonesian homeland and avenge their father's death by spanking loathsome European colonialism with an array of Rambo-style firearms. And into the bargain, to rescue lovely young women like Kiona (Pevita Pearce), the village chief's warrior daughter. Pretty silly stuff, but ultimately no dopier than, say, Black Panther. And far more relevant, in its social justice-seeking way, than Crazy Rich Asians.

Buffalo Boys, Singapore's official entry in the Foreign Language Film category of the upcoming Academy Awards (it did not make the short list), takes full advantage of its co-prod partnership with the flourishing Indonesian film industry. The Java countryside locations are filmed in a glorious golden haze by veteran Australian cinematographer John Radel, and the props and wardrobe — including traditional kris daggers, golok machetes, sarongs aplenty, and the water buffaloes that give the unlikely heroes their nickname — lend the film some authenticity.

Actor Sudarso, a Jakarta native schooled in the U.S., matches up well with his character Suwo's love interest Kiona, played by Welsh-Indonesian singer-actor Pearce. And despite the apparent lack of enthusiasm by villains Bussekemaker and Daniel Adnan (as Drost, the captain's leering henchman), the anti-colonial theme — courtesy of the screenplay by Raymond Lee and director Wiluan — labors mightily to keep up with the standard-brand martial arts mayhem.

Try as we might to differentiate the subtext from the front story, the revenge plot can't help get tangled up with the two brothers' insurgency against the foreign invaders. In dialogue, we learn that the Dutch are burning rice fields in an effort to clear the land for the cultivation of opium — so villagers are starving while their colonial masters profit from narco exports. Dutch troops and their Indonesian lackeys rape village women and operate brothels that look suspiciously like Old West saloons.

Graphic scenes of public execution and the torture of Van Trach's native "wife" (more like his concubine) frequently take Wiluan's film into Tarantino territory. One inexplicable vignette even features a stereotypically "tricky" Chinese shopkeeper attempting to sell a used condom to our heroes — try reconciling that with the Indonesian anti-Chinese racism on display in the 2012 documentary The Act of Killing. Meanwhile swordfights produce geysers of blood, and showdowns lifted from The Wild Bunch are cued to imitation-Ennio Morricone soundtrack music.

Buffalo Boys is not without its clumsiness. At times it seems unsure whether to pander to the prejudices of its domestic audience, or to adopt a film festival-friendly theme of righteous national liberation. But the talent behind it is obvious, from its Indonesian and Singaporean producers down to the character players fighting for women's rights while riding water buffaloes and firing shotguns. It's the Wild East. We have to take it as we find it. 