A look at the brightest justice on the U.S. Supreme Court, who had to fight twice as hard to get there because she's a woman. 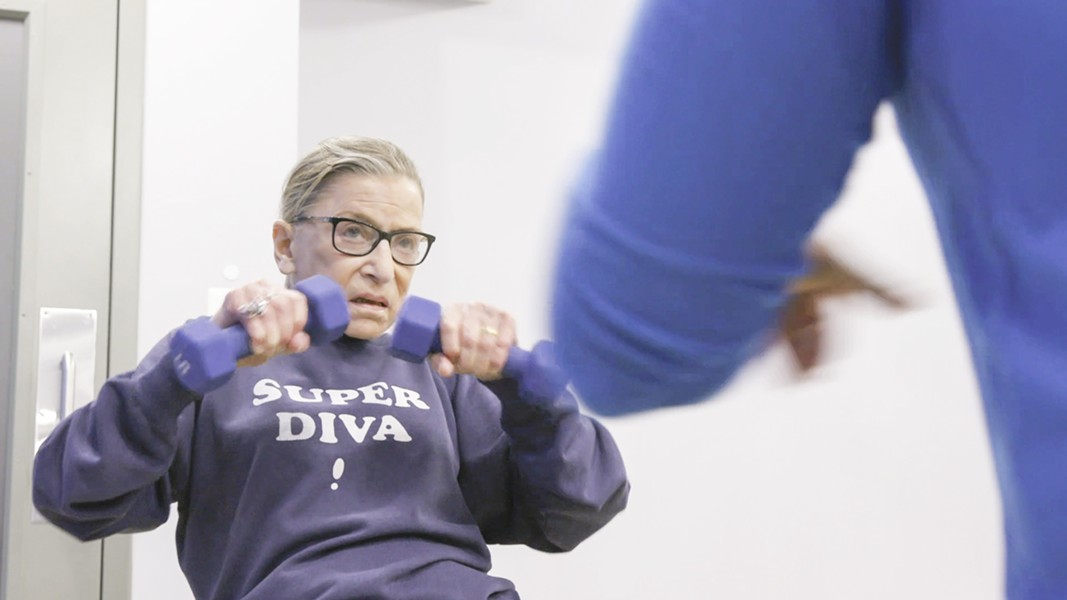 Ruth Bader Ginsburg, associate justice of the U.S. Supreme Court and the subject of the informative new documentary RBG, is hated by all the worst people: Donald Trump, right-wing talk show hosts, corrupt lawmakers, etc. So, she must be doing something wonderful, even though the details of her career have received less media attention than the average standup comedian. To remedy that, filmmakers Betsy West and Julie Cohen relate Ginsburg's life and times as a classically American success story. If you think you like — or despise — her now, you'll feel all the more strongly after you see it.

The hook for West and Cohen's biodoc is that although Ginsburg has proven herself a magisterially eloquent defender of equal rights, it's her recognition as the second woman to serve on SCOTUS that has propelled her to pop-star status among young civil rights lawyers and other liberal admirers who gave her the tag "The Notorious RBG." At age 85, Ginsburg is just as likely to be pictured working out at the gym or appearing on late-night TV as arguing in court. But it wasn't always that way.

From her beginnings as the daughter of Russian Jewish immigrants in Brooklyn, New York, the petite Joan Ruth Bader was known as a "shy, quiet, soft voiced" student (her nickname was "Kiki"), but also as a serious-minded individual uninterested in small talk and "girl chat." As explained by Ginsburg herself in voiceover and onscreen interview, her trajectory took her through the Red Scare of the 1940s and '50s, and "taught me that the way to win an argument was not to yell."

When she entered Harvard Law in 1957, women constituted only 2 percent of the enrollment. Upon her graduation from Columbia University Law as a working mother in a male-dominated profession, she was unable to find a job in New York City in the days when, in the words of plaintiff Sharron Frontiero, "nice girls didn't file lawsuits." Ginsburg soon took up gender law and sex discrimination cases, inspired by the principles of justice Thurgood Marshall.

We're immediately impressed by Ginsburg's piercing gaze. She's the very picture of a brilliant workaholic who "refuses to be branded inferior." But more important than her striking beauty are her erudite moral arguments. As Ginsburg litigated in favor of the Equal Rights Amendment and worked with the American Civil Liberties Union, one of her most persuasive points was that "sex discrimination hurts everyone." In 1993, President Bill Clinton nominated her for the Supreme Court, and she has spent her time on the nation's highest bench moving the equal rights discussion forward — "never in anger" — and seeing her efforts as an opportunity to teach, especially when faced by ingrained prejudice and injustice.

Filmmaker Cohen has been a producer for Dateline NBC; her co-director West has produced a full roster of socially driven documentaries on civil rights issues, also for television. Together, they present RBG as an overachiever and masterful legal mind, initially disappointed by the rejection she encountered, whose aim has been to have sex discrimination considered in the same terms as racial bias — as an obstacle to be overcome. Ginsburg has become more public and vocal with age — her candid anti-Trump statements have galvanized progressive lawyers — and she clearly enjoys her reputation as a role model for young women. But she has always been guided by the words of 19th-century abolitionist Sarah Grimke, who declared: "All I ask of our brethren is that they take their feet off our necks." Ginsburg is a woman we instinctively want to know more about, and RBG gives us that chance.