Struggling to find readers, small East Bay presses put together an art exhibit of their overstock at the Berkeley Art Museum. 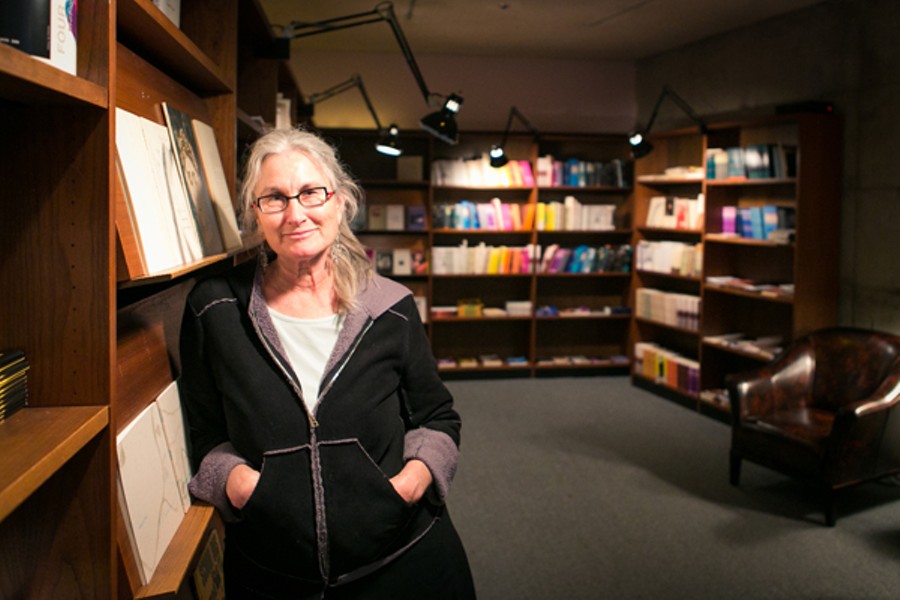 Authors who have been published by major publishing houses know that the lifespan of their book is almost always short and tragic. "For larger publishers, some books will come out on a Monday, and by Friday, they'll be out of print and dead," said Brent Cunningham, operations director of Small Press Distribution, the only distributor in the country dedicated exclusively to independently published literature.

At small presses like the ones Cunningham works with, the profit motive is smaller and the books live longer. But that doesn't necessarily mean anyone is going to buy them. In many cases, the books become furniture, or potentially collapsing safety hazards. "Our books could take up a few football fields," Cunningham said. That's what happens when you love books too much: You can't get rid of them.

This became a serious problem for Berkeley's Kelsey Street Press. Ramsay Bell Breslin, one of Kelsey Street's editors, knew the press had to either throw away the overstocked books or pay $60 a month to store them. The latter option was complicated by the fact that funding sources had dried up after the publisher lost its nonprofit status.

editors, said the press with faced with destroying the overstock of books or paying $60 a month to store them.

Then, while going through a pile of books one day, Breslin couldn't help but admire the texture of the hardcovers, the smell of the pages, and the inclusive nature of the book spine. Kelsey Street Press may be releasing its first e-book later this year, but Breslin, like many bibliophiles, still has a thing for the physical presence of books.

"Books have always felt like art to me," Breslin said. "I've always thought of them as objects. It always made sense to me that they should be displayed in a museum."

So last fall Breslin started working with Lawrence Rinder, the director of the Berkeley Art Museum and Pacific Film Archive, to create an art exhibit out of her overstock. The idea was to solve a financial problem by highlighting the physical appeal of books from local presses in the East Bay.

Rinder loved the idea. "Museums are asking the same questions bookstores are," he said. "I mean, why go to a museum if you can just look at pictures online in high resolution? It's about the experience."

Dubbed "The Reading Room" and curated by Breslin, the exhibit opened in mid-January and runs through June 17. It resides in the museum's lobby and features poetry and experimental fiction from local publishers like Kelsey Street Press, Atelos Books, and Tuumba Press. On the surface, it looks like an old-fashioned bookstore: there are several bookcases, two giant cozy chairs, a blanket for snuggling, and reading lamps that hang from the shelves.

Actually, said Breslin, The Reading Room is a book in and of itself. "You can read it from left to right," she explained, walking through the exhibit one recent day. "On the first shelf, the books face forward," she said. "On the next shelf, the same books are facing backwards." Then we came across books that were not yet born — their covers were laid out flat. "These are book flats, with no spines, before they've been printed," she said. Some books appear multiple times, creating a syncopating rhythm. Other books are organized by size or by color, forming a rainbow. Overhead, through speakers, the quiet voices of poets reading play. Breslin said her goal was to create a sense of quietude, "as opposed to that enforced library silence."

The temptation to grab the blanket and read a book for the rest of the day was powerful. But the books themselves are not so easy to tackle. Many are experimental, or genre-bending. Poetical Dictionary by Lohren Green, for example, is written as though it were a dictionary and fiction, all at once. Perhaps that's the point of The Reading Room: to force people to be brave and discover new books they might otherwise overlook.

To further encourage discovery, the museum instituted a "take a book, leave a book" policy. Initially, this element concerned some authors, who worried that giving away their books for free would give readers the impression that they're not of value. But Cunningham, who contributed some books from Small Press Distribution to the exhibit, believed this would be offset by the potential to engage new readers. "We're hoping that it'll be like a gateway drug for small presses," he said. "People will get one experimental book they wouldn't normally read, and become addicted."

The sharing aspect also adds a dynamic angle to the exhibit. Museum-goers have left everything from children's books to homemade 'zines on the shelves. "The Reading Room is about experiencing books," said Rinder. "It's a shared conversation. If someone takes a book, the exhibit changes completely."

Naturally, a reading series seemed an appropriate accompaniment to The Reading Room exhibit. RE@DS, hosted by poet/author David Brazil and poet/publisher/SFMOMA community producer Suzanne Stein, invites young poets to give a reading that incorporates multimedia elements, just as The Reading Room incorporates both the museum landscape and poetry. "The readers have complete creative freedom," said Stein, "except with some limitations presented by budgets and safety."

In one performance, San Francisco poet Christian Nagler invited the audience to do calisthenics while he gave a lecture on the economics of equity. In another, poet Tom Comitta led the audience in a "guerrilla opera," which entailed singing from a book of poetry for forty minutes. "Everyone participates," said Comitta. "Even if you aren't doing anything, people will notice that, too. You can play with a person you've never met before, or you can sit alone in a corner."

At Brian Ang's reading on March 23, the scene was as serious, intellectual, and literary as can be. When Brazil introduced Ang as the night's reader, Ang did not stand up and rise to the front of the room as expected. Instead, a composition by multi-instrumentalist Anthony Braxton played for a few minutes. Some members of the audience closed their eyes; others fidgeted, texted, or read from Occupation Treatment, the free book by Taylor Brady that had been left on everyone's chairs. After describing his collection of poetry, Pre-symbolic, as the "most encyclopedic collection of poetry ever written," Ang read some poems: "Onset of mechanical reproduction transformation/Haphazard administrative visible imagined/incorporated morphology aesthetics/Metaphysical greasepaint/Generations of science theory."

The Reading Room isn't the only East Bay exhibit melding books with art. Pictures + Words, a new artist series at the Bay Area Free Book Exchange that runs through July, invites artists Philip King, Michelle Wilson, and Timothy Buckwalter to use pages from books to create narratives in ways typically associated with literature. "I love books, don't get me wrong," said Wilson. "But sometimes text locks the story in. I'm interested in creating a story without doing that." The pages, which Wilson made, will not be displayed in order, forcing readers to make up their own stories.

Inspired by The Reading Room, Small Press Distribution is also hosting a reading series and book giveaway on April 30, the last day of National Poetry Month. While reading series usually entail people reading out loud, in this series poets will read silently, in their heads, which you can watch, if you'd like. Or you can just grab a book and run. The old rules of what can and cannot be done with books have, it seems, vanished. 