The Political Is Made Personal in The Insult

Ziad Doueiri's incisive drama is a fascinating glimpse into one of the world's perennial trouble spots. 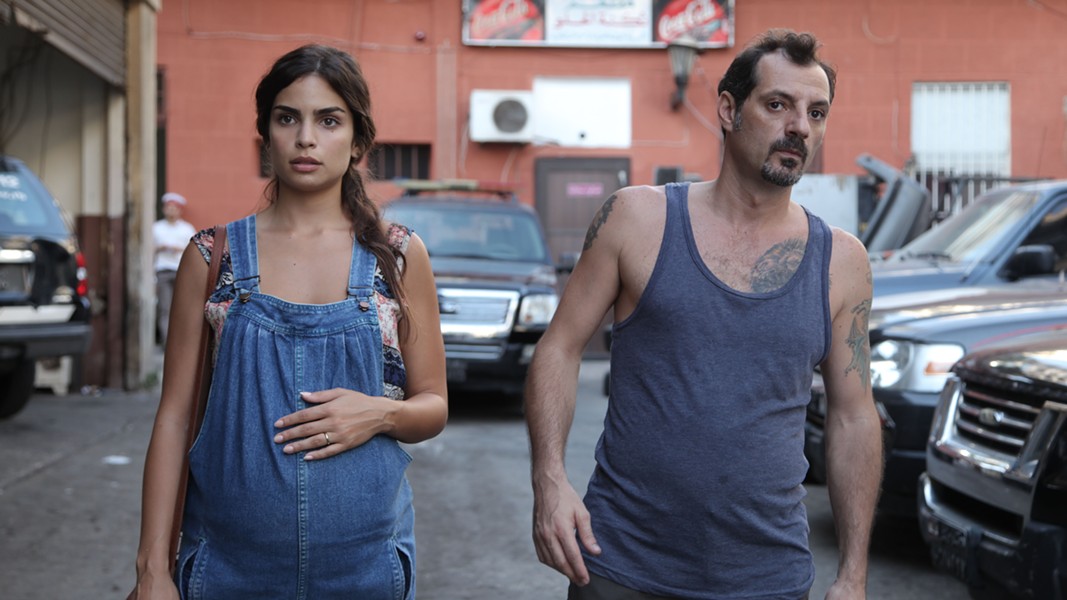 An apartment dweller gets into a dispute with a construction crew over a drainpipe sticking out from the apartment's balcony. Sounds like a very minor event, hardly worth mentioning. But the setting is contemporary Beirut, Lebanon. The apartment owner and his wife are Lebanese Christians, and the boss of the construction crew is a Palestinian refugee. Tempers flare, and the construction boss punches the apartment owner. Suddenly we have a potential international incident on our hands. Or, in the case of Ziad Doueiri's The Insult, a fascinating cinematic glimpse into one of the world's perennial trouble spots.

Filmmaker Doueiri's drama, co-written with Joelle Touma, is also a window into the thinking of its two stubborn main characters. Tony the apartment owner (Adel Karam) and his wife Shirine (Rita Hayek) are expecting a baby. Shirine wants to move from the city to a quieter place. Her husband Tony, a hothead who listens to Lebanese Christian talk radio, is the type of guy who, when riled, can't resist provoking his Palestinian opponent with a taunt involving the name of former Israeli Prime Minister Ariel Sharon. Yasser the construction boss (Kamel El Basha), a man with anger issues of his own, answers the taunt by breaking Tony's ribs, then later demands an apology for the insult. The imbroglio ends up in court.

Filmmaker Doueiri, a Lebanese native who studied in the US and worked as an assistant camera operator on such Quentin Tarantino projects as Pulp Fiction and Jackie Brown, now splits his professional time between Beirut, Western Europe, and the US. Beirut's position as a multi-cultural city in a region torn by sectarian strife - with Muslims, Christians, and Jews living uneasily within rocket range of each other, poised for a conflict - is something Doueiri understands from experience. That potentially explosive proximity evidently informs Doueiri's outlook, as reflected in his Israeli-produced 2012 drama The Attack, the thoughtful story of a Palestinian-Israeli surgeon in Tel Aviv coming to grips with the fact that his late wife was a suicide bomber.

The Insult brings that familiar tension home to Beirut, with a roster of intense performances to add the human dimension to what is essentially a courtroom drama - with the court as a microcosm of the Mideast situation. Advising the intransigent Tony is lawyer Wajdy Webb (Camille Salameh), a veteran of controversial cases between Muslims and Lebanon's Christian minority. Webb's independent-minded attorney daughter Nadine (Diamand Bou Abboud) takes the side of Yasser. The case eventually draws the interest of government officials.

The elder Webb has the well-fed, neatly groomed look of a political fixer, well accustomed to the glare of publicity and unafraid to stir up anti-Palestinian feelings to defend his client. The 1976 massacre of Christians in the village of Damour, by Lebanese leftist militiamen and Palestinians during the Lebanese Civil War, is brought up as a justification for Tony, who barely survived the attack as a six-year-old. Among other hurtful tactics by both sides, Tony and his counsel are branded as "Zionists." Two rhetorical questions are posed to the court in relation to Tony and Yasser's disagreement: "Do Palestinians really belong in Lebanon?" and "Does any one side have a monopoly on suffering?"

Doueiri's film might have served its basic purpose as a documentary. But then we'd miss reading our own interpretations into the strained faces of the two opponents, and the philosophical jousting between the lawyers. It's obvious that the complicated Lebanese political situation is not easily fixed. Any solution, any cessation of hostility, is up to people like Yasser, who has his own issues going back to a refugee camp in Jordan, and Tony, who more than anything else about his destroyed hometown misses the banana trees. The political boils down to the personal. Filmmaker Doueiri relies on the details of everyday life - a marital misunderstanding, a squabble between a contractor and his work crew, the long-buried pain of a refugee - to illuminate the sort of story we'd glance at in a news queue without bothering to read it. This happens, he's telling us. And the people it happens to you aren't much different than you and me.