Michael Schiess has amassed the world's largest collection of rare pinball machines. But the future of his Pacific Pinball Museum remains uncertain.

Stephen Loewinsohn Michael Schiess wants to expand his Pacific Pinball Museum, but so far he can't find a home for it.

Stephen Loewinsohn Pinball art, such as this back glass, reflected the times. 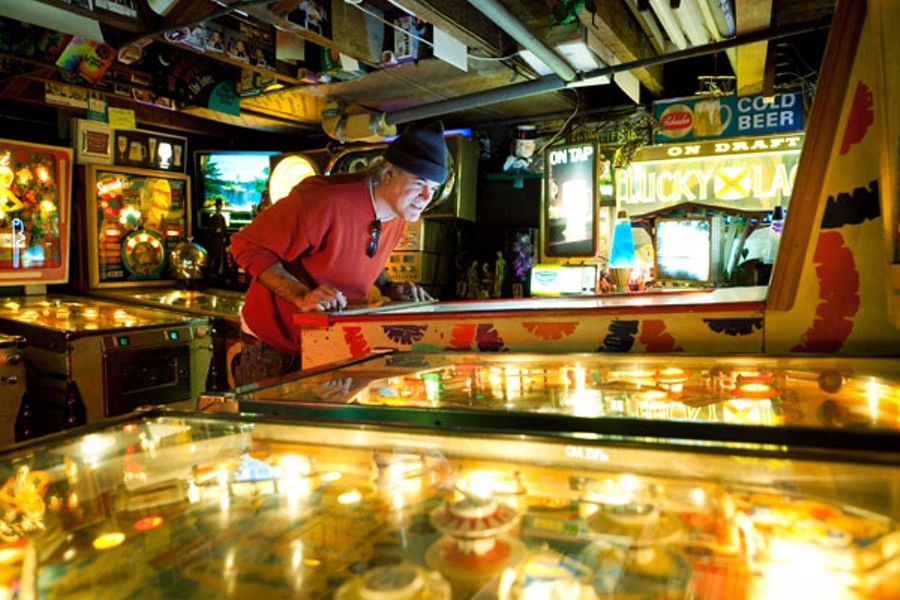 Stephen Loewinsohn Pinball Mac still holds private pinball parties in his basement in Berkeley, but he thinks the game's money-making days are over.

Stephen Loewinsohn The Pacific Pinball Museum relies on volunteers like Christopher Nash, aka "The Pinball Doctor," who travels to Alameda twice a year from his home in Portland, Oregon, to help repair and restore the museum's collection.

Stephen Loewinsohn Seven hundred pinball machines are stored in a warehouse in Alameda because the museum doesn't have room to display them.

Since he was thirteen years old, Michael Schiess has been obsessed with pinball machines. He has driven across the country to collect them. A year and a half after starting his Pacific Pinball Museum in Alameda, he has never taken home a salary higher than $1,600 a month, so he and his wife make ends meet by renting out the bottom half of their house. When doctors recently informed him that his arthritic hip may need to be replaced — meaning he could never lift a pinball machine again — the 56-year-old electric mechanic responded, "No, thanks. See you later!"

As a result of his dogged perseverance, Schiess now manages the largest collection of rare pinball machines in the world. There are seven decades' worth of playable pinball machines in his 4,000-square-foot museum, the first to publicly curate the games as artifacts of American art, science, and pop culture. But he believes that the preservation of the collection depends on the museum expanding into a bigger and more permanent space.

Specifically, Schiess has his eye on creating a 40,000- to 50,000-square-foot "Smithsonian of pinball museums" in a long-vacant warehouse on Alameda Point. He pictures it becoming a recreational destination that draws people to the city the way Neptune Beach, the legendary beachfront amusement park, did in the early-1900s. The problem is, the City of Alameda doesn't seem to give a damn. So far, city officials have not responded to Schiess' requests for support, or even to his invitations to visit the museum.

"For how many people we bring into the city, it's amazing how much they ignore us," Schiess said. "I thought when we asked about this old, vandalized space they were going to say, 'Sure, fix it up. What else are we going to do with it?' But before they'd even let me see the inside, they wanted me to draw up plans and see how much money they could get out of us."

Schiess' museum not only preserves an endangered piece of American history, but it could also be a huge boon to the island city, and to the East Bay. Despite the fact that video games have almost completely decimated the pinball industry, and that only one company in the world, Chicago-based Stern Pinball, still makes pinball machines, Schiess believes we're in the midst of a full-blown pinball renaissance. And, indeed, he appears to be right.

Pinball tournaments have grown so popular at the Pacific Pinball Museum that Schiess stopped advertising for them. On one day in December, more than 4,000 people bought admission tickets through Groupon. Increasing numbers of youth groups visit the museum for field trips, and he's booking more and more pinball parties. A showcase at the San Francisco International Airport featured the museum's pinball games as art, while companies such as Google and Genentech have rented part of the museum's collection for company events. The annual Pacific Pinball Expo Schiess helped start and organize for the last four years in San Rafael now draws thousands of visitors from more than twenty countries, and is the largest pinball expo in the world. And if imitation is a form of flattery, the Pacific Pinball Museum is getting plenty of it from pinball museums now popping up all over the country — even in Australia.

But Schiess' machines — which are restored and repaired entirely by a crew of volunteers — may be threatened if he doesn't find a new home for them, and soon. The lease on the warehouse where he stores them is up for renewal in a few months, and he's growing increasingly uncertain as to whether his collection can continue to be stored there. Protecting the games from the water that seeps through the leaky roof is of utmost urgency. Trickling water currently threatens the rarest flipper-era machine, Mermaid, an illustrious 1951 David Gottlieb masterpiece valued at $17,000.

"We've got a lot of important American culture here," Schiess said while working in his warehouse one evening. "And we want to be in a facility that should be totally clean and environmentally controlled. But we're in a warehouse because this is what we can afford. We don't get any funding and grants — this is just a lot of people throwing their backs into this thing and making it work."

So far, he's been unable to afford a large space anywhere else. There is a small chance that the pinball museum could move next to the Exploratorium when it eventually relocates to San Francisco's Embarcadero waterfront. But in the meantime, Schiess just hopes that he and his volunteer team can keep the ball rolling in the East Bay.

For how much longer, however, is unclear.

This gambling mania is even worse than liquor as a spectacle of complete waste. It's a waste of money, a waste of time and social waste. The very atmosphere of respectability associated with slot machine clubs adds to the sum total of evil." — Daniel A. Poling, national church leader speaking out against pinball clubs in the Spokane Daily Chronicle, 1949

Schiess was thirteen and living in Albuquerque, New Mexico, when he got hold of his first pinball machine. His father was an engineer and a tinkerer with a backyard scrap heap. When a nearby car wash closed, Schiess rolled a wheelbarrow down to the abandoned site just to see what interesting junk he could find. "One of the things I found was this big arrow with all these big bulbs on it that would light up," Schiess recalled. "I got it going again and traded it to my friend for a pinball machine. I'm pretty sure it was a Gottlieb Kings and Queens. We beat the crap out of it."