The Mother and the Officer

Years after a fatal police shooting, one of the cops responsible is helping the victim's mom seek answers. 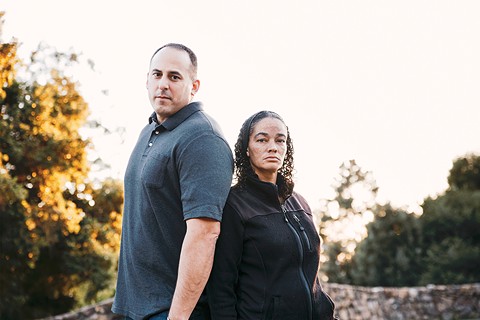 Sergeants Jonathan Bellusa and Barhin Bhatt pulled up behind a car that was parked on Joaquin Miller Road in the Oakland hills on the night of Jan. 22, 2011. Inside the Honda, Raheim Brown and Timesha Stewart were smoking weed and eating fast food. At the time, the two Oakland Unified School District police sergeants were working security for a school dance, and they were unaware that the Honda was stolen. But they thought it was parked in an unusual spot. So, they turned on a spotlight and approached.

Sgt. Bhatt went to the driver's window toward Stewart, who was behind the wheel. And then when Bhatt was about to ask for Stewart's identification, Brown, who was startled, told Stewart to ignore the officer and drive away.

At the same time, Sgt. Bellusa approached the passenger side and opened Brown's door. Almost immediately, he was grappling with Brown, and everything started to go wrong.

Brown was fumbling with a screwdriver in the ignition, trying to help Stewart start the Honda. Bhatt reached through the driver's-side window and struck his flashlight at Brown, but hit Stewart instead. Bellusa, who was halfway in the car now, believed Brown was stabbing toward Bellusa's throat with the screwdriver.

What began as a traffic stop had rapidly escalated into a brawl with two officers trying to detain Brown and Stewart.

Bellusa later told police investigators that he bailed out of the car and shouted to Bhatt: "Shoot!" He said he then looked down and saw a small revolver buried deep in the pocket of the passenger door. He thinks he yelled, "Gun!"

What happened next isn't clear. The stories of the people involved differ. But in all the official accounts — the Oakland Police Department's case file includes about 140 pages of notes, diagrams, and photos from more than a dozen officers — Bhatt drew and fired. Again and again. Seven slugs ripped through Brown's body.

Stewart recalled the 20-year-old Brown saying, "Help me, sis," as he died.

From the start, Lori Davis was convinced that Oakland school police had murdered her son, Raheim Brown, and that the case closely mirrored thousands of other unjustified fatal shootings of young Black men by police in the United States. She led protests against the school district and its police force calling for criminal charges. And after Oakland police, OUSD police, and Alameda County prosecutors declined to bring charges against either Bhatt or Bellusa, she sued the Oakland school district, desperate to uncover the truth about what had happened to her son.

Four years later, long after she settled her lawsuit against the school district and the controversy of her son's killing had quieted in the media, her life changed dramatically. In an unusual turn of events, she learned that Bellusa had also been fighting the school district and other cops, almost from the start, alleging that the shooting was never properly investigated and that the official version of her son's death was wrong.

Davis despised Bellusa. But after an Oakland teacher and activist who had joined Davis in protests connected her with the former sergeant via email, she decided to give him a call.

She and Bellusa eventually met up and started talking. And the two — an African-American mother of a young man killed by police and a white cop who was involved in her son's death — quickly bonded and became a most unlikely team.

The two now describe themselves as being on the same side. "That man has been there for me emotionally," Brown said in a recent interview. "He's been a big support. I'm not gonna hate a man that, from the beginning, tried to come out with the truth."

Once a gung-ho officer from a family of cops, Bellusa left policing after the shooting, but his connection with Davis and his frustration with how the controversial incident was handled by authorities keep him from closing out the law enforcement chapter of his life.

And Davis, over the years, has found herself increasingly at odds with those around here, partly because she has refused to move on. She still believes her son was murdered, and says she won't rest until there's a prosecution — as unlikely as that may be.

And Bellusa won't drop the case because he believes corruption in the Oakland Unified School District prevented a proper investigation.

These days, Brown and Bellusa get together occasionally to talk at a suburban coffee shop in Antioch. But they don't discuss what happened that night on Joaquin Miller Road. The killing isn't something either wants to relive.

Rather, they talk about what happened next — after Raheim Brown was shot to death.

Nobody can definitively prove what happened to Raheim Brown on Joaquin Miller Road. Neither Bellusa nor Bhatt were wearing body cameras that night; their car had no recording system; and there were no other witnesses besides Timesha Stewart. But to this day, Bellusa says the shooting didn't go down the way it was officially recorded. He said the investigations were cut short and steered toward predetermined conclusions.

That's what bothers him most. He doesn't feel the school district was willing to face the truth. And so the district, according to Bellusa, robbed Davis of answers about how and why her son died.

He told all of this to Brown when they first started talking in 2015.

"I was crying," she said about their first conversation. "But it brightened my heart."