The Matter With Muir

The Sierra Club begins to confront its founder's flaws

"The very stones seem talkative, sympathetic, brotherly. No wonder when we consider that we all have the same Father and Mother." 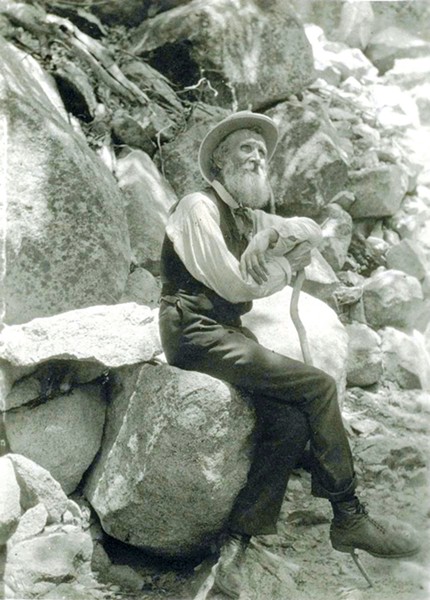 John Muir wrote those words in his classic 1911 book, First Summer in the Sierras. But this is the same man who called the Paiute Native Americans "lazy" and "superstitious" when he first encountered them in his mountain wanderings. He is also the same man who called Black Americans he observed during his 1867 thousand-mile walk from Kentucky to Florida "Sambos" and "Sallies," who made a lot of noise while doing little work.

Muir was one of the first to accurately understand the role of glaciers in geologic formation of valleys. He wrote field studies of the giant Sequoias that have been used for decades to help preserve them. He was instrumental in the creation of what became Yosemite National Park, successfully pushing to transfer ownership of the park from state to national control in 1906.

In 1892, he co-founded the Sierra Club and remained its president until his death. Multitudes of mountains, historic sites, wilderness areas and even a mineral are named after him. But he was a white male, who unquestionably, despite views that seem to have evolved during his lifetime, viewed anyone who wasn't as inferior.

I was unaware of anything except Muir's positive contributions when, in 2017, I stood in a community garden arguing with one of the organizers of the local climate march. I'd written an agitprop skit that I wanted included in the post-march presentations, and the organizer was insisting on a rewrite. "We have First People leading the march," she said, "and they don't like John Muir." Muir, along with three Big Oil Dudes who all looked like Rex Tillerson, and a two-headed Trump pinata, were characters in the skit.

"John Muir founded the Sierra Club!" I screeched, incensed at what I saw as a smug attempt to out-PC me.

"He was a racist," said the organizer, standing her ground. In the end, the skit was an "unofficial" part of the march. Ironically, the First People I encountered had no problem with it at all. But I had to reckon with my own assumptions about, and, in this case, ignorance of, the past.

Fast forward to July 22, 2020, and an announcement by the Sierra Club that made headlines across the country. Sierra Club President Ramón Cruz and Executive Director Michael Brune released a statement from the Club's Oakland headquarters reading, in part, "The Sierra Club is a 128-year-old organization with a complex history, some of which has caused significant and immeasurable harm. As defenders of Black life pull down Confederate monuments across the country, we must also take this moment to reexamine our past and the fact that some of Sierra Club's early members played a substantial role in perpetuating systemic racism."

The Club would begin a series of posts in which "we will talk in depth about steps we're taking to make the Sierra Club an actively anti-racist organization, and to understand and help repair the harms we have caused."

This willingness to confront the less-savory aspects of its past (and its founder), have put the Club squarely in the maelstrom of ongoing re-evaluations, similar to the controversy swirling around Planned Parenthood, as it acknowledges the eugenics beliefs of its founder, Margaret Sanger.

Michael Brune agreed to answer some additional questions about the Club's actions, and plans going forward.

East Bay Express: Were you aware of John Muir's early writings on Native and Black Americans before the Club made its recent statement?

Michael Brune: The origins of the Sierra Club are no secret, nor are the white supremacy undertones of the environmental movement. Black, Indigenous and people of color environmentalists have been calling for justice for decades, and we have finally found the courage to shift our focus to answering their call.

EBX: How should we evaluate these writings as we continue to value his contributions to the modern environmental and wilderness preservation movements?

MB: There were many things of value about Muir's writings, many thoughtful lessons about the interconnectedness of all life on this planet. But the fact that he took so long to recognize his role in perpetuating racism against marginalized communities should make us all want to look more critically at his entire life.

EBX: Are you concerned that this action by the Club could be used politically by opponents of the Club's goals?

MB: People who oppose our work to protect the global climate and combat environmental injustice try to tear down the Sierra Club and the environmental movement every day. By owning up to our history, we hope to build a more inclusive movement where people of all identities are welcomed and celebrated.

EBX: How does the Club's willingness to address Muir's writings fit in with other, similar re-evaluations, such as Planned Parenthood's statements about Margaret Sanger?

MB: There's an uprising happening in this country, and it's impacting every institution and every community. It's not a coincidence that many of us in the "progressive" movement have found the courage to confront our sordid histories around the same time. It's a reflection of powerful leadership from Black, Indigenous and people of color activists who have been steadfast in their demands for justice, equality and accountability.

EBX: The term "cancel culture" is thrown around in the media a lot right now. In your view, how can we not "throw the baby out with the bathwater" as we rightfully reexamine history?

MB: We don't want to throw away or cancel John Muir. His writings about the sacredness of nature are the foundation of the environmental movement and are still relevant today. But that's no reason to pretend he was a flawless hero, or refuse to acknowledge the harm to Native and Indigenous peoples that the early conservationists were so directly connected with.

The "same Father and Mother" that Muir recognized would welcome that revelation.

(Disclosure: The author is a member of the San Francisco Bay Chapter of the Sierra Club)