The Kitchen Sink: New Rudy's Can't Fail Opening Within a Month, Plus Burgers, Pasta, and Other Carby Fun

The Five Guys burger: Coming soon to a mouth near you!

Here we go: this week in East Bay food and drink news, reviews, and miscellany. Enjoy!

General Manager Tracy Reinstein reports that construction is on track at Rudy's Can't Fail Cafe's new Uptown outpost, and that the restaurant is now set to open in mid-May at the corner of 18th and Telegraph in the same building as the Fox Theater. "Things are looking fantastic," she said. "It's going gangbusters, and it's a lot of fun." Reinstein said that the new restaurant will have a full bar as well as a private dining room, with seating for ten people and a private entrance into the Fox. Like the insanely popular original Rudy's, it'll offer cheap, classic American food in a kitschy-hip space and be open from 7 a.m.-1 a.m. seven days a week (which makes it the latest addition to Uptown's burgeoning late-night dining scene). 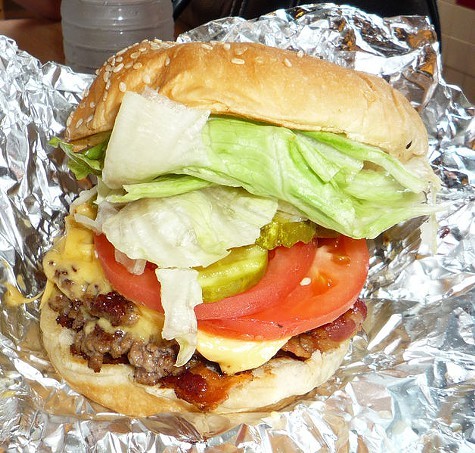 Five Guys, the East Coast analogue to In N' Out, is expanding into NorCal, according to The LA Times. The three confirmed East Bay locations are in Fremont's Pacific Commons shopping center, in Dublin's Hacienda Crossing shopping center, and in Pleasant Hill at 100 Crescent Drive. (The Kitchen Sink has been to one of the chain's Manhattan outposts, and it is, indeed, very good! Get excited, East Bay.)

Review Revue: The Chron's all over Albany's House of Curries in its "Bargain Bite" column, and the CoCo Times gives Livermore's Casbah a favorable review (with, of course, the obligatory Clash reference).

And finally, table scraps: Tipster Idalia notes that there's a liquor license application up for a place called "Skylight Cafe" at the currently vacant 357 19th Avenue in East Oakland. We'll keep you posted! And also, the longtime chef of Walnut Creek's Va de Vi, Arnold Pulido, has left the critically acclaimed restaurant amicably, according to Inside Scoop SF. He'll be succeeded by Shane McAnelly.