The Killer Inside Me

Five years ago, I became one of the thousands of men diagnosed every year in the U.S. with HPV-related throat cancer. 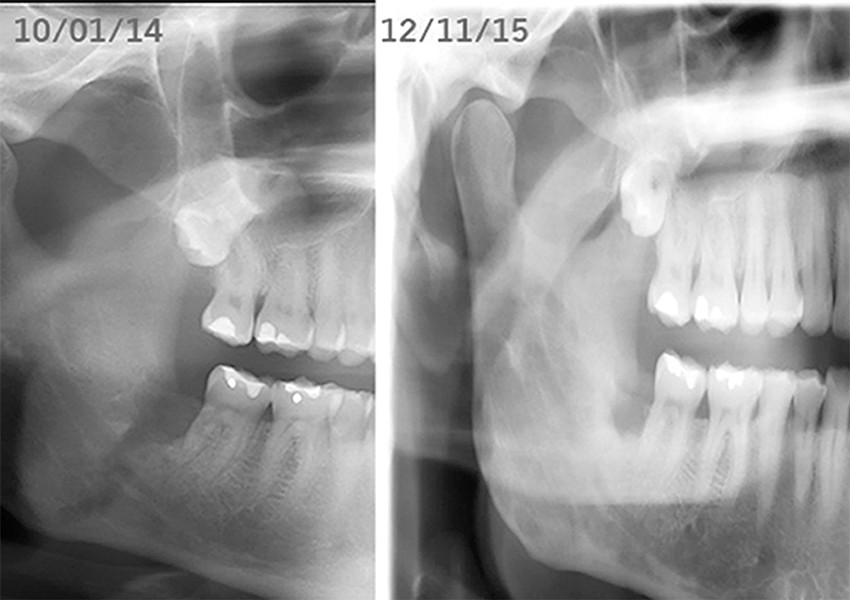 Meanwhile, I got a clean scan. "No evidence of disease," they say. I was cancer free. The treatment was considered a success. I was still too sick and tired to return to the workforce and it was only with the help of my family and my savings account that I was able to devote myself to myself. I started going to the YMCA five days a week. At night I read medical journals and case studies and searched for alternative treatments online. Still, there was a creeping numbness along the right side of my face and the nerve that runs along the jawline began to tingle. It was still too tender to chew on that side of my mouth so my left side did most of the work. I would then kick it over to the right side to give it a little workout before I swallowed. Slowly my taste buds began to return. I made fast friends with custards and crème brûlée. I became an authority on cream filling and began reviewing local doughnut shops on Yelp.

During one of these late nights I discovered something called osteomyelitis. It's a bone infection that is treated with IV antibiotics. If I had an infection then maybe this was a way out. I had to try. After speaking with my radiology doctor I was referred to an infectious disease specialist who laid out the risks involved with the procedure. It would require the placement of a peripherally inserted central catheter or PICC line. A small tube would be inserted in a vein in my arm, travel up toward my shoulder, and curve softly until the tip rested against my heart. I ran the risk of further infection and blood clots. I was told it was inadvisable.

This was the first time that I would have to make a case and fight for a treatment that others deemed foolhardy. It would not be the last. I was reluctantly prescribed a 30-day dose of IV antibiotics and the PICC line was scheduled to be placed.

I was to be visited by a nurse once a week who would draw blood, clean the site, flush the line, and change the dressing. My nurse was a guy called Romeo. He drove a BMW and smelled like a men's magazine. The line was fixed to the inside of my bicep and secured with a length of gossamer netting. It was concealed under a T-shirt and once it was in place, I didn't feel a thing. For the first couple of weeks, the blood tests revealed nothing out of the ordinary. Then, on the third week, I received a message from my doctor. This was it! I imagined an unprecedented admission. A turning of the tides that defied all conventional wisdom. Something that began with, "You're not going to believe this..." or "I don't mind telling you, I've never seen anything quite like this before..." I turned batty with expectation. When she told me my potassium levels were low, I could only shake my head and smile: "So, eat two bananas and don't call me, I'll call you?"

The whole event passed without fanfare and without results. Another x-ray after the procedure showed that my jaw was continuing to slowly disintegrate.

For this reason, I was sent to meet with a head and neck surgeon who explained a surgical procedure called a fibula free flap. It's a reconstruction of the mandible that involves the removal of the dead section of my jaw, which would then be replaced with a bone taken from my lower leg (the fibula). It would be sculpted, plated, and screwed into place and, with a little luck, would preserve its basic functions. He also prescribed a series of medications that, taken together, was a controversial but emerging protocol for osteoradionecrosis. It involved taking vitamin E (daily); something called Pentoxifylline (also daily), to increase blood flow; a bisphosphonate, usually prescribed for osteoporosis (five days a week); and an oral rinse called chlorhexidine, which I would swish and gargle four times a day. I left the office in state of lukewarm catatonia.

That evening I sat up reading about the surgery, and it was then that I was introduced to hyperbaric oxygen therapy (HBO). It was suggested as a part of the post-op protocol. It involves lying in a pressurized, clear acrylic coffin while breathing in pure oxygen. The idea is that it promotes healing in irradiated bone by increasing the amount of oxygen in your blood. It's both controversial and expensive. As I lay awake one night reading an article on microvascular surgery, I had a thought: Why not try hyperbaric oxygen preemptively to see if it might stimulate the blood vessels in my dying bone? Why wait until after the surgery? I hadn't been given any indication that I could heal myself. I was assured over and over that the best hope was to stop it from progressing. But what if? What if medications and the PICC line and the HBO therapy combined could regenerate cell growth? After I pitched my radiology oncologist, who agreed to back me up, I called a facility in Alameda and made an appointment for a consultation.