The Intersection of Poetics and Voids

With a fluidly lackadaisical cocoon of sonic rhythms, Astronauts etc. postulates the impossible with a delicate and beautiful ease. 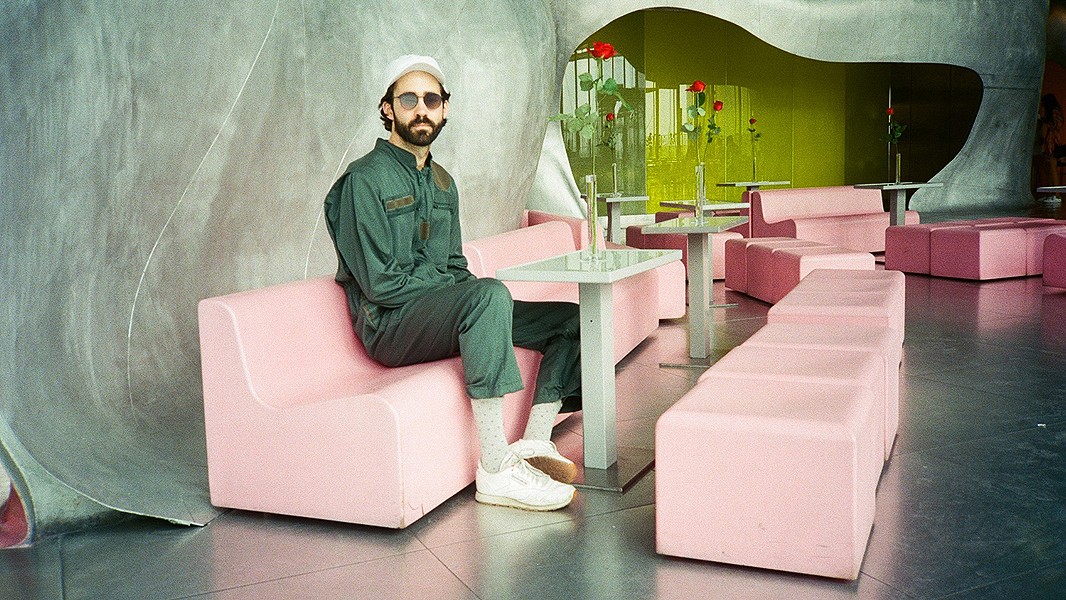 A marriage of amorphous poetics in wandering symbols — a swan, cherries, glasses, palms, a headless torso, a woman’s profile shrouded in bangs, a caged door — adorns the cover of Astronauts etc. album Living in Symbol. Anthony Ferraro (digitally known as Tony Peppers) intertwines the delicate play of substantiating the unknown within the dance of time through an imbued sense of lethargic whimsy.

From the album’s website, it describes Ferraro’s “take on tomorrow [a]s nonjudgmental, meditative, imaginative. … It keeps away from unqualified hope or outright alarmism, choosing instead to embrace the indeterminacy as food for dreaming.”

While attending college, Ferraro discovered himself becoming accustomed to a music scene that ignited a sense of inspiration and possibility from the context of learning to play with a band. When he entered into creative exchanges with mutually supportive individuals, a seismic shift diverted him to the unearthing of a new potentiality within his soundscapes. A notable friend and collaborator Chazwick Bradley Bundick, otherwise known as Toro y Moi, was his counterpart in actualizing Living in Symbol. The two met at a coffee shop in Berkeley and from there forged a friendship that led to Ferraro going on tour with him as their keyboardist. Both are signed with Company Records.

Ferraro has carved a space within the artistic community over the past 10 years, and his musings around change, timelines, and choices orient the listener to the backdrop of the changing technological landscape of the Bay Area. “The scene has always been spirited and welcoming,” he said in an interview. “Things do feel as though they’re reaching a sort of critical mass these days. I think there’s more talent and determination here than ever. It’s certainly more difficult to live here now, though, and that always seems to be threatening to put out the flame we’ve been nurturing.”

In the scope of creating and shifting energy to make music, he takes note to lead with executing rather than over thinking. He began playing classic piano at the age of 5 and played competitively throughout high school. In his creative development, his experience from classic theory paved a perspective that would allow him to expand and step out, redefine, and experiment within the paradigm set before him — a lucid process of unlearning and gaining momentum in a noble fruition of full potentiality within one’s creative self. That authenticity within creative expression is a mode that when done properly, can be truly captivating.

Inspired by the whims and passing questions that can be imbued into the day-to-day, Ferraro creates a nostalgic tide woven in an intermix of the lucidity of time and the humility within our humanity. Living in Symbol is a poignantly succinct declaration of how facades permeate throughout the unknown aspects of life we create and apply meaning to. The intersection of poetics and voids within the album’s sound presents a beautiful explorative look at how we bend and breathe through those spaces.

Without overindulging the narrative of ambiguity, the album dissects such themes in an evocative interlaced manner while exuding a lethargic angst in a poetic mixture of dreamy sounds. “A large part of writing LIS involved working feelings of deep alienation and detachment into a form that I could understand,” Ferraro said. “It’s a little selfish in that sense.
Sonically I was really inspired by outsider music — Skip Spence, Dave Bixby, that sort of thing. People who inhabited the edge of sanity and probably said far-out shit to their friends all the time and received puzzled looks in return. They make me feel less alone.”

By constructing an airy sound space of dimensionality that spawns a particular nostalgia, Ferraro draws inspiration from the likes of Salami Rose Joe Louis and David Lynch. In the music video for “The Border,” lo-fi pop sensations play with magenta aqua hues, analogue homages, and the grounded oaken tone of Ferraro’s voice brings the audience into a magnetized space in between yearning and dreaming. As his voice oscillates through a fabrication of interluded dissonance, his lyrics are a recluse of noble ponderings.

In the landscapes of sound, it is refreshingly bold to see artists who tackle the unknown while creating dynamic melodies that capture new narratives. To question is to be engaged, and cultivating that dialogue is a valuable and beautiful practice. 