The new Rockridge spot offers uninspired burgers and shakes rather than a distinctive point of view. 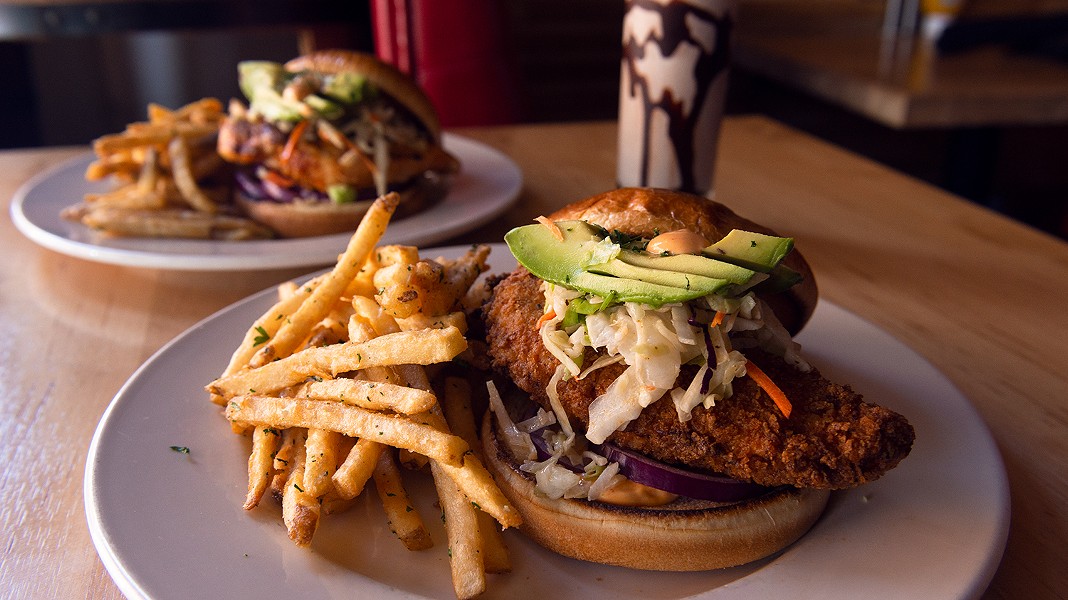 The Edible Complex cafe in Rockridge closed in 1999 but I still remember its miraculous fudge pie and the way the top crust cracked as you slid your fork through a slice. Of course, the taste of it is mingled with nostalgia for that time — my age of innocence. The Crepevine, which replaced Edible, is part of a competent, unimaginative local restaurant chain that has adhered to its menu over the years as if it were a piece of sacred scripture. Devotees come for the outdoor patio and the wall of windows that lets in natural light to the interior. If they return, it's probably not for the food.

A few doors down the street from the Crepevine, yet another restaurant, The Hideaway, is trying to establish its bona fides. Red Tractor Cafe packed its bags and moved to Dublin in 2003. Pearl Oyster Bar and Restaurant shut down in 2008. And before Bourbon & Beef closed at the end of 2017, the Water Lounge and Raw Bar made a go of it for several years. One factor that might account for the revolving door is the configuration of the space. The walls have been cleaved on the sides like the head of an iceberg lettuce and shaped into a wedge. Sitting inside the cozy red booths doesn't relieve the feeling of being enclosed — it amplifies it.

A mediocre concept executed indifferently can also put an end to a restaurant. The Hideaway, open since early 2018, is competing with Barney's Gourmet Hamburgers just down the block — and losing. The owners have made an initial investment in a generic identity in regards to both the menu and the decor. We sat beneath a collage of soup spoons glued to a canvas of black fabric. My guess is this was a bored server's attempt at wit, an artistic response to Andy Warhol's Campbell's Soup Cans. Thin beams of horizontal wood line the nearby walls. Two identical vases were filled with pussy willow branches blooming in brilliant synthetic reds. (I didn't have to touch the buds to know they were artificial.) A photograph on the extant Bourbon & Beef website shows the same lines of wood, red booths and buds, and circular array of spoons.

Apart from inheriting the prior restaurant's furnishings, the Hideaway tries to be all things to all people whose intention is to drink and then to counteract the effect of those drinks with a heavy meal. Thus, there are milkshakes and also liquored-up milkshakes that read like formulas for instant hangovers (e.g., the North Pole, a mix of vodka and peppermint Schnapps). My milkshake, a virginal chocolate one, did not bring all the boys to the yard. After a few minutes, the ice cream evaporated and I was left with a glass of warm, sickly sweet milk. That's never happened at Barney's. Its menu may be static but it's got the basics of an American greasy spoon down pat.

At the top of a menu that's mostly dedicated to burgers, a note tells us that the farmers and ranchers the Hideaway sources its meats from are part of a "NEVER EVER" program. The doomed cows are never ever "given any antibiotics, added growth hormone, or by-products in their feed." And the meat we tried was never ever seasoned. Whether it was the salmon, chicken, lamb, or beef burger, all were under- or unseasoned. In every case, the burgers in question were so uninspiring flavor-wise that they were left half-eaten on the plate. On paper, the salmon burger read like a clean-cut, assured winner, with only lettuce, onion, tomato, and a sriracha aioli. But the fish lacked any recognizable signs of salt, pepper, or a fine sear. The chef must have come to the conclusion, albeit an incorrect one, that the sriracha aioli would mask the blandness of salmon.

The kitchen took a similar approach with the ground lamb burger and the grilled chicken breast. When a bit of spice hit the palate, it was from the many garlic cloves crushed in the tzatziki sauce. Without it, the lamb, too, could have been meat made from any beast in the field. If an award was handed out for prettiest presentation, it would go to the California-style chicken sandwich. Half of a bright-green avocado jutted out from beneath a brioche bun, along with a mess of lemony, slightly pickled coleslaw. The dish would also win for the driest, overcooked bird. Does it bear repeating that sauces and slaws aren't magical remedies for meat that aren't cooked right? (The less said about a beef burger ordered medium rare, but served rare, the better.)

The appetizers and sides were particularly disappointing and recalled food I've ordered at several nondescript airports around the country. The burrata salad is misconceived. It's served on the wrong plate — a long platter — with the wrong greens thrown about haphazardly and drizzled with a too-sweet balsamic glaze. The flatbread that came with it was tough and chewy, and tasted like nothing — a blank space on the tongue. French fries and curly fries and onion rings were all greasy and, as Prue Leith likes to say, not worth the calories.

If, decades ago, I had set up a time-lapse camera in front of 5624 College Avenue, I'd have recorded the comings and goings of the many restaurant owners and diners alike. If I had another one that could see into the future, I'd be surprised if the Hideaway occupies the address for very long. The Crepevine has endured not because of any distinguishing characteristics but, rather, because it lacks any. It simply fits in there on the corner as well as it does in the Sunset or on Piedmont Avenue.

The Hideaway brings more of that same anodyne energy to the neighborhood. Commuters can stop in for an alcoholic milkshake on the way home, and then order a cheeseburger and fries to nullify its headache-inducing effects. But if someone in the neighborhood is craving a cheeseburger, shake, and fries, they'll figure out in no time that Barney's is still open and beckoning to you on the other side of BART's train tracks. 