The Guy Who Co-Wrote Kreayshawn's “Gucci Gucci” Just Dropped An Album — So Why Don’t People Care?

This is one of the spare elucidating verses from LA rapper Speak!’s new album Inside Out Boy. He’s frustrated and anxious, but honest. The release dropped late last Sunday night, much in the same way his friends in Odd Future put out their material: on a Tumblr blog as a free download with nothing but album art and a short subtitle. It’s a good album, too. It’s got a clean, cohesive sound and the beats are anything but generic. It was engineered and mixed by Odd Future’s Syd The Kyd, and has backing tracks from the OF crew, among other talented young producers. Speak (a.ka. Anthony Negrete) is a pretty smooth, arty rapper, and his verses are right in the save vein as Odd Future’s loud-mouthed, sexually flagrant style. And he’s got an additional, crucial claim to fame: co-writing (or more aptly ghostwriting) Kreayshawn’s mega-virus “Gucci Gucci”. So why isn’t anyone paying attention?

Setting aside the fact that the sing-song raps on “Gucci Gucci” aren’t necessarily worth bragging about, it’s still a bit weird that Negrete hasn’t been able to share some of the limelight. He was obviously tight with Kreay (there are at least a few shots of him shaking his shaggy bearded self around in the “Gucci” video), and apparently before they met she didn’t even know what it meant to rap 16 bars. She’s even relocated from the Bay down to L.A. So why has Speak been so muffled when someone like V-Nasty has been so coddled?

For starters, true authorship of the song is a bit unclear. The dispute boiled over in an LA Weekly profile a couple weeks ago, when Negrete complained that while millions were mouthing his lyrics, he was stuck eating Spam for dinner. Kreayshawn sort of flip-flopped on the issue, admitting last Friday that, yeah, “he helped me write some of it."

It’s kind of a minor feud, but Negrete seems genuinely bent out of shape about being overlooked, and understandably so. And it’s not all about money; With the Internet adjusting itself in such volatile tides, a missed opportunity like that could be a devastating blow to his career. Supposedly he's had a rough go the past few years, dealing with depression and now the conflicted feelings that would most certainly follow a rapper forced to ghostwrite for major-label acts (like, most recently, No Doubt) to make ends meet.

Maybe now, with Odd Future behind him, he’s finally aligning himself with the right people, but it seems that no one gets their due unless they hop on the bandwagon and adopt one of the hyped-about tags; “OF,” “White Girl Mob,” or “ASAP” among them. 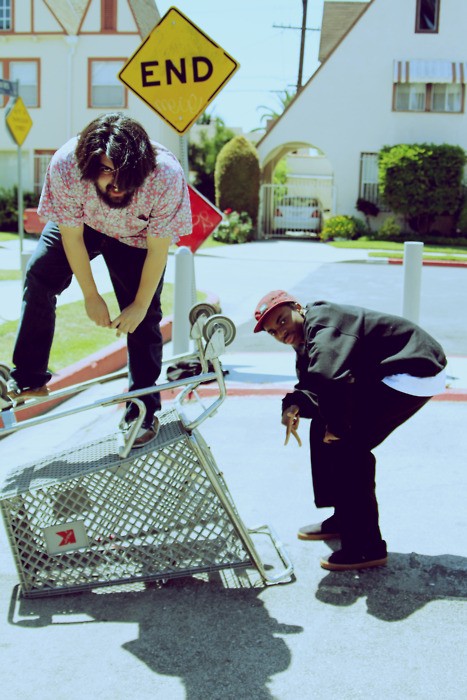 Speak’s confusion about his place in the rap world comes through on Inside Out Boy, which you can read reviewed in this week's (Nov. 23) Express. But Speak is also an example for those falling between the cracks of the rap Internet. Another one of his fellow rappers/friend Vince Staples dropped some great rap last week, too, but how he identifies is also up for question. He moves in the same circles and could probably take advantage of the Odd Future name if he really wanted to, especially after guesting on “epaR” with OF icon Earl Sweatshirt (one of their more violent, inflammatory early tracks). But Staples’ official word is that he has “no ties with Odd Future”. Shrugging off that kind of alliance may seem like a bold move, but perhaps it’s Staples' prerogative to forge his own path that’ll serve him well in the long run.

It’s easy to wonder if long-run success is a realistic goal anymore. Over Twitter last week, Speak bellyached, “6 months ago OF... 9 months ago Lil B.... 1 year ago Wiz... its a fucking joke. The net has made the art of music making disposable.” And these dudes certainly don't appear on the insane, exhaustive infographic put out by Spin Magazine to try and encapsulate the whole hip-hop universe. So how not to get used up and thrown away?

A few things seem obvious: ingenuity is rewarded, as is an intuitive use of social networks and the occasional transfixing viral video. Beyond that, what do young, talented hip-hop artists, armed with the resources to make and record music, need to do to make it? In our own backyard, Main Attrakionz have been putting out a whole bunch of good rap, under the makeshift Green Ova umbrella, but haven’t quite struck the critical chord to make their efforts a ringing success. For these rappers, fame is achieved at indiscriminate intervals, and the formula for catching recognition is becoming more and more convoluted.

Speak told LA Weekly, “When I put out my album, will the world care? Probably fucking not… It's depressing to have the world sing along to your every fucking word, and not care about you." Speak’s unique in that, as a rapper who’s got a decent amount to offer, he’s also one not afraid to be sort of thorny. Fussiness isn’t always a good quality, but his career soreness and his concern about the future of the industry seems warranted. Is there a place for consistently good rappers outside of a high-buzz/high-scrutiny atmosphere? Somewhere in between being a dejected ghostwriter and a one-song phenomenon?