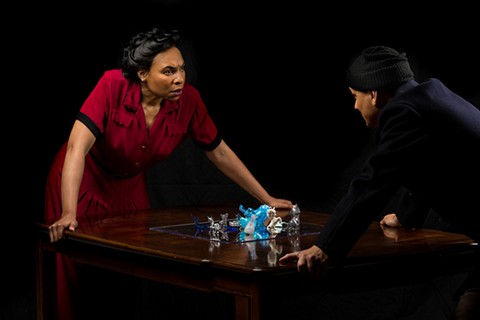 This weekend marks the California Shakespeare Theater’s final run of Tennessee Williams’ The Glass Menagerie. The semi-autobiographical work, which is Cal Shakes’ Williams debut, is a “memory play,” in which the writer protagonist, Tom Wingfield (Sean San José), recalls his erstwhile-debutante mother’s (Karen Aldridge) botched attempts to find a suitor (Rafael Jordan) for his withdrawn sister, Laura (Phoebe Fico), in Depression-era St. Louis. Where the play diverges from most previous productions is in its casting, which prominently features people of color and an actress with a disability in roles that typically go to white, able-bodied performers. “All of my work puts women or people of color or women of color at the center — it’s just part of my personal mission as a Latina director,” said Lisa Portes, the play’s director. Arrive at Cal Shakes’ outdoor amphitheater in the Orinda hills 45 minutes early for dramaturge-led Grove Talks about the play.