The Fresh Punk of SWMRS

The local genre-pushing group is on the rise in a big way. 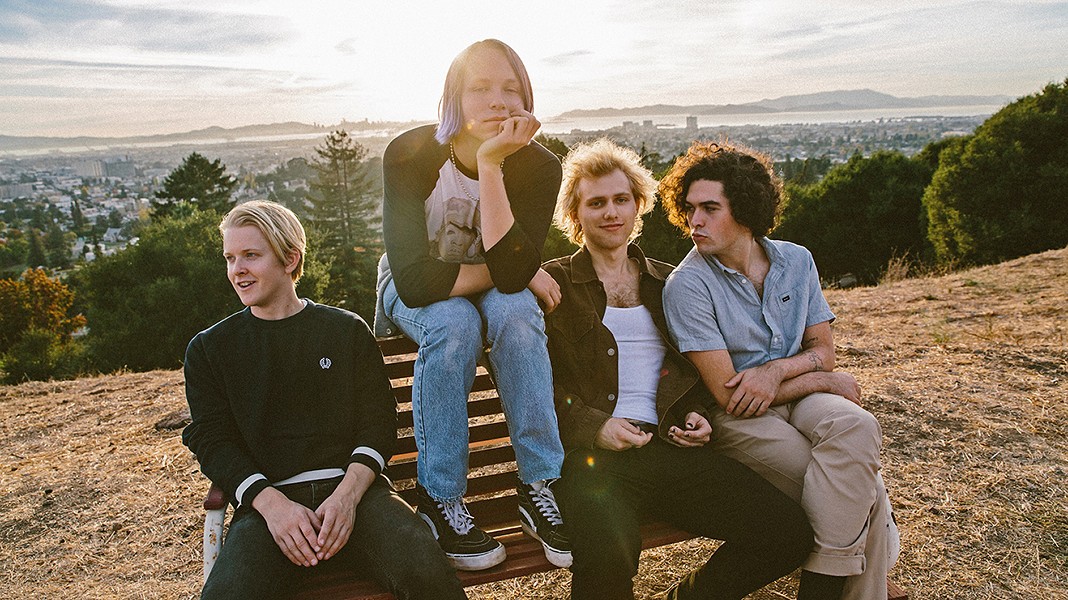 In 2015, Oakland punk band Emily's Army reemerged as SWMRS, releasing its debut record under the new moniker. One year later, that album got re-released by Fueled by Ramen, a major label with bands like Twenty One Pilots, Paramore, and Panic! at the Disco on its roster. For Cole Becker, SWMRS lead vocalist and rhythm guitarist, signing with a major label owned by Warner Music Group was daunting.

"It was a huge conflict. All of my favorite bands were fiercely independent or with indie labels," he said. "Making the jump was scary."

It had been a long time coming. Becker first started the band with Joey Armstrong, a high school buddy and drummer, after watching the movie School of Rock in 2004. Becker's older brother, Max, joined as lead guitarist. Eventually, Sebastian Mueller became SWMRS's bassist. But before that happened, the group changed its name a few times, and recorded two albums with Green Day frontman and Joey Armstrong's father, Billie Joe Armstrong. As Emily's Army, they had already toured the world, become Vans Warped Tour regulars, and launched their own label, Uncool Records — all the while pumping out songs and videos that strive to rip apart the expectations of punk rock.

"Playing with SWMRS feels like nothing else I've experienced," said Becker. "We push each other's buttons, but we also push each other as musicians. It's a dream we wake up to every day. We get to play music for people, and with each other — music that people like."

Which brings us to Drive North, the band's debut on Fueled by Ramen. Becker has been pleased to find people at the label "really love music and all they want is to make it easier for us to do what we're doing," he said. Support has come in the form of quicker vinyl pressing, managing the time-suck of merchandising, and a recent loan to cover flights for a tour through Europe.

Since giving up independent label status, Becker said it's essential to maintain the fan connections that make a punk rock band tick. SWMRS isn't about to become a commodity, he insisted. Performing live, writing songs about a time he says is "either the most exciting or the most terrifying, exhausting time to be alive" will remain central. What is exciting are the ways in which greater notoriety has allowed SWMRS to connect to fans — online and directly in concert halls and bars. What is terrifying is letting the gates down, writing songs that are more political, and being exposed to criticism that feels personal, especially online where anonymity increases the volatility.

"That tension dogs us," he said. "A friend said, 'Yeah, we don't live in a happy time. We had an upward trajectory and now, things don't feel like that.' That's hard. We take it on even more so because of social media. People venting in messages and stuff. Tweets and posts can really hurt."

Becker often gets ideas for songs when hiking, biking, or skating. He sings fragments into his phone's voice memos, later picking up the guitar to play along and decide which ideas to develop. With Drive North, he broke form. "I tried writing to keyboard. I'd play silly little keyboard beats and just write words to it."

"Lose It" isn't a song he wrote — the singable song with an earworm-worthy refrain was written by his older brother, Max — but it's his favorite to play live. "It gives us a moment where we make ourselves vulnerable to the crowd," Becker said. "It shows the melancholy part of being a teenager: the romantic part, the friend you're not friends with anymore. Being able to talk about a negative experience gives you a catharsis."

Catharsis arrives full throttle with "Harry Dean," a rebellious, hard-driving song also written by Max about a guy they used to see at every party they attended during high school. "We worked on that for so long. We wanted it to be less pop-funk rock, less niche, and kind of forgot our roots." Eventually, the song wound itself back to punk's loud, propulsive energy. "It was helpful to move outward, but then we realized we had a deep, deep love of punk. It renewed everything for us," he said.

"Miley" is unlike any song Becker will write in the future, he predicts. Not only is its heavy, down tempo and rhythm unusual, but the witty, less-jaded lyrics represent a mindset at a specific point in time: While writing an article about Miley Cyrus in college, he felt inspired by her independence. "You don't always see that with Disney stars. I wasn't necessarily agreeing with everything she did, but it was helpful to see her pursue her [artistic] arc," he said. The song is like a punk rock ballad; a quiet tribute punched with pauses and sudden outbursts of "Miley, you're a punk rock queen."

Becker's songwriting draws on disparate rock classifications (low-fi garage rock, pop-punk, pop, indie rock) — a multi-source aspect he attributes to the early imprint of a Greek musician, one of his dad's friends, who visits his family annually. He blends rembetika, underground Greek smoky-bar music from the early 1900s, with "every Beatles song, five songs he's written, and crazy arc storytelling," according to Becker. For Becker, telling stories drawn directly from his life makes them intensely personal but also representative of people his age, and therefore, universal. Wes Anderson films, which unite soundtrack and cinema in one narrative stroke, influence his music videos.

Despite the promising future of SWMRS, Becker prefers to stay present, as fractious and burdensome as it is. "There's no other cure [for fear] than music. Being allowed to be anxious. Being open in a crowd of people, through dance and music, it takes the whole weight off, for a brief moment," he said. "The weight wears you out every day, but when finally there's a space to feel something good, you see the most beautiful release of energy." 