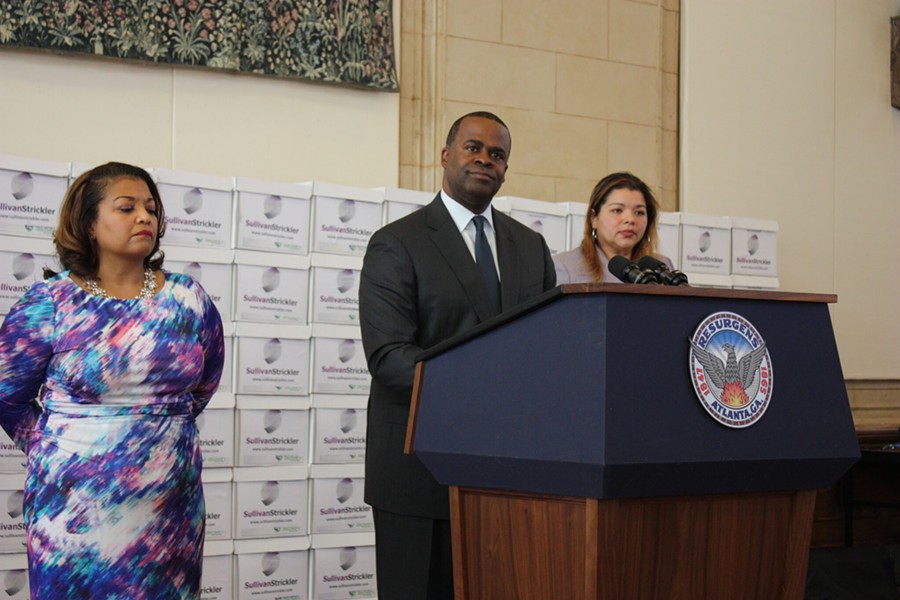 "Transparency theater" is the term we use to describe an empty gesture meant to look like an agency is embracing open government, when really it's meant to obfuscate. For example, an agency may dump an overwhelming number of documents and put them on display for cameras. But because there are so many records, the practice actually subverts transparency by making it extremely difficult to find the most relevant records in the haystack.

Such was the case with Atlanta Mayor Kasim Reed, who released 1.476 million documents about a corruption probe to show his office was supporting public accountability.

"The documents filled hundreds of white cardboard boxes, many stacked up waist high against walls and spread out over rows of tables in the cavernous old City Council chamber," Atlanta Journal-Constitution reporter Leon Stafford wrote. "Reed used some of the boxes as the backdrop for his remarks, creating a six-foot wall behind him."

Journalists began to dig through the documents and quickly discovered that many were blank pages or fully redacted, and in some cases the type was too small for anyone to read. AJC reporter J. Scott Trubey's hands became covered in papercut gore. Ultimately, the whole spectacle was a waste of trees: The records already existed in a digital format. It's just that a couple of hard drives on a desk don't make for a great photo op.

In the increasingly digital age, more and more routine office communication is occurring over mobile devices. With that in mind, transparency activist Phil Mocek filed a request for text messages (and other app communications) sent or received by now-former Seattle Mayor Ed Murray and many of his aides. The good news is the city at least partially complied. The weird news is that rather than seek the help of an IT professional to export the text messages, some staff simply plopped a cellphone onto a photocopier. Mocek tells EFF he's frustrated that the mayor's office refused to search their personal devices for relevant text messages. They argued that city policy forbids using personal phones for city business - and of course, no one would violate those rules. However, we'll concede that thwarting transparency is probably the least of the allegations against Murray, who resigned in September 2017 amid a child sex-abuse scandal.

Thirty years ago, the hair-rock band Winger released "Seventeen" - a song about young love that really hasn't withstood the test of time. Similarly, the FBI's claim that it would take 17 years to produce a series of records about civil rights-era surveillance also didn't withstand the judicial test of time.

As Politico reported, George Washington University professor and documentary filmmaker Nina Seavey asked for records about how the FBI spied on antiwar and civil rights activists in the 1960s and 1970s. The FBI claimed they would only process 500 pages a month, which would mean the full set of 110,000 pages wouldn't be complete until 2034.

Just as Winger's girlfriend's dad disapproved in the song, so did a federal judge, writing in her opinion: "The agency's desire for administrative convenience is simply not a valid justification for telling Professor Seavey that she must wait decades for the documents she needs to complete her work."

When Amazon announced last year it was seeking a home for its second headquarters, municipalities around the country rushed to put together proposals to lure the tech giant to their region. Knowing that, in Seattle, Amazon left a substantial footprint on a community (particularly around housing), transparency organizations like MuckRock and the Lucy Parsons Labs followed up with records requests for these cities' sales pitches.

More than 20 cities, such as Chula Vista, Calif., and Toledo, Ohio, produced the records - but other agencies, including Albuquerque, N.M., and Jacksonville, Fla., refused to turn over the documents. The excuses varied, but perhaps the worst response came from Maine's Midcoast Regional Redevelopment Authority. The agency did provide the records, but claimed that by opening an email containing 37 pages of documents, MuckRock had automatically agreed to pay an exorbitant $750 in "administrative and legal fees." Remind us to disable one-click ordering.

BuzzFeed reporter Jason Leopold has filed thousands of records requests over his career, but one redaction has become his all-time favorite. Leopold was curious whether CIA staff are assailed by the same stream of office announcements as every other workplace. So, he filed a FOIA request - and holy Hillenkoetter, do they. Deep in the document set was an announcement that "the breakfast burritos are back by popular demand," with a gigantic redaction covering half the page citing a personal privacy exemption. What are they hiding? Is Anthony Bourdain secretly a covert agent? Did David Petraeus demand extra guac? This could be the CIA's greatest Latin American mystery since Nicaraguan Contra drug-trafficking.