Government transparency laws like the Freedom of Information Act exist to enforce the public's right to inspect records so we can all figure out what the heck is being done in our name and with our tax dollars.

But when a public agency ignores, breaks or twists the law, your recourse varies by jurisdiction. In some states, when an official improperly responds to your public records request, you can appeal to a higher bureaucratic authority or seek help from an ombudsperson. In most states, you can take the dispute to court.

Public shaming and sarcasm, however, are tactics that can be applied anywhere.

The California-based news organization Reveal tweets photos of chickpeas or coffee beans to represent each day a FOIA response is overdue, and asks followers to guess how many there are. The alt weekly DigBoston has sent multiple birthday cakes and edible arrangements to local agencies on the 1-year anniversary of delayed public records requests. And here, at the Electronic Frontier Foundation, we give out The Foilies during Sunshine Week, an annual celebration of open-government advocacy.

In its fourth year, The Foilies recognizes the worst responses to records requests, outrageous efforts to stymie transparency and the most absurd redactions. These tongue-in-cheek pseudo-awards are hand-chosen by EFF's team based on nominations from fellow transparency advocates, participants in #FOIAFriday on Twitter, and, in some cases, our own personal experience.

If you haven't heard of us before, EFF is a nonprofit based in San Francisco that works on the local, national, and global level to defend and advance civil liberties as technology develops. As part of this work, we file scores of public records requests and take agencies like the U.S. Department of Justice, the Department of Homeland Security, and the Los Angeles Police Department to court to liberate information that belongs to the public.

Because shining a spotlight is sometimes the best the litigation strategy, we are pleased to announce the 2018 winners of The Foilies. 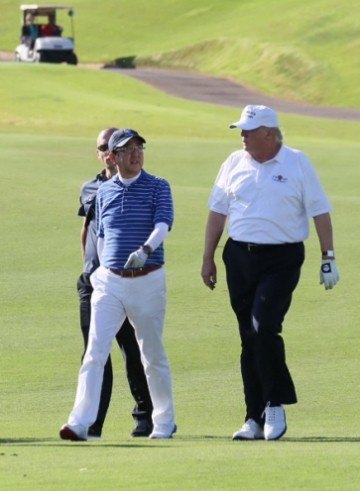 Since assuming the presidency, Donald Trump has skipped town more than 55 days to visit his Mar-a-Lago resort in Florida, according to sites like TrumpGolfCount.com and NBC's tracker. He calls it his "Winter White House," where he wines and dines and openly strategizes how to respond to North Korean ballistic missile tests with the Japanese prime minister for all his paid guests to see and post on Facebook. The fact that Trump's properties have become secondary offices and remain a source of income for his family raises significant questions about transparency, particularly if club membership comes with special access to the president. To hold the administration accountable, Citizens for Responsibility and Ethics in Washington filed a FOIA request for the visitor logs, but received little in response. CREW sued and, after taking another look, the Secret Service provided details about the Japanese leader's entourage. As Politico and others reported, the Secret Service ultimately admitted they're not actually keeping track. The same can't be said about Trump's golf score.

FOIA Fee of the Year - Texas Department of Criminal Justice

Sexual assault in prison is notoriously difficult to measure due to stigma, intimidation, and apathetic bureaucracy. Nevertheless, MuckRock reporter Nathanael King made a valiant effort to find out whatever he could about these investigations in Texas, a state once described by the Dallas Voice as the "Prison Rape Capital of the U.S." However, the numbers that the Texas Department of Criminal Justice came back with weren't quite what he was expecting. TDCJ demanded he fork over a whopping $1,132,024.30 before the agency would release 260,000 pages of records that it said would take 61,000 hours of staff time to process. That in itself may be an indicator of the scope of the problem. However, to the agency's credit, they pointed the reporter in the direction of other statistical records compiled to comply with the federal Prison Rape Elimination Act, which TDCJ provided for free.