The Firing of Captain Mark Gagan

The surprising dismissal of the well-liked Richmond police captain and a series of other scandals threaten to tarnish the reputation of a police department once held as a national model of reform. 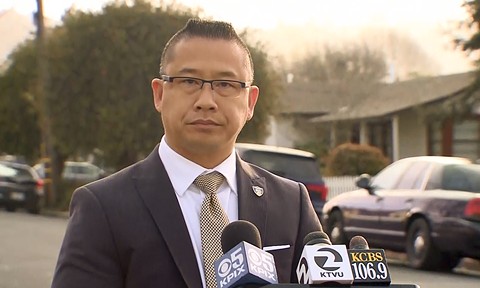 On Sept. 28, 2016, shortly after Brown submitted his final report on the scandal, Abuslin's attorneys, Pamela Price and Charles Bonner, filed a $30 million claim against Richmond citing 17 state and federal violations. In the claim, five high-ranking police officers were named by their initials, "A.H." (Lieutenant Andre Hill), "A.M." (Sergeant Armando Moreno), "M.R." (Sergeant Mike Rood, who had previous complaints for sexual misconduct), "J.T." (Officer Jerred Tong), and "F.T." The only officer on the police roster in 2016 with the initials "F.T." was Lieutenant Felix Tan, Brown's chief of staff and lead public information officer. Yet Brown had designated Tan the department's sole spokesperson about the Abuslin case.

According to Abuslin's attorneys, the five Richmond police officers exploited her for sex and encouraged her to remain in the sex trade. "After learning that [Abuslin] was a victim of sexual exploitation, the above referenced Richmond Police Department employees were obligated to protect her from trafficking, coercion and exploitation," the eight-page claim reads. "Instead they continued to exploit her by trading money, information and or protection for sex. Instead of helping [Abuslin] find a way out of exploitation, they furthered and deepened her spiral down into the sex trade."

The fact that Tan was the subject of investigation for his involvement with Abuslin should have been enough for Brown to remove him from being the sole source of public information about the case. But oddly, according to records obtained from the city's financial department, Brown instead sent Tan on three secret out-of-state trips with a girlfriend, Yvette Medina, who is also Brown's secretary.

The fact that Tan was the subject of investigation for his involvement with Abuslin should have been enough for Brown to remove him from being the sole source of public information about the case. tweet this

Ostensibly, Tan's three trips with Medina were to participate in Violence Reduction Network trainings. But despite numerous requests, the police department could not produce any work product from the three trips — no reports, presentations, or other form of tangible value to Richmond taxpayers who spent more than $5,000 on travel, accommodations, and meals for the couple in Dallas, Boston, and Kansas City. Receipts show that at the same time of scheduled Violence Reduction Network events, Tan and Medina were in taxi cabs or at restaurants. In addition, Tan, who earned $356,500 in 2016, according to Transparent California, also filed for 14.5 hours of overtime on two of the trips, which cost taxpayers an additional $1,624, without any explanation of how the money was earned.

Tan did not respond to calls and email requests for comment on this story.

The three trips were inexplicably kept secret within the police department. Against department policy, there are no records of the trips on the Personal and Training Order, a weekly log, maintained by Medina, of officers and staff who are not available. The trips also were not entered into the department's TeleStaff system, which tracks assignments, overtime, leave, and administrative training events, among other things.

Internal investigators sustained Abuslin's allegations against Tan and he received a chief's letter of reprimand, though the nature of the allegations remain confidential and Tan was not named in Abuslin's lawsuit against the city of Richmond.

Despite Tan's alleged involvement with Abuslin, he remained Richmond police's lead public information officer. Nonetheless, Tan's credibility was apparently beginning to thin, and during the coming months, it would fray.

Effectively running a police department of a mid-sized city is incredibly difficult. The measure of a well-run department is how its chief adjusts bad policies and disciplines officers who create problems, break the law, or fail to carry out their duties. Under Brown, there have been several high-profile cases in which the public was apparently misled to protect errant officers. In one case, officers may have been partly responsible for the death of a young Richmond mother.

On April 4, 2017, Rashanda Franklin started the day with her regular routine: The 29-year-old mother prepared her two sons, ages 5 and 8, for school. She secured them in their car seats, with their backpacks on their laps, in the back of her silver Jeep Wagoneer and headed for the New Direction Christian Academy on Rheem Avenue to drop them off before heading to cosmetology school.

As Franklin pulled into the academy parking lot, she saw her ex-boyfriend, Lawyer Dushaun McBride, 43, waiting for her. McBride had been stalking her for weeks and just a month before, had punched her to the ground at the academy while she was dropping her kids off, according to the Contra Costa County District Attorney's public case filings.

Franklin sped away from the academy and hit the Panic Button app on her cell phone. Terrified, she told the police dispatcher what was going on and gave updates on her location as she tried to evade McBride, who was following her in his car. But Franklin only managed to drive about a block or so before McBride cut her off. He got out of his car and the dispatcher heard Franklin plead with McBride, "The boys are in the car, the boys are in the car."

McBride said, "I'm not playing with you," and then the dispatcher heard a gunshot followed by silence and then the sound of the children screaming. The bullet had entered Franklin's left cheek and exited the right side of her neck. Franklin's two sons sat in their car seats holding their backpacks for more than a minute before a neighbor took them from the back of the Wagoneer and brought them to his home to wait for police.