The Fight to Clean Up Another Richmond Brownfield

Residents say a state proposal to clean up the toxic Zeneca site on the Richmond shoreline doesn't go far enough. 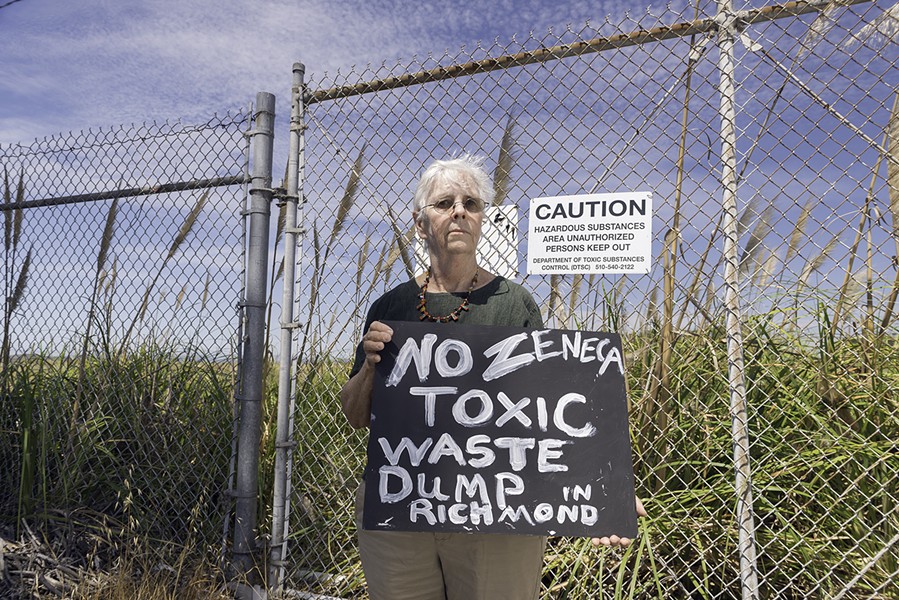 If you've walked your dog at Point Isabel, shopped at the Costco next door, or watched a great blue heron wade into the nearby Stege Marsh wetlands, you were right next to a toxic stew that has been the subject of controversy for decades.

Now, the California Department of Toxic Substances Control (DTSC) is proposing to continue to cap part of the 86-acre Zeneca site on the Richmond shoreline. But residents are concerned that the effort doesn't go far enough to protect the environment and human health.

Contamination of the site began in 1887, when the Stauffer Chemical Company began trucking in pyrite (fool's gold) from a Sierra mine, "roasting" it on-site to make sulfuric acid, and allowing the highly toxic cinders to pile up. By the 1950s, the company was manufacturing and storing pesticides and herbicides, allowing runoff to accumulate in "chemical ponds." By 1997, after multiple mergers, pharmaceutical giant AstraZeneca closed the site, and from 1999 to 2002, "cleanup" began. This included demolishing site structures, digging up toxic soil, mixing it with limestone to neutralize it, spreading it over 30 acres, and capping it with a thin concrete cap, which was intended to be temporary. In 2009, the DTSC fined Zeneca and the University of California for several violations related to the cleanup effort, and fined them $510,000 as part of a settlement agreement.

People began to get sick. Sherry Padgett, who owned a business nearby, developed multiple melanomas. Barbara Stauss said her husband worked in an office on the Zeneca site and used to walk around the area on his lunch hour. He developed cancer and died. Concerned residents didn't have the means to prove that these illnesses were connected to the "cleanup" and the toxins that remained, however. But Padgett and other Richmond residents formed the Richmond Southeast Shoreline Area Community Advisory Group (RSSA CAG) and began to agitate for a comprehensive cleanup. Fifteen years later, they're still at it.

The group has been battling with the San Francisco Bay Regional Water Quality Control Board and, now, the California Department of Toxic Substances Control, which assumed control of the cleanup effort in 2005. Stephen Linsley, chair of the RSSA CAG's toxics committee, is a chemist and former environmental compliance supervisor for the West County Wastewater District. He said there are hot spots remaining all over the site, containing more than 100 chemicals and toxic materials, including arsenic, barium, copper, lead, mercury, and volatile organic compounds. "There are toxic metals in the ground and the groundwater," he said. During a storm or an earthquake, these can migrate off-site, he said. The group also has concerns about radioactive materials.

Padgett, who won a Jefferson Award for community activism, resigned from the Richmond community group several years ago in frustration with the lack of cleanup progress. Eric Blum, who is now RSSA CAG's chair, said the DTSC hasn't been open to the group's requests for more comprehensive testing and doing a thorough remediation of the site. "The DTSC is accustomed to redeveloping brownfields to an industrial standard, and there is a lack of engagement in looking at other solutions," he said. "Their basic stance is 'leave it there and cap it,' leaving Richmond with a toxic legacy."

Ironically, Blum noted, the Richmond community group had lobbied for the DTSC to assume control of the cleanup after being dissatisfied with what they described as the Water Quality Board's inaction over a period of years. "We wanted [DTSC] to come in so we would have expertise that would advocate for a thorough cleanup," he said. "They think that is what they are doing. We do not."

At the Richmond City Council meeting on July 10, two DTSC representatives and Richard Mitchell, Richmond's Director of Planning and Building, presented the reasons behind the department's choice of proposing — out of nine possible options — only a partial cleanup. An email from a DTSC spokesperson stated, "DTSC believes that the proposed cleanup alternative is protective of human health and the environment, and will accommodate the land uses identified in the City of Richmond's Richmond Bay Specific Plan."

In an emailed statement, a spokesperson from AstraZeneca wrote, "The proposed cleanup and restoration plan is robust and will return the site to a condition that is protective of human health and the environment."

But during the open comments section of the Richmond City Council meeting, resident after resident approached the podium to disagree, saying the proposed remedial plan for the Zeneca site was unacceptable. One attendee carried a sign reading: "Zeneca: I thought this business was to cure illness, not cause it!"

The DTSC's current proposal would permanently remove only small portions of contaminated soil from the site. Some acreage would continue to be capped using building foundations and roads from future development. The rest of the contaminated soil would remain on-site. Little else would be done to further cleanup Stege Marsh, except for the injection of various chemicals and "monitoring of groundwater to confirm the effectiveness of source remediation," according to a DTSC presentation at the city council meeting.

Several Richmond city councilmembers questioned the DTSC's conclusions and proposal, which the DTSC says is based on nine criteria required by federal and state statutes, with cost being one of them. Councilmember Ada Recinos asked why one of the nine possible options — a complete site cleanup — was not being considered, since the cleanup is being funded by AstraZeneca. DTSC representative Janet Naito responded that this option, Alternative 6, was not chosen based on the potential impacts, noting that the department estimates 65,000 truck trips would be necessary to clear the site of 500,000 cubic yards of contaminated soil, "which also have to be put somewhere." Councilmember Jael Myrick pursued the question, saying the community had expressed its desire to have the area cleaned up to residential standards, meaning single-family housing could be built there. (The current proposal would clean up the site for mixed-use development, with residential housing only allowed above the first floor.) Councilmember Eduardo Martinez then asked, given that "community acceptance" is also one of the nine criteria, "If everyone during the public comment period wants Alternative 6, would that sway you?"

Mayor Tom Butt weighed in with the harshest criticism of the meeting. "My belief is that DTSC is not working for the people of California, but for the polluters," he said. "I have no confidence in the DTSC, and this reflects the opinions of people in Richmond."

All of this might have been unnecessary if UC Berkeley's ambitious plan to build a "global campus" on the current Berkeley Richmond Field Station site, which is adjacent to the Zeneca site and is included in the cleanup efforts, had not come to a screeching halt in 2016. First announced in 2012, the campus plan was touted as a model for city-university partnerships. It was a large part of the strategy for Richmond's 2013 South Shoreline Specific Plan, which envisioned the area as a "vibrant, mixed-use community" and would have required a comprehensive cleanup of the site. But in August 2016, UC Berkeley announced that, due to "budgetary challenges" and the fact that Chancellor Nicholas Dirks, who had spearheaded the effort, was stepping down, the entire proposal had been tabled.

Today, despite years of setbacks and hopes raised, then dashed, the Richmond Southeast Shoreline Area Community Advisory Group continues its fight for environmental justice. It's urging concerned citizens to attend the DTSC public hearing on Thursday, July 26, 6 p.m., at UC Berkeley's Richmond Field Station, 1301 S. 46th St., Room 445, Richmond. The group is also urging the DTSC to extend the public comment period for an additional 30 days. It currently ends August 10; comments can be sent to lynn.nakashima@dtsc.ca.gov.

According to the DTSC, the department will review all comments received from the public, provide written responses, and then determine what, if any, modifications will be made to the current proposal.

Blum said he still has hope that the DTSC will consider the more thorough option. "We hope the DTSC will reconsider its position and develop a comprehensive cleanup," he said. 

Editor's note: We misspelled Barbara Stauss' name. This version has been corrected.