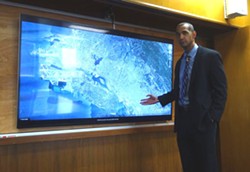 This morning the Oakland Police Department held a second screening of officer body camera video clips from two recent fatal incidents: the death of Richard Linyard on July 19, and the death of Nathaniel Wilks on August 12.

OPD spokesperson Johnna Watson said earlier week that Police Chief Sean Whent had asked her to invite the Express to the earlier showing of the video to select journalists, but that she had neglected to do so. As a result, OPD offered the second viewing this morning to me.

I was shown footage taken from two officers who were in pursuit of Nathaniel Wilks, and two other officers who were in pursuit of Richard Linyard. The video clips were segments of much longer body camera videos that have not been released or shown to anyone outside of OPD in their entirety. The video clips represent a small amount of the total video footage in OPD’s possession related to each incident. OPD has declined multiple Public Records Act requests to release video footage of both incidents.

Nathaniel Wilks was shot by several OPD officers on August 12 in West Oakland. The shooting led to several protests and increased tension between OPD and the community.

“On the 6900 block of International [Boulevard], at approximately 2:40 pm officers saw a white Dodge Charger that had plates associated with an armed 211 [robbery],” Lieutenant Roland Holmgren said today, describing the moments leading up to the video footage viewed by the Express. According to Holmgren, a police unit briefly followed the vehicle, which Wilks is believed to have been driving. The vehicle was then spotted by OPD’s helicopter near San Leandro Boulevard in Oakland. The helicopter followed the car for about fourteen minutes as it drove across the city heading west. “At 27th [Street] and Northgate [Avenue] it collided with another [civilian] vehicle,” said Holmgren who used an aerial map to describe the pursuit.

According to Holmgren, OPD’s helicopter unit observed a person, believed to be Wilks, now on foot, who was trying to get into another motorist's car. Officers quickly arrived on scene and chased Wilks on foot, west on 27th Street, and then south on Martin Luther King, Jr. way.

“As he’s running, officers could see that he was in possession of gun,” stated Holmgren.

Holmgren said all officers activated their body cameras when they exited their vehicles to chase Wilks on foot.

The Express was shown video clips extracted from two different officers’ body cameras. None of the footage showed the alleged car-jacking attempt by Wilks.

The footage, which is extremely choppy and difficult to follow, shows a man running west on 27th Street as officers yell for him to stop. He turns south on Martin Luther King, Jr. Way and runs onto the sidewalk of the western side of the street. At this point in the video, which appeared to be unedited and uncut, officers can be heard yelling at the man to “drop the gun.” The video footage shows at least three OPD officers in pursuit on foot. Wilks is holding an object in his hand that is shaped like a gun.

At no point in the footage shown to the Express does Mr. Wilks aim a gun at officers or bystanders. In one of the video clips taken from the body camera of the officer pursuing Wilks on the sidewalk, a small dark object is briefly visible in his hand. In a second video clip, taken from the body camera of another officer who was running in the street parallel to Wilks, the object is visible briefly, and is shaped like a pistol.

Holmgren pointed to moments in the video in which the apparent pistol that Wilks was holding “flashes,” or “masks” the pursing officers, meaning that as Wilks was running, the barrel incidentally pointed toward the officers.

Based solely on the footage shown to the Express, OPD officers appear to have been involved in a dangerous situation in the Wilks case and there was no evidence that they engaged in misconduct.

The video appears to show that Mr. Wilks was surrounded on the sidewalk. One officer was following him close behind, running southbound on the sidewalk, while at least two other OPD officers were in the street running parallel to Wilks. From the two video clips, it also appears that several Alameda County sheriffs deputies were just south of Mr. Wilks, either on the sidewalk, or in the street. In both body camera clips, Wilks suddenly stops on the sidewalk, turns around, and runs in the direction of a doorway of a building. Officers all the while are yelling “drop the gun.” Suddenly multiple gun shots ring out, and Wilks falls. Holmgren said only OPD officers fired their weapons.

At the end of one of the video clips — which appears to have been uncut — multiple OPD officers and sheriffs deputies surround Wilks’ body. A black pistol is visible next to Mr. Wilks’ head, and officers can be heard asking where the gun is as they move in on his motionless body.

Holmgren said the video clips are a portion of the video evidence currently in OPD’s possession. OPD is also in possession of surveillance video recorded by nearby businesses.

According to Holmgren, Richard Linyard was pulled over for a traffic infraction on July 19 while driving on the 1300 block of 65th Avenue. Linyard exited his vehicle and was standing on the sidewalk while officers ran Mr. Linyard’s identification for outstanding warrants. OPD dispatch notified the officers on scene that Linyard had several felony warrants for his arrest, said Holmgren. The warrants, according to Holmgren, were for non-violent offenses.

The video clip shows that when one officer returned to the spot where Linyard and a second officer were waiting, and began to order Linyard to submit to arrest, Linyard took off running. Linyard, who was wearing slippers, ran barefoot northbound on 65th Avenue with at least one officer close behind him. Linyard turned into the driveway of an apartment complex and sprinted toward the back. The officer, not far behind, yelled, “I’m gonna Tase you,” but Linyard scaled a wooden fence and disappeared.

According to Holmgren, other officers were quickly on scene, and they surrounded the block to create a perimeter before a more thorough search was conducted. Based on the video clip, the pursuing officer did not follow Linyard over the fence.

A second video clip from a different officer showed part of the search for Linyard, which according to Holmgren, took approximately 24 minutes. According to Holmgren, there were as many as eight officers on the scene. Several established a perimeter, while the others, on the ground and on the rooftops of buildings, with their guns drawn, searched for Linyard. At one point in the video clip from one police officer’s body camera, several officers on the roof of an automotive repair shop spotted Linyard in a dark narrow space between two buildings.

“Get your hands up!” one officer ordered.

“I got the Taser,” said another officer off camera, apparently to Linyard.

“He’s not moving,” said another officer’s voice off camera.

A second police officer’s body camera footage showed some of what occurred on the ground, where several officers were attempting to reach Linyard. In the video they tear down a wooden fence blocking access to the crawl space. Linyard is briefly visible in the video clip in an upright position between the buildings. One officer then reached into the space, and after a few seconds pulled Linyard out. The short clip, which did not appear to be edited or cut at any point, showed the officers removing Linyard from the space. Linyard appeared to be unconscious. The officers immediately called for a medical team, and one officer began CPR.

The video clip taken from the officer conducting CPR on Linyard is choppy and jumps around, and it was difficult to get a good view of Linyard’s face and body. None of the video footage shown by OPD gives any indication of when and how Linyard ended up in the space between the buildings.

After showing the footage to the Express, Holmgren and Officer Johnna Watson said that the department’s decision to let select members of the media view the video evidence is part of an effort to dispel factually incorrect statements and rumors spread on social media about the deaths of both men. Holmgren said the department will also be screening video footage from police-related deaths to family members of the deceased as part of a new effort to be more transparent.

Yesterday OPD denied a Public Records Act request to release the same video clips it has already shown to members of the media to the broader public. OPD claimed in their response to the request that the clips are exempt from disclosure because they are evidence in ongoing investigations.

“It’s a balancing act to preserve the integrity of the investigation, but at the same time there’s a need to get information out to the public if we can,” said Holmgren.