Towing companies are taking cars illegally, and it's costing people. One of the worst offenders is PPI Towing of Oakland. 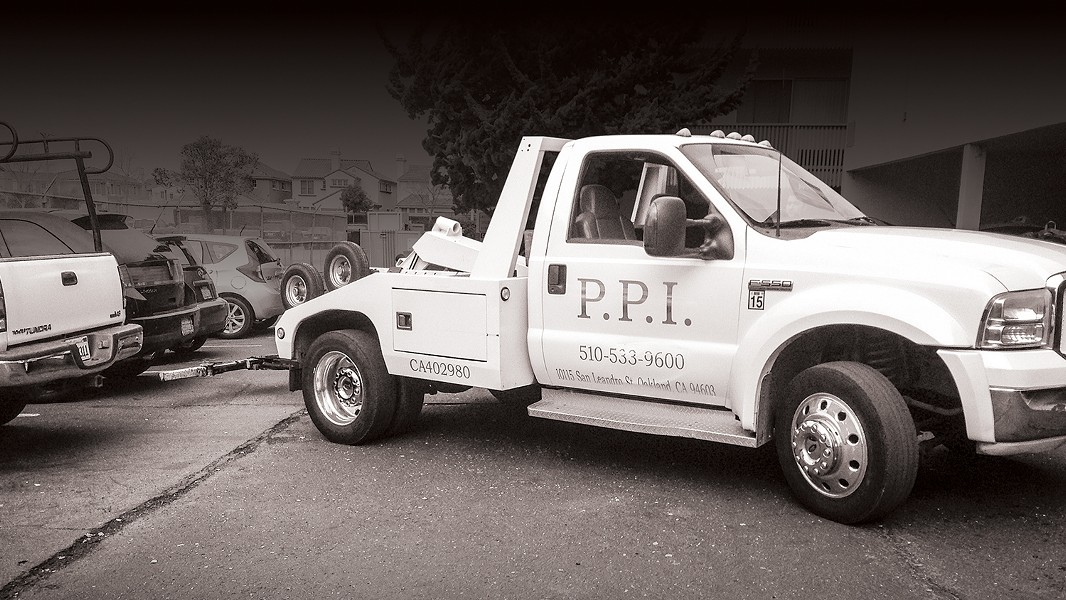 "I feel sorry because everybody doesn't have $400 on hand," Jones told the Express. "Now that I'm aware of the color of their trucks and the name of their trucks, I see them towing people all the time."


PPI's Yelp page features nearly 30 1-star reviews of the company, with many users commenting that they believe their cars were illegally towed. But the Yelp page also shows PPI's trucks operating with two distinct MCP identification numbers: one registered to the company and another to it its owner, Russo. However, an Express search of state DMV's active MCP registry found neither identification number, indicating that the company is operating illegally.

But PPI is not the only company to do so. The Express identified 42 towing companies operating in the East Bay, from San Leandro to Richmond, and found that 19 of them were not listed as active motor carriers with the DMV, as of mid-October.

Identifying these companies was a multi-step process. Using a database operated by the federal Department of Transportation, the Express found DOT numbers for the towing businesses and then entered those numbers into a California Highway Patrol database for the towing company's state-based MCP identification number. The Express then used that number, in addition to business names, owners' names, and phone numbers, to search for active permits in the DMV's MCP database.

When the Express contacted towing companies that appeared to be operating illegally, the answers varied. Dispatchers and operators for several companies simply hung up when questioned. Others, such as Affordable Towing in Oakland and Vasquez Towing in San Pablo, said that it must have been a mistake by the DMV and that they had filed their annual renewal, but could not remember when.

At least six of the towing companies that appeared to be operating without active MCPs were connected to 24 Hour Towing, which is located at 616 Derby Ave. in Oakland and also does not appear to have an active MCP.

All six of the companies have similarly designed websites, and photos submitted by Yelp users clearly show 24 Hour Towing trucks picking up vehicles. Calls to the various companies were routed to a call center for 24 Hour Towing, where several dispatchers and representatives declined to comment on the company's inactive MCP or its association to the other businesses.

When approached for comment and further details regarding the oversight of towing companies, a spokesperson for the DMV directed inquiries to the CHP, which they said was responsible for "all enforcement activities."

Monica Christopher, who oversees site inspections for the CHP's Golden Gate Division Motor Carrier Safety Unit, said that companies operating with inactive MCPs present regulation challenges because the law enforcement agency can't track the liability and workers compensation insurance that is required by law. Aside from it being illegal, it's also unfair to legitimate businesses that pay all of the required permit and licensing fees, Christopher said.

If a tow truck, or other motor carrier, is operating without a permit and encountered by a CHP officer on the road, the officer can impound the vehicle, which has happened several times in the last few months, Christopher added. But if a towing company doesn't cross paths with law enforcement, she said, the CHP's computer system is not set up to identify businesses that operate with expired MCPs.

In February 2017, the Alameda County District Attorney's office brought felony charges against Eric Courtney Corey and Douglas K Hiram for illegally towing vehicles from the 1300 block of 5th Street in Oakland, as a result of a complaint. Corey owned ACT Towing, which was based in Oakland.

One of the cars they towed belonged to Matthew Foley, a deputy district attorney who is listed as one of the plaintiffs in the criminal case. After Foley's car was towed on the Dec. 4, 2015, six other plaintiffs alleged that their cars were illegally towed in the subsequent days.

According to court records, Corey demanded $390 to release the cars, which were parked in proximity to the Red Star Housing complex that it had a general authorization agreement with. A judge ordered Corey and Hiram to refund six of the plaintiffs more than $3,500 in restitution, along with any other victims who come forward until next July who can prove they were towed between October 2017 and March 2016.

Teresa Drenick, spokesperson for the DA's office, said the investigation was by the office's consumer division, which currently also has an open investigation into PPI.

In other instances, though, towing companies and operators work in conjunction with law enforcement.


In July 2016, Auto Plus Towing began its 5-year contract with the city of Oakland to provide vehicle removal services for the Oakland Police Department. APT was the only bidder, and, in exchange for contracting with the city, agreed to pay an annual $172,000 fee, as well as a $54 referral fee per car.

APT replaced B&B Vehicle Processing, which had been granted consecutive 5-year contracts with the city since 1979 without a competitive bidding process. When a 2014 Alameda Grand Jury investigated the city's tow contract oversight, it found that "OPD lacks sufficient oversight and well-defined policies concerning the towing of vehicles and, as a right, the rights of vehicle owners may not be adequately protected."