The Dinosaur That Wouldn't Die

California already has the technology to convert to 100-percent renewable energy. But fossil fuel companies, utilities, and state regulators are still trying to keep an old, dirty industry alive. 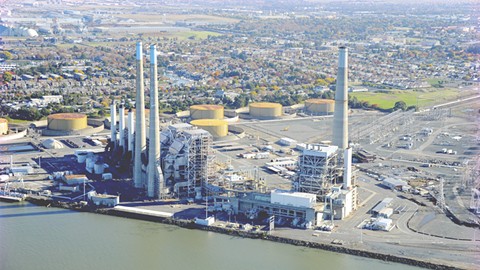 A chilly wind gusts off the lower Sacramento-San Joaquin River Delta, flowing over a landscape that modulates awkwardly between middle-class suburbia, scattered acres of tall grasses, and imposing industrial lots of warehouses and train tracks. This shoreline region, just north of the East Bay cities of Pittsburg and Antioch, is home to a Dow Chemical facility, a sheet metal factory, a recycling center, several yacht clubs, and a wastewater treatment plant.

The neighborhood is also a hub of natural-gas-fueled power generation. Over a distance of just six miles, the smokestacks of four gas-fired power plants spew climate-changing carbon dioxide into the atmosphere while generating some 4,000 megawatts of electricity. Two of the plants went online just five years ago, and another in 2009. Yet another, the Delta Energy Center in Pittsburg — the Bay Area's largest power plant — reopened in February after it closed last year following an explosion.

The recent statewide surge in natural-gas-power production has come at a time when California is supposed to be phasing out fossil fuels and has adopted landmark legislation laws and regulations designed to radically reduce greenhouse-gas emissions. The new power plants, as a result, have angered community leaders, environmentalists, and clean energy advocates who say the facilities are producing energy we don't need. "California, with its aggressive greenhouse gas reduction mandates, needs to be moving away from fossil fuel power plants, not building more," said Jonathan Evans, an Oakland-based senior attorney with the conservation group Center for Biological Diversity.

California is known as a global climate leader in large part because it has set formal goals to reduce its carbon emissions to 50 percent below 1990 levels by 2040. The state also aims to produce 50 percent of its electricity from renewable sources by 2030 — a milestone that California is more than halfway toward reaching. Getting there, Evans said, "is only possible by replacing fossil fuel energy with renewables," especially solar power, the fastest-growing renewable sector.

Growing in tandem with solar is battery-storage technology. It allows electricity produced by turbines when the wind blows and by solar panels when the sun shines to be used after the sun sets or the wind dies. Storage is critical to taking renewable energy mainstream.

And because of advances in battery-storage systems and a reduction in the costs of solar production, California should be moving rapidly to completely abandon fossil fuels, said Evan Gillespie, director of the Sierra Club's Beyond Coal Campaign. "It's very possible to get to 100-percent renewable energy," he said. "And we have the technology to get there today."

But power companies continue to wield considerable influence in the state. They have successfully thwarted efforts to convert quickly to 100-percent renewable and have pushed instead for more gas-fired plants. And the overseers of the state's energy supplies — the California Public Utilities Commission and the California Energy Commission — have complied, approving two large fossil-fuel projects in Southern California in 2017 and another in 2015.

And these plants, which cost hundreds of millions of dollars to build, have contributed to an unneeded glut of energy, which Californians are subsidizing through some of the highest electricity bills in the country, consumer advocates note.

"California ratepayers are going to be stuck for decades with a huge bill that I think will negatively impact California's economy — all for power we don't need," said Loretta Lynch, former president of the California Public Utilities Commission and now a vocal critic of what she considers to be a corrupt relationship between power companies and the state officials who are supposed to regulate them.

But Robert Weisenmiller, chair of the California Energy Commission, which oversees environmental reviews of power plants, contends that conventional power plants are still necessary because they help provide reliability that renewable sources alone often can't deliver. "The intermittent nature of solar and wind requires more nimble generation, which currently comes from natural gas-fired power plants," he wrote in an email to the Express.

"California, with its aggressive greenhouse gas reduction mandates, needs to be moving away from fossil fuel power plants, not building more." tweet this

But the fossil-fuel industry hasn't only pushed for more power plants. It has directly opposed or obstructed the development of renewable energy, especially rooftop solar systems. Because residential and business solar production means cash losses for utilities, industry representatives have aggressively lobbied both lawmakers and appointed officials to adjust regulations or otherwise take action to stifle the growth of solar and wind projects. In response, some states have actually abandoned programs that support private solar production.

Renewable energy advocates, however, have been fighting back, and many express hope that the fossil-fuel power's days are numbered. Currently, about 4 million Californians receive electricity from localized, independent providers called community choice agencies that focus heavily on renewable energy sources. In Alameda County, East Bay Community Energy is launching in June, and right off the bat, will be serving 600,000 new accounts, according to the agency's CEO Nick Chaset. "We're part of a developing system that aims to take back the grid now controlled by investor-owned utilities," Chaset said.

In addition, state regulators earlier this year approved a plan designed to wean the state's major utilities — including PG&E — off of fossil fuels in the years ahead and to invest more in renewables and battery storage.

Lynch believes solar power will be a dominant source of electricity in the future, but she says energy regulators and the industries they serve won't make it easy. "The question is just how many bumps in the road will be placed in our way before we finally get there," she said. "How much money will we waste as a society before the state gets serious about renewables?"