The Cook and Her Farmer Softly Opens Tomorrow

The inspections are passed, the beer and wine license is in, and the oysters are on the way: After a months-long buildout, The Cook and Her Farmer (907 Washington St., Oakland), the newest arrival at Swan’s Marketplace in Old Oakland, will softly open on Friday, May 16.

Co-owner Romney Steele, the “cook” in the name of the restaurant, has described The Cook and Her Farmer as an oyster bar that has roots in both the South and in Northern California’s local-and-seasonal-sourcing tradition. The menu will include, yes, plenty of oysters (shipped in fresh from Tomales Bay), but also things like gumbo and po’boy sandwiches. It’ll be a casual place, where customers order at the counter and then seat themselves in the market's communal dining area.

This Friday and Saturday, The Cook and Her Farmer will open from 9 a.m. to noon with De La Paz coffee service and house-made scones. Then, starting at 5 p.m., dinner will be served, “pop-up” style. Friday’s menu will be short and sweet: raw oysters on the half-shell, hand-cut French fries, a grilled cheese sandwich, and house-made pickles.

Meanwhile, the restaurant’s official opening day will be on Wednesday, May 21. To start out, Steele will serve lunch, Monday through Saturday from 11:30 a.m. to 3 p.m., with dinner pop-ups on Fridays and Saturdays only. The full lunch menu will include two salads (including a chopped salad that will vary from day to day), one or two sandwiches (including a fried-oyster po’boy as an occasional special), a grilled flatbread, and a pickle plate. Dinners will feature larger shared plates — things like gumbo and fried catfish. And the restaurant will offer three beers on tap (including Linden Street Brewery’s Hop Candi), plus a carefully selected list of California wines. 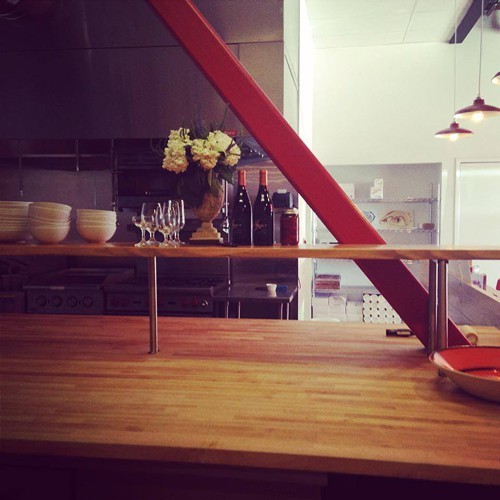 All that said, the menu is very much a work in progress. Because the temporary construction walls that were put up while the build-out was taking place won’t be torn down until later tonight, Steele said she hasn’t even seen what her restaurant will look like within the context of the broader market — “I haven’t chopped one thing in here yet,” she said.

It won’t be long now before she starts.