It was the year of the woman. 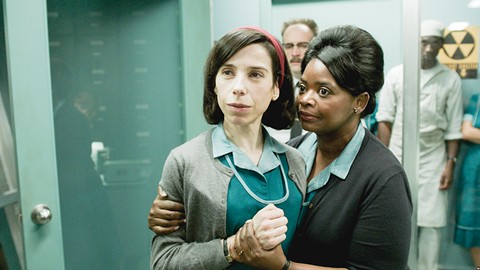 Entertainment-biz experts and film industry analysts have been tearing their hair out for the past 12 months because of poor business. Box office receipts, particularly during the summer tent pole season, were exceptionally anemic. "Surefire hits" weren't. People simply aren't going to the movies like they did before, and with an array of competing platform choices at their disposal, audiences stayed away from sticky-floored mall multiplexes by the thousands.

Short of admitting that too much big-studio product consists of stale sequels and carelessly conceived star vehicles, observers have blamed everything from the weather to Rotten Tomatoes for the light turnout. No genre is safe: Comedy, horror, fantasies, action, and romances have underperformed compared to past years. But don't despair. While box-office numbers are generally lousy, that doesn't necessarily mean that fresh ideas have evaporated, nor that enterprising filmmakers are not finding new ways to tell unique stories.

Pay no attention to what the commentators say, nor what real-life political thorns intrude into our lives as we sit in dark rooms dreaming about galaxies far, far away. 2017 at the movies has been one of the most dynamic periods in recent memory, a true bumper crop year for exciting films bearing a remarkable number of important cultural through-lines. Here, then, is a clutch of reasons to be encouraged about the future of cinema, the Ten Best Movies of 2017 (in no special order):

The Shape of Water

(The number eight spot pairs two different documentaries focusing on the same subject: The 1992 "Rodney King Riots" in Los Angeles. Both docs are excellent and deserve to be discussed together, so this year's Ten Best comes with a bonus choice.)

It's tempting to draw parallels between the lackadaisical popularity of theatrical movies in general and the rise of streaming, cable TV, and other video platforms. A multiplicity of viewing options is replacing the quaint old movie house, and even the basic idea of screened entertainment is open to question. It's a brave new world. The robots are now among us, and we'll have to learn how to live with them. However, familiar stories about human beings, their lives, and their feelings are still available to work their tenuous magic. For now. We just have to know where to look.

There's a strong case for labeling the past 12 months the Year of the Woman. Six of our 11 choices feature strong female protagonists. (And although it didn't make our list, Wonder Woman was one of the year's successes, breaking several box-office records, including the highest-grossing opening weekend for a female director.) The award-bait performances by Sally Hawkins (The Shape of Water), Saoirse Ronan (Lady Bird), Frances McDormand (Three Billboards Outside Ebbing, Missouri), Daniela Vega (A Fantastic Woman), and juvenile ball of fire Brooklynn Prince (The Florida Project) are only half the story. Each of these five films — I reviewed all of them except A Fantastic Woman in earlier editions of the Express — reflects its reality from a female point of view.

McDormand's combative Mildred Hayes from Three Billboards is probably the easiest to relate to, despite the inner pain she flaunts. Her daughter was raped and murdered, and no one else in her small town seems to care. So, she decides to take care of it herself. Writer-director Martin McDonagh, the UK-moveover who made In Bruges, hits a career high with this clockwork crime yarn, backed by superlative role-playing from McDormand, Sam Rockwell (as Ebbing's nastiest police officer), Woody Harrelson, John Hawkes, Caleb Landry Jones, and Peter Dinklage. McDormand has a specialty in take-charge small-town women ever since Fargo, and she gives the avenging Mildred one of her very finest sendoffs. Filmmaker McDonagh appears to be hitting his stride, as does actor Rockwell. McDormand and Harrelson, of course, have been in their rarefied character grooves for quite some time.

Fantasy maestro Guillermo del Toro has always had a sentimental streak in him, all the way back to his Mexican-produced Cronos (1993). But The Shape of Water is more than sentimental; it's a full-out love story, between a lowly cleaning woman (Hawkins) and the pitiful-but-terrifying amphibious being (played by actor Doug Jones) she meets at the research lab where she works. Hawkins' mousy Elisa Esposito, who masturbates in her morning bath while dreaming of romance, is a natural distillation of other Hawkins roles, in Mike Leigh's Happy Go Lucky and Aisling Walsh's Maudie (another of this year's most interesting pics). She's the wallflower with hidden reserves of passion. Add to that a resolute sense of justice in the face of Michael Shannon's hideous Strickland, who prods and tortures the Amphibious Man in order to serve his military masters. Scary and sweet, with a tenderness only a master of grotesquery could produce.

Lady Bird represents the flowering of two of the movies' brightest talents, actress-turned-filmmaker Greta Gerwig (Frances Ha) and Irish international actress Saoirse Ronan (Brooklyn). The scene is Sacramento in the '90s, where teenager Christine "Lady Bird" McPherson is in the final stages of living at home with her nagging mother (Laurie Metcalf, in another brilliant turn) and navigating Catholic high school. Next year is the year Lady Bird hopes to make her big break for the East Coast. But first she conducts experiments with love and self-fulfillment — the full coming-of-age package, equipped with Gerwig's spirited dialogue and Ronan's melancholy yet willful yearning. Gerwig will undoubtedly go on to act, write, and direct other films with her trademark wised-up wistfulness, and Ronan is already on her way to becoming the Millennials' Meryl Streep, but we'll always have Lady Bird to remind us what it looks like to catch lightning in a bottle.