The Battle of Algiers Still Thrills 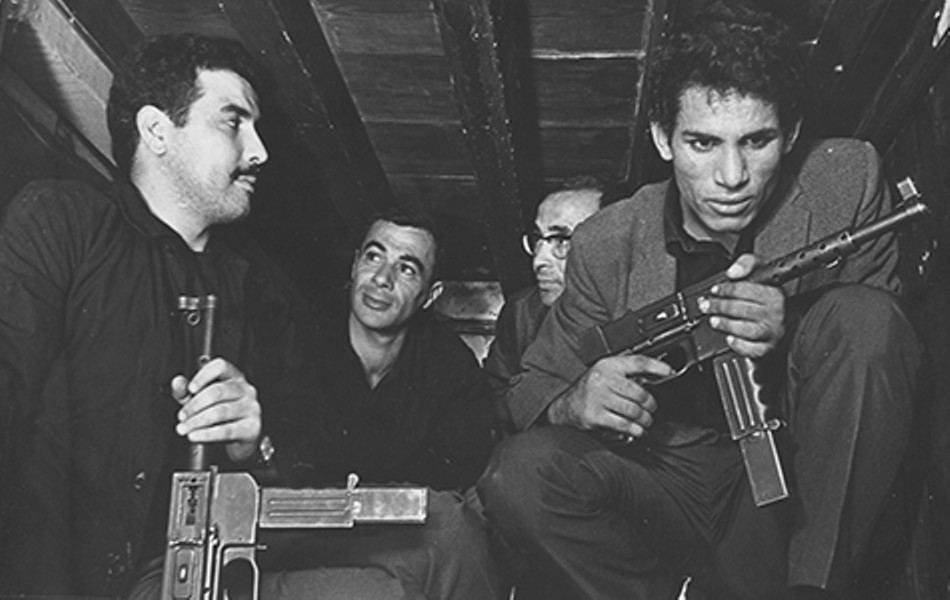 Saadi Yacef (second from left) and Brahim Haggiag (right) in The Battle of Algiers.

Saadi Yacef (second from left) and Brahim Haggiag (right) in The Battle of Algiers.

The Battle of Algiers
Directed by Gillo Pontecorvo. With Brahim Haggiag and Jean Martin. Opens Friday.

Fifty years after its first run, The Battle of Algiers is still a cinematic stick of dynamite. Director Gillo Pontecorvo's 1966 dramatization of the revolution for Algerian independence zeroes in on the struggle against the French colonial apparatus in the capital, Algiers. Concocted in collaboration with Marxist screenwriter Franco Solinas (State of Siege), Pontecorvo's scenario jettisons most of the prevailing "epic" movie devices of its day in favor of an ultra-realistic, street-level, collective portrait — no single protagonist, no movie stars, no love story, absolutely no "against-the-background-of."

Instead of Marlon Brando we get a cast of non-actors, including Brahim Haggiag as the hustler-turned-revolutionary Ali La Pointe, and Mohamed Ben Kassen as Omar the street kid. The only professional actor is Jean Martin, who portrays the French military commander Colonel Mathieu as a cool, calculating pragmatist rather than a bloodthirsty racist. Battle's screenplay was inspired by the writings of Saadi Yacef, the real-life leader of the FLN, who essentially plays himself in the film, radiating fearlessness from every pore in his face.

Pontecorvo insisted on using intentionally grainy-looking black-and-white film (often shot hand-held by cinematographer Marcello Gatti) and jumpy editing (by Mario Morra and Mario Serandrei) to create the documentary look of a newsreel. Combined with the casbah locations, Ennio Morricone's indelible music, and the director's knack for crowd scenes, the 4K digital restoration leaps from the screen with an urgency that still thrills today, after decades of violent spectacles.

Despite being banned by the French government, Battle was a box-office hit with both Algerian and western audiences in its original release. For lifelong leftist Pontecorvo (1919-2006), it's the crowning achievement in a career that produced an explosive handful of agit-prop entertainments, à la Burn, Kapó, and the rarely seen 1979 saga of Basque separatists in Spain, Ogro. Pontecorvo's films, exciting as they are, reflect a very different time than 2016. People who carry bombs into cafés or marketplaces are no longer considered heroes in Rome or Hollywood — they're more likely to be considered pure terrorists, whatever their political objectives. With that in mind, a cynic might call The Battle of Algiers an exercise in romantic nostalgia. Someone else might call it the bravest film he's ever seen.