Cute, quirky Dutch girl. Has own accordion. Looking for love and approval. Will travel. 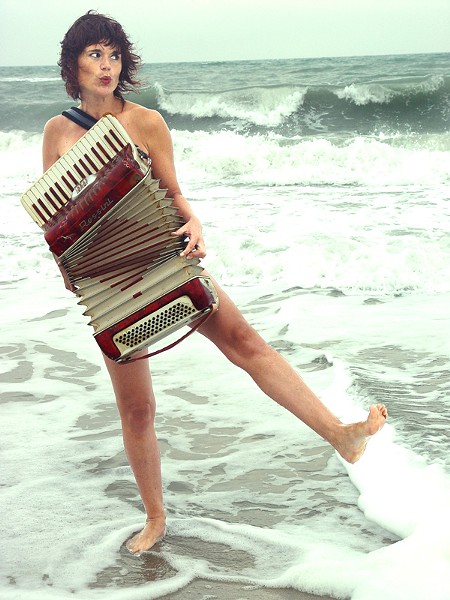 Such sexy-cute whimsicality is definitely what Jet Black Pearl (Jetti Swart) is going for. Her cabaret at The Marsh Berkeley, called Sex, Slugs & Accordion, is a sometimes endearing but strained stab at adorability.

Jet Black Pearl is, in fact, Miss December in the 2013 "Accordion Babes Pin-Up Calendar." Which, it turns out, exists. Apparently, hot accordion-playing females have their own cult following.

A Dutch performer who sings in French, English, and Dutch, Swart is performing weekly (and kinda weakly) at The Marsh Cabaret on Allston Way. She is so likeable and eager to please that one wants to like her — and please her with our delight in what she's peddling.

What's she peddling is her eccentricity. Swart plays the accordion, the toy piano, the thumb piano, and a loop pedal. Using this pedal, she instantaneously records herself and plays it back to accompany herself with a range of truly inventive mouth sounds.

Often singing solely in French, Jet Black Pearl adapts a chanteuse persona and an Edith Piaf allure. I'm not sure what she was singing but it's definitely about l'amour. She said one song was about hot, tender, French romance — the kind that doesn't last.

But Swart also creates a musical genre all her own with her kooky, accordion-enhanced beat-boxing. While Swart has a range of international influences, this beat-boxing to the accordion is a charming innovation that is sincerely delightful. She can trumpet her lips, warble her tongue, roll her rs, yodel a bit, and make whatever kind of sound a slug might make if it were trying to speak.

Her music is playful. She's like a kid discovering all the sounds that her mouth can produce. Hers are novelty songs, simple songs with cute lyrics and surprise punch-line endings. In her thick accent, she sings about butterflies, apple pie, or her true love, Antonio, her sparkly, red accordion (he's very flexible).

Swart's fashion style is carnival chic. She has a sweet-sexy flair, sporting black fishnet stockings, a pixie haircut, and black, worn, East Village lace-up boots. A centerpiece of her look is her fanciful homemade skirt made of men's neckties. With clashing colors and sewn inside out, the ties, it is implied, are like feathers in her cap, telling the tales of men she has known and loved.

In one number, she sings, I've got pepper in my boots and bubbles in my brain. Her disposition is just a little too bubbly, a little too light on the pepper. And where's the meat? With her effervescent bubbliness, it is no surprise that she is married to The Marsh's Sunday morning Bubble Man, Louis Pearl, who is a children's performer. She, too, is child-friendly — responsive, jovial, and chirpy. But her lyrics are not always G-rated. She sings about the simultaneous orgasm of the hermaphrodite slug. She sings about bestiality and rat poison murder of her guru lover (rhyming karma with shawarma) and another song about a rooster who is a foul-mouthed hip-hop cock.

Her hands-down most entertaining number is an original interpretation of Michael Jackson's "Billie Jean." With her accordion and her over-the-top vocal theatricality, the pop song becomes a baroque saga of love's darker consequences. Swart balances the absurdity and the surprising appeal of this cover nicely.

Indeed, one wishes she would cover more pop songs. Her approach to whimsical cabaret is promising; it's her material that is wanting. Her musical style has been compared to Nina Hagen and Piaf, and I also hear a resemblance to Lene Lovich in her baroque vocalizing and exotic, full-throttle idiosyncrasies.

Jet Black Pearl does nothing if not aim to please. Like a street musician worried the passersby will move on, she's a little desperate to keep us entertained. Overly solicitous and eventually somewhat grating, Jet Black Pearl, like a mime, is brimming over with what may or may not be your cup of tea.

For those eager for an encore — and those who'd like to see more accordion-clasping pin-up babes — 2012 will end with an Accordion Babes Pin-Up Revue. On December 1, a plethora of West Coast accordionistas will perform at the Rhythmix Cultural Works in Alameda. The revue will include five of the twelve months of accordion-enhanced hotness.