The members-only dining community gives chef-owners an opportunity to tell their stories, experiment with new dishes, and gain valuable feedback from guests. 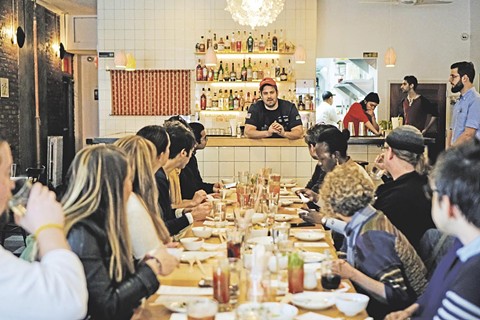 Ever wished you could sit down for a leisurely six-course meal and, in between courses, hear from some of the most acclaimed chef-owners in Oakland? Tasting Collective might be able to help.

Tasting Collective is a membership-based dining community that was started in New York City by founder Nat Gelb, who felt that dining experiences in the city were missing an important element of human interaction. Many restaurants, Gelb said, rely on a business model that requires them to turn over as many tables as they can in one night, meaning that there's little opportunity for chefs to share their stories.

But at Tasting Collective events, which take place approximately every two weeks, members take over an entire chef-owned restaurant — typically on one of the restaurant's slower nights — and enjoy a six-course family-style meal. The experience gives chefs a chance to showcase the restaurant's most popular dishes, try out some experimental dishes, and tell their stories. After the meal, guests provide their feedback to the chef and participate in a Q&A with the chef. Tasting Collective has since expanded to several cities across the country, including San Francisco in June 2018 — and recently, the San Francisco chapter has begun to partner with chef-owned restaurants in Oakland.

In January, Tasting Collective's San Francisco chapter held its first Oakland event at Pucquio, the Rockridge Peruvian restaurant led by chef-owner Carlos Moreira. The menu featured a couple of Moreira's classic cebiches, plus dishes like a five-spice poussin and a marinated pork loin with pork shoulder beignet. On March 6, Tasting Collective returned to Oakland once again, this time at chef-owner Kyle Itani's Uptown Japanese-influenced American restaurant Hopscotch. The menu there included Hopscotch's signature Yonsei oyster and buttermilk fried chicken, as well as black cod with roasted broccoli rabe and beluga lentils and andouille sausage and shrimp gumbo. The next Oakland restaurant in the lineup is chef-owner Silvia McCollow's Mexican restaurant Nido, though the menu and date are still being finalized.

Gelb said he's excited about the San Francisco chapter's expansion to Oakland, where he believes the often less-expensive real estate prices make it possible for more independent, chef-owned, creative restaurants to operate at Tasting Collective's $50 price point. Plus, Gelb added, he's excited for chef-owners in Oakland to be able to share their stories.

Annual membership fees for Tasting Collective normally cost $165, but are currently $115 in San Francisco. Once they've paid the annual fee, members can purchase tickets to brunch events for $35 and six-course dinner events for $50, not including tax and tip. (Gelb added that Tasting Collective runs entirely on membership fees, and doesn't make any money off the tickets — all ticket sales go directly to the restaurants.) Tickets for nonmembers are available for $25 more, though nonmembers must be accompanied by a member. Memberships also include special perks at partner restaurants, such as a discount, free drink, or dessert, which can be redeemed when visiting those restaurants outside of Tasting Collective events. To learn more, visit TastingCollective.com.