In addition to the 45 or so Bay Area acts in Austin last week, there was another 1,650 or so bands that occasionally one might want to see. Screw Stone Temple Pilots, Courtney Love's icky Hole, or even Wu-Tang's GZA; the true champ among them was Smokey Robinson — the Smokey Robinson — opening up for Sharon Jones & the Dap-Kings, a band whose name you should know by now. Many in the crowd hadn't, and Sharon knocked their socks off. 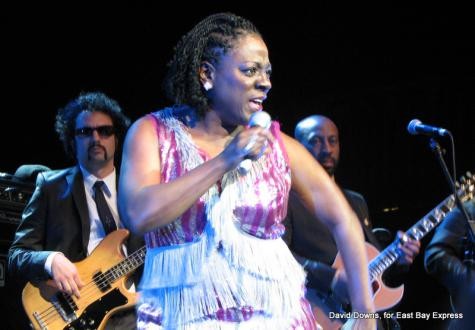 First, Smokey. He's freakin' Smokey Robinson, one of the greatest songwriters to ever live. His career was longer than Michael Jackson's life, and Friday night at the Austin Music Hall before a crowd of thousands, the seventy-year-old celebrated Motown Records' 50th anniversary with classics like 1979's “Cruisin”; the audience split down the middle and battled out the chorus of I love it when/we're cruising together. “The Tracks of My Tears” proved Robinson still had the pipes to get it done, even though his face looks like he’s had a little too much plastic surgery. Robinson’s show was as silky-smooth as his skin these days; the singer wore all black, while his nine-piece band was dressed in all white — classy. His bizarre cover of Norah Jones’ “Don't Know Why” — a song about a woman's failure to orgasm — turned out surprisingly sweet. Robinson performed some songs from his latest album of original material, Time Flies When You're Having Fun, and, indeed, time flew so fast Friday night that when Sharon Jones came on it was 12:38 a.m., almost forty minutes past her set time.

Fifty-something Jones was a session soul singer turned Riker's Island Corrections Officer, until new vintage act the Dap Kings reanimated her career in 2001. With her latest LP of new material, I Learned the Hard Way, just weeks from releasing to what will be very positive reviews, the nine-piece was on fire at SXSW, playing triple and quadruple the number of events of any other band. The 1 a.m. performance was Jones' third of the day, and she still went at it with more tenacity than any rested indie band. Title track “I Learned the Hard Way” is pure dynamite live, an original, daringly structured track that feels as if it was beamed directly out of the late Sixties. The structure is so tricky the band flubbed one of the transitions — likely a consequence of exhaustion — but recovered gracefully. Up-close, it's apparent that the Dap-Kings have an entire grammar of eye contact at their disposal. They are the pinnacle of the profession and they simply could not be frazzled as Jones shimmied, cajoled, and howled her way deeper into a late-career renaissance defined by winning over new fans one stunned soul at a time.