The actual eye on the actual art. 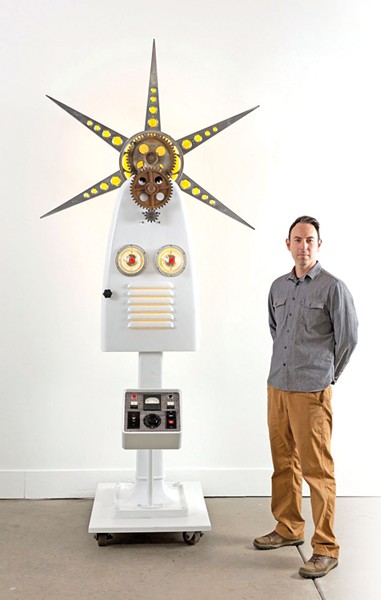 As the pandemic drags on, art lovers and artists alike yearn to regain that direct connection. Virtual gallery tours, while welcome and, in many cases, imaginatively created, can only ever be second best.

Then there is basic economics. If artists can't show, they can't sell—and many planned exhibitions have been pushed back indefinitely or canceled. Taking all this into consideration, Oakland Art Murmur (OAM), in partnership with Immersive Arts Alliance (IAA), tweaked a concept OAM had already formulated: Find a way to use the windows of the many empty retail spaces in downtown Oakland as temporary installations.

"Over a year ago, I had a conversation with a woman who manages retail space for Colliers International," said Jean Marie Durant, president of OAM's board of directors, referring to the giant commercial real estate firm. Even before the pandemic started, Oakland had "such an active art community and not enough [gallery] spaces," she said.

Other entities, including the Oakland Chamber of Commerce and the Jack London Square Neighborhood Association, became involved in the conversation, and it was through the latter that Durant connected with Clark Suprynowicz, executive and artistic director of Immersive Arts Alliance.

Although OAM focuses on traditional fine arts forms, and IAA, as its name indicates, on experimental, often multi-media, experiences, common ground was instant for what emerged as the Oakland Storefronts Initiative.

Yet, the process to make it happen was complex, both Durant and Suprynowicz said. Some store owners had boarded up their windows—and those boards had sometimes been transformed into murals and paintings reflecting the Black Lives Matter movement. "We needed to be respectful of the art that had been done," Suprynowicz said. OAM and Durant, working with the Oakland Museum of California and the Black Cultural Zone, helped to store and preserve more than 100 of the existing murals.

Outreach to store owners and leaseholders "took all summer and part of the fall," Suprynowicz said. But by October, the first storefront, 4700 Telegraph Avenue, was secured, and the first installation, Sally Weber's FLUX, was in place.

The two arts organizations reached out to a range of Bay Area–based artists. "The caliber of the artists is outstanding," Durant said. "These are artists who are nationally and even internationally known." Weber's installation was selected as the inaugural exhibition because she "had the work in her studio," Suprynowicz said. FLUX had been created for a previous exhibition, "Elemental," some years ago.

"I was thrilled to be asked," Weber said. "Presence in art is everything. The ability to see it dimensionally ... it's like the difference between a Zoom meeting with a friend and meeting them for a cup of coffee."

FLUX utilizes 19 ultraviolet lasers and pendulums, which trail light over three sandboxes seeded with elements that pick up the colors, retaining for moments a "light trace." It was inspired, Weber explained, by the way photons are constantly in motion. "It suggests the kind of vibration that is always with us all the time," she said. "It is always fading and always renewing."

All the components making up FLUX were developed by Weber in her studio, including the program that allows the piece's constant change.

The artist has had the opportunity to observe passersby looking at and reacting to FLUX. "It's always a pleasure to see what they see," she said. Children especially are fascinated by it. "There is a sense of wonder." Durant noted that there are QR codes on the exhibit's window that, when scanned, provide more information about what the viewer is seeing, including artist contact information.

FLUX will remain in place through mid-November, and can be viewed each evening from 6–8pm. The next featured artist is Chadwick Heath Moore, whose sculptures incorporate found objects. That exhibition is slated for December.

In his artist statement, Moore writes, "My mother, who worked at Walmart for many years, told stories of fights that broke out during Black Friday sales. Often the sheriff's department needed to intervene. These stories seemed outrageous, but were true and, in a way, encapsulate my interest in consumer culture. In how the things we buy, whether necessary or not, take root deep within our psyche and become a part of us...In my sculptures and installations, I use discarded materials of all types, like plastic bags and bottles, broken furniture and tattered clothes. I start with a framework usually made of something solid like a lamp stand then add a skeleton made of wire. The various materials are attached to the frame. The lightness and flexibility of the materials allow for a great deal of spontaneity while working which I really enjoy."

Other artists scheduled for exhibition in the Storefronts Initiative include Nemo Gould, Richard Nelson, Joty Dhaliwal, Dan Webber and Shaghayegh Cyrous. The project will run throughout 2021, and Durant and Suprynowicz hope to continue it for longer. To that end, OAM and IAA have created a GoFundMe account, with an initial $25,000 goal. All of the proceeds from the account will go towards production, installation and artist compensation. The GoFundMe page, https://charity.gofundme.com/o/en/campaign/the-storefronts-initiative, also includes a video showing FLUX in motion, along with commentary from Durant and Weber.

"This is Phase One," Suprynowicz said, indicating that the organizations will also seek underwriting from appropriate entities. OAM and IAA also continue to look for additional spaces. "We are in conversations with spaces in Jack London Square and Rockridge," Durant said. Suprynowicz mentioned a large lot next to the Oakland Tribune building, already used for some arts activities, that he would like to explore the possibilities of.

Durant shared a vision of a "mile long" downtown walk, incorporating multiple storefronts. As the GoFundMe page explains, "A storefront creates an identity for a location, and tells us what is for sale there. Art creates a transaction where money may not change hands. We expect from art something less fungible, harder to quantify, occupying a special place in the sphere of human invention."

"This is a unique and very accessible way for people to engage with both fine art and the neighborhood," Durant said.

The Storefronts Initiative project, Suprynowicz said, is both a means to "find a way to still be here" for artists and arts organizations trying to survive the pandemic, and "a recognition that people need to have art in their lives."