San Francisco singer-songwriter Sonny Smith has always taken a character-driven approach to his music. In fact, he began his music career while working on a screenplay for a movie. With his guitar nearby, Smith ended up turning dialogue and plot structure into songs. He did residencies writing plays in which he sang songs in character. He often assumes the persona of a fictional character or sings dialogue, or features guest singers as characters in his songs.

So it wasn’t a huge stretch when Smith was attempting to write a novel last year that incorporated fictionalized singers and musicians that then tempted him to think about what their album covers might look like, and songs might sound like. He thought it’d be cool to write fictional songs for the fictional characters, and applied for and received a five-week residency at the Headlands Center for the Arts to pursue the idea. “Once I got there I started writing some songs and I fairly quickly sort of found out the job of drawing other record covers [should go] to an artist,” he said. He assigned a couple of the covers to some artists who were also at the Headlands at the time, and realized his sketches weren’t sufficient. “I can’t have rough sketches and one really incredible piece,” he surmised. Likewise, the songs couldn’t be rough either. “So that’s where it quickly went to the next level from my original idea, what I was thinking it was going to be,” he said. “The novel got shelved immediately because once I got artists to work on the record cover it wasn’t hard to see that this was the project.”

Fitting with Smith’s ambitious nature, he decided to commission 100 different record covers and write 200 songs (two per record). A little more than a year after starting the project, Smith will celebrate the finished 100 Records project with a show at Gallery 16 (501 3rd St., San Francisco), which displays the art show until May 31. The opening reception happens Friday, Apr. 9, from 6-9 p.m. A jukebox will spin all 200 songs and Smith will perform with his band, the Sunsets. 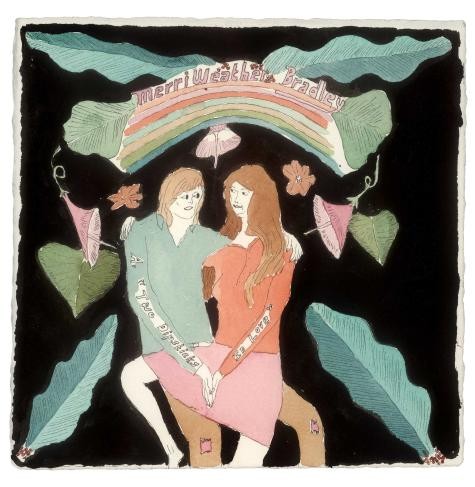 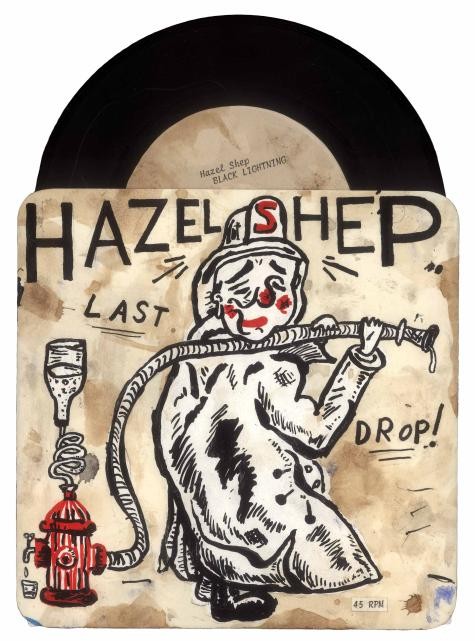 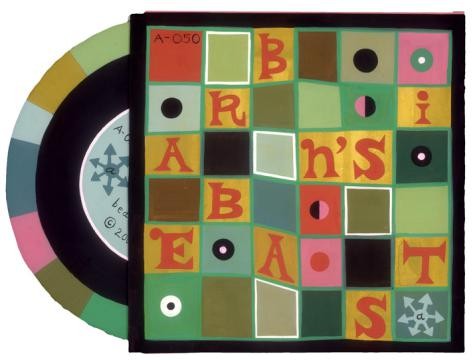 Smith says that for the most part he kept the art-making and songwriting processes separate. He supplied the artists — including William Wylie, Mingering Mike, Chris Johanson, Reed Anderson, Jo Jackson, Harrell Fletcher, Chris Duncan, Tucker Nichols, and Paul Wackers — a list of the fictional bands he created and the names of their albums. After artists chose their band and album title to illustrate, Smith would simultaneously go about writing the songs on his own. “The show is what their fantasy of the album cover would look like,” he said. “Will it be incongruent or cosmically on the same page? More often than not, they really work well together.”

Contrary to what one might envision, Smith said he didn’t come up with band names based upon genres. “I tried to not fall into some sort of cliché where it’s, like, here’s my reggae band, here’s my country band. The band names and the songs and what kind of music they made — it wasn’t categorical in nature, it was all rather organic. I would come up with a band name like the Fuckaroos — they kinda sound like some sort of janky Sir Douglas Quintet band — a little rough around the edges.” In tandem, he’d also write short bios for them. (The Fuckaroos started in 1968 in Cincinnati.) Then when he started recording songs, it would become obvious which band it was for.

Naturally, some bands were more inspiring than others. For example, Smith said he wrote a whole album’s worth of material for Zig Speck and the Specktones — but had a harder time writing for Connie’s Superette Crew. None of the bands were extreme deviations for Smith’s “safe zone” of songwriting, except for Walter “the Goat” — a “Jamaican dude” he imagined once part of Lee Scratch Perry’s Black Ark in the 1960s, who then relocated to Cambodia. “I was trying to come up with the freakiest weird music that would fit this guy’s storyline,” said Smith. “I won’t reveal what I did, but I think I pulled it off.”

Smith wrote all of the material, and enlisted musicians to help him record, including Rusty Miller, James Finch, Kelley Stoltz, and others; guests included Tim Cohen from the Fresh and Onlys, Ty Segall, Heidi Alexander and Grace Cooper from the Sandwitches, and (still to be recorded) Bart Davenport. At least three boxsets are planned to be released in the next four or five months, said Smith, but not all songs will be available. After all, “they’re not all hits.”

Despite the ambitiousness of 100 Records — which is still getting its finishing touches — Smith says he already has another project in mind. He wants to do an installation of the album-making process called “Record Plant,” which would include everything from initial songwriting to a trip to the lawyer’s office and a suitcase of drugs. Patrons would order a song, an artist would make the record cover, Smith would write the song, and the end product would be purchasable. “That could be fun,” he surmised. “If I get through this, I’ll do that.”