Mason C./Yelp One condition of the city permit: Staying off Oakland Tech's lawn.

A week after Oakland police shut it down, Bites on Broadway is back. Yesterday, organizer Karen Hester got a permit from authorities to resume the month-old Temescal street-food gathering — with conditions.

This week Hester had three discussions with authorities: Pete Espinoza and Michael Poirier of the Oakland Police Department, and Arturo Sanchez, assistant to the city administrator. They allowed Hester to obtain a one-time permit for tonight’s event, with the condition she limit the gathering to five vendors and stay off the lawn at Oakland Technical High School. Hester told What the Fork that tonight’s Bites on Broadway vendors will set up on the northern curb of 45th Street and away from Oakland Tech, just outside the Kaiser Permanente parking lot at 45th and Broadway. According to Hester, the Oakland Unified School District is concerned about possible liability in the use of its lawn. 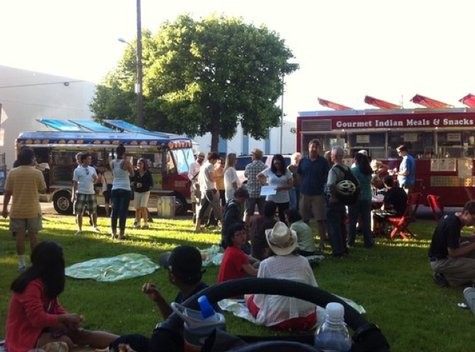 Hester predicted that, without a lawn for picnicking and socializing, customers at tonight’s event probably won’t linger. But she’s encouraging attendees to gather at the nearby Temescal Creek Cohousing Community on 45th Street, where Hester lives, and where she plans to set up outdoor tables with limited seating.

Hester will have to renew the $100 permit every week, pending review of how well she’s kept to the conditions and whether or not authorities receive complaints from neighbors. Hester said OPD has not divulged the source or nature of the original complaint, the one that caused officers to shut down Bites on Broadway on the evening of July 1. Since it launched June 10, Hester has organized the event without permits, claiming informal permission from authorities. City rules don’t allow clusters of mobile food vendors, except for special events like street fairs and other festivals.

To make up for the cost of the permit, Hester said she plans to charge vendors $75, up from $50. If Hester keeps to the conditions of her permit tonight, she’ll be able to have seven vendors next week on July 15.

Hester said the city would like to see the event move around the corner to Broadway in front of Oakland Tech, where there’s less risk of street congestion, but that would require permission from OUSD, since it would almost certainly mean spillover onto school grounds. “I always wanted it there anyway,” Hester said of the Broadway location, “both to give us real visibility and to do something about the blight on Broadway.”

Tonight’s vendors are Grilled CheezeGuy, Jon's Street Eats, Cholita Linda, Doc's of the Bay, and Breads of India. The event begins at 5:30 p.m.