OUSD, like the city itself, is highly segregated. But unlike Berkeley, Oakland has never attempted to desegregate its public schools. 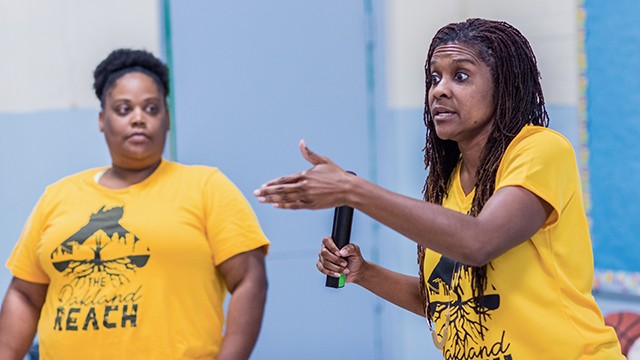 Lakisha Young’s grandmother was 22 when she decided to move with her four children from Mississippi to San Francisco in 1964 to provide a better life for her kids. Young’s mother also had hopes and expectations for her children to go beyond her own achievements. Young went on to college, the second in her family to do so, and eventually earned her master’s degree in educational technology.

“I’m a firm believer that no matter where you grow up, education is a game-changer,” said Young, who is now the executive director of The Oakland Reach, an organization that aims to empower parents in underperforming schools to advocate for their children.

Young points to the differences between parents in the Oakland hills and those in the flatlands as the primary example of disparities within the Oakland Unified School District, or OUSD. Parents in the hills generally have more money, more time to be involved in their kids’ schools, and more influence in the district, she noted. And over the years, Oakland hills have been home to some of the highest performing public schools in the region, while flatlands schools have struggled.

Oakland, in other words, has long had a separate and unequal educational system within its public school district, with students receiving disparate opportunities depending on the zip codes in which they live. The stark differences have also historically broken along racial lines.

Many white families in Oakland have long avoided the public school system altogether, choosing to send their children to private schools. But even the white families that do enroll their kids in OUSD tend to do so in segregated schools.

In short, white students in Oakland are concentrated in a few schools throughout the district, including charter schools, where they are the majority.

Yet despite Oakland’s highly segregated school system and the city’s progressive politics, OUSD has never embarked on a full-fledged effort to desegregate. By contrast, Berkeley Unified has had a desegregation plan in place for more than 40 years. Originally implemented in 1964, Berkeley’s program has been touted by academics and advocates alike.

Is it time for Oakland to finally copy its neighbor to the north?

Ron Towns and Zach Bell founded Camp Common Ground with the explicit goal of disrupting the racial, ethnic, and socioeconomic segregation in Oakland. The camp, aimed at middle-schoolers, is a two-week program during which students identify a person or group of people who they see as isolated or underserved by their community. The kids then create a “plan for disruption” to take back into their schools and attempt to make a change. The goal is to reach a new generation of Oakland residents to fight segregation and change the dynamics of the city.

Towns said the skills they teach their students at the camp are directly related to the skills that are necessary to make real change. To him, that change happens when the kids can identify their differences and the perspectives that stem from those differences, and not isolate those other groups.

“It’s about having the skills to ask questions of people to understand their perspective and being able to critically listen to that and not just trying to push your opinion,” said Towns.

Towns and Bell are teachers in the Bay Area. Towns is a sixth-grade instructor at Gateway Public Schools, a group of charter schools in San Francisco, and Bell works at the Oakland School of Language, a dual-language middle school. Throughout his 10-year teaching career, Towns has witnessed rifts in gentrifying neighborhoods. He says the camp has also tried to address distrust that develops among racial groups.

Such rifts often come up during enrollment. OUSD has a lottery-style system of enrollment that was adopted about 15 years ago and is designed to allow low-income students to attend higher-performing schools but has largely failed. Charles Wilson, director of enrollment in the district, explained that the system requires parents to rank schools that they would like their child to attend. If the child has a sibling already attending a school, then they get first priority at that campus. Second priority goes to students who live in the school’s designated attendance zone. Children who do not live in the neighborhood or have no siblings in the school have the lowest priority for attending the school of their choice.