[This story has been updated at the bottom.]

Is the mere image of the seven-bladed cannabis leaf enough to corrupt young minds? On Facebook it is.

JustSayNow.com — a group working to "make sure marijuana reform isn't neglected this election cycle" — tried to launch ads last week on Facebook.com for its new campaign "Don't Forget Marijuana". "The ads featured President Obama, Mitt Romney and images of marijuana [leaves] alongside a message encouraging people to join the campaign," they wrote in an online statement. 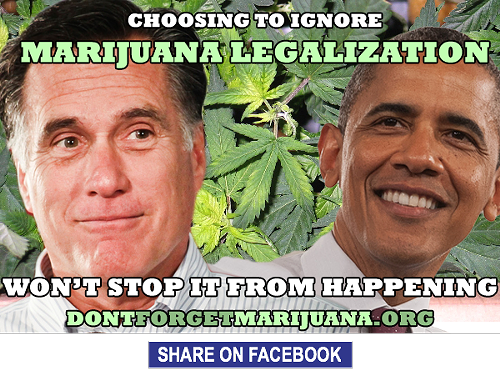 "Facebook rejected the ads on the ridiculous grounds that the simple act of showing a marijuana leaf promotes drug use," JustSayNow stated. So they're asking folks to sign their petition at progressive website Firedoglake.com to protest Facebook's censorship of the "marijuana reform movement's voice."

"We, the undersigned, believe Facebook should not censor marijuana imagery in ads aimed at changing US drug policy.

Marijuana reform is not a fringe issue, and banning the use of marijuana imagery in political speech is like denying a candidate the use of their face in a campaign.

Facebook should amend its advertising policy so as to not censor those engaging in protected political speech like the Just Say Now campaign to end marijuana prohibition."

Existing Facebook terms of use for advertisers say that "ads may not promote or facilitate the sale or consumption of illegal or recreational drugs, tobacco products, or drug or tobacco paraphernalia."

The only mention of politics is in a section that states "ads may not contain content that exploits political agendas or "hot button" issues for commercial use."

So: Does a pot leaf in a JustsayNow ad promote the sale or consumption of an illegal, recreational drug? Marijuana is legal in seventeen states and Washington D.C., and JustSayNow aims to promote a political dialog, not consumption.

Facebook's a company and it can do whatever they want with its site, of course. But it seems prudent to let legalizers use the leaf in political speech, at least in ads displayed to those eighteen and over.

(Because, of course, no one under eighteen is being exposed to cannabis-related advertising in pop culture today! SURELY!) 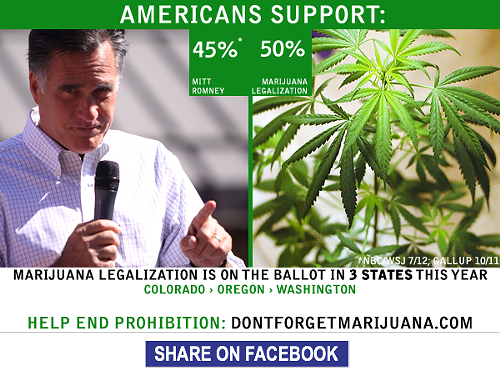 UPDATE 08/14/12:
Apparently Facebook is relenting. Just Say Now organizer Brian Sonenstein tells Huffington Post in an update yesterday evening that 15,000 people signed a FireDogLake petition to end the censorship, and the cause was taken up by the Electronic Frontier Foundation and the American Civil Liberties Union.

The EFF and the ACLU went to bat for Just Say Now, and Facebook quickly backed down, admitting they were out of line censoring Just Say Now ads. Advertising pot is different than political speech about drug policy reform, Facebook admits.

"Their position was very clear — and we certainly applaud it — which is that Facebook is a neutral platform," [ACLU's Linda] Lye told HuffPo. "It does not weigh in on political advocacy, and it was a mistake to reject the ads."

"They did the right thing here," Electronic Frontier Foundation's Rainey Reitman told The Huffington Post. "But this is just going to keep coming up again and again both on Facebook and other sites as more of our political discussions and our societal discussions kind of move in to these online spaces."